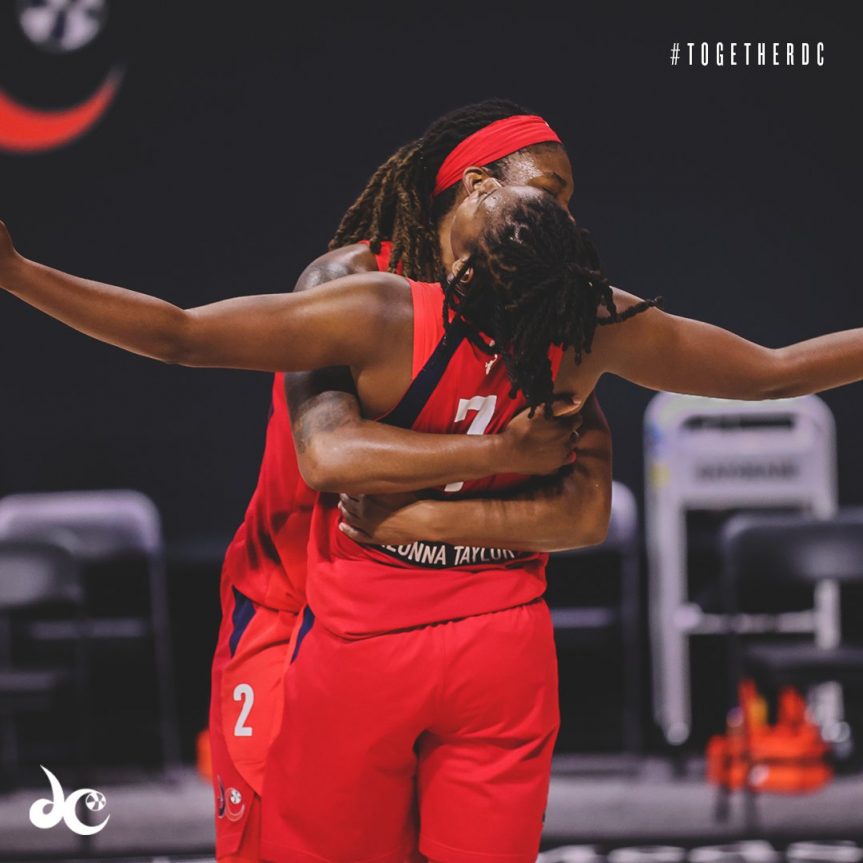 WASHINGTON — A seven-game losing streak, being without most of last season’s starting lineup, and experiencing numerous injuries and setbacks didn’t deter the Washington Mystics from making the late-season push for a playoff spot.

The defending 2019 WNBA champions closed the regular season on a three-game winning streak to notch a No. 8 seed in the league standings for a playoff berth.

Myisha Hines-Allen, just voted the WNBA Player of the Week, finished with 25 points, 11 boards and four assists, and Ariel Atkins recorded 18 points and five steals to guide Washington to a comfortable 75-58 win over the New York Liberty on Sept. 12.

On Sept. 13 in the regular-season finale, Atkins led the way with 26 points and five assists, Hines-Allen had 16 points and 10 rebounds, and Emma Meesseman added 14 points and seven assists as the Mystics picked up an 85-78 win over the Atlanta Dream.

Due to a loss to the Chicago Sky, the Dallas Wings dropped from an eighth seed to No. 9 and were consequently eliminated from postseason competition. The Mystics (9-13) won four of their last five games, a significant bounce back from losing 12-of-13 in the middle of the season.

While Atlanta (7-15) shot better from the field and pulled down more rebounds, Washington was a perfect 18-of-18 from the free-throw line and committed only two turnovers to the Dream’s 11.

Betnijah Laney got Atlanta off to a strong start, but the Mystics matched the intensity and held a slim 44-43 lead at halftime.

Carried by Atkins, Meesseman and Hines-Allen, the Mystics led 79-74 with a minute remaining in regulation. Atkins, the only returning starter from last season, knocked down late free throws to help Washington secure the win.

Before the win over Atlanta, the Mystics outplayed the Liberty in virtually every quarter to come away with the 17-point victory.

In addition to big performances from Hines-Allen and Atkins, Leilani Mitchell poured in 12 points for Washington. The Mystics began the afternoon against New York on a 9-0 run, and it was smooth sailing from there as they led for the rest of the game except for an 11-11 tie in the first.

By the end of the third, Washington had a 57-40 lead and was on its way to redeeming itself from a loss to the Liberty earlier in the season. Kia Nurse and Kiah Stokes scored 15 apiece and combined for eight rebounds for New York (2-20).

The WNBA playoff will follow the same traditional format, even though the regular season was abbreviated. The first two rounds will be single-elimination games; then, a best-of-five series will take place in the semifinals and finals.

Washington will square off against the Phoenix Mercury on tonight at 9 p.m. to open the playoffs. When the two played during the regular season, Washington dropped back-to-back games on Aug. 23 and Aug. 28 to Phoenix, 88-87, and 94-72.

“But I think we’ve learned from what we’ve done the last 10 days or so, and I think it will help us on Tuesday,” he said.

“I think it’s such a reward to get in, regardless of what happens going forward. You know, making the playoffs, there’s that kind of dividing line for teams and to go through what we’ve done without five players and have other people step up – that’s just the rewarding part of coaching.”