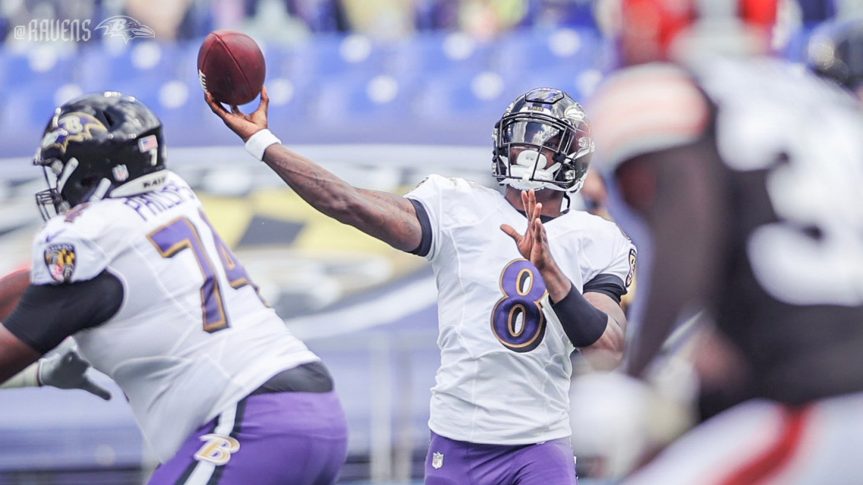 BALTIMORE – Coming off a breakout season where the Baltimore Ravens led the NFL with 14 wins in the regular season, the AFC North favorites looked to continue their regular-season dominance.

Hosting the Cleveland Browns, the combination of forced turnovers and early offensive success was enough for the Ravens to dominate the visitors, winning their home opening 38-6 Sunday.

While they played in an empty M&T Bank Stadium, the Ravens relied on their play to fill the void. Regular energy boosts and moral support generally attributed to the fans were now their responsibility, head coach John Harbaugh said.

“The incredible of support from our fans that we normally have wasn’t there, and it was different,” Harbaugh said. “I felt like our guys did a great job of bringing their energy.”

It did not take long for the Ravens (1-0) to make its presence known against quarterback Baker Mayfield and the Cleveland offense. Less than three minutes into the first quarter, defensive end Calais Campbell tipped an attempted pass, allowing cornerback Marlon Humphrey to make a diving catch for the Ravens’ first interception of the season.

In their first offensive drive of the season, the Ravens drove down field in eight plays. Quarterback Lamar Jackson capped off the series with a 5-yard touchdown to tight end Mark Andrews.

The Browns (0-1) offense attempted to bounce back right away but went three-and-out on their next drive. They tired a fake punt, but it was fumbled and recovered by Baltimore’s Anthony Levine Sr. The Ravens quickly capitalized with a 41-yard field goal by Justin Tucker to go up 10-0 midway through the first quarter.

“B.Y.O.E.: Bring your own energy, and that’s what we did today,” Campbell said. “Our coach did a good job of getting us prepared, and we have a lot of veteran guys on our team who kept bringing the energy for us.”

Cleveland found some life after running back Nick Chubb broke free for a 29-yard run. Mayfield found David Njoku for a 1-yard touchdown pass for the Browns’ only score of the game. Baltimore limited the Browns to 306 total yards and forced three turnovers. Wide receiver Odell Beckham Jr., one of Cleveland’s primary targets, was limited to three catches for 22 yards.

“This (Browns) offense is very good, and the fact that we did contain their weapons was the key,” said Harbaugh.

On the offensive side, the Ravens tacked on 14 more points in the second quarter. Rookie J.K. Dobbins rushed for his first career touchdown on a 3-yard carry with three minutes remaining before halftime.

In the final seconds of the half, Jackson and Andrews connected again on a 9-yard touchdown.

Baltimore extended their lead with 7:54 left in the third quarter as Jackson found Willie Snead IV for a 19-yard touchdown to extend the lead by 25 points.

Later in the third, Ravens first-round pick Patrick Queen forced Chubb to fumble an attempted carry, which was recovered by linebacker L.J. Fort. Queen finished his first professional game with a team-leading eight total tackles, a forced fumble and a sack.

“I very felt comfortable going into this game. The coaches prepared me the best way they could,” said Queen. “I just felt like I was at home.”

Following the Browns fumble, Baltimore added another score as Dobbins rushed in his second touchdown of the game off a two-yard carry.

Jackson finished the game throwing 20 of 25 for 275 yards and three touchdowns. He also rushed for a team-leading 45 yards.

“Lamar Jackson just played a phenomenal game,” Harbaugh said. “He was probably the biggest difference in the game.”

Dobbins rushed for two touchdowns with his 22-yard output. Marquise Brown led the Ravens with 101 receiving yards, while Snead and Andrews contributed 64 and 58 yards, respectively. Andrews led the team with two receiving touchdowns.

The Ravens will travel to Houston to play against the Texans next Sunday. Houston lost their season-opening game Thursday night against the Kansas City Chiefs, 34-20.