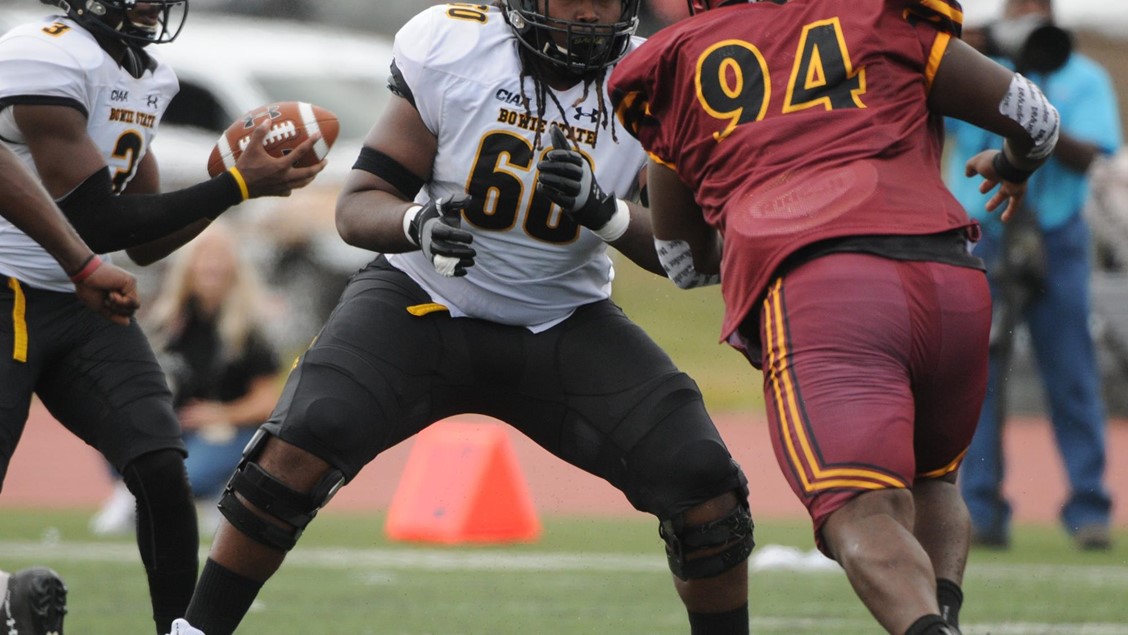 Every Thursday, Bowie State University Department of Athletics, will spotlight one student athlete in wake of COVID-19 pandemic that forced CIAA to suspend fall competition until the spring of 2021. This week’s limelight will feature redshirt senior Justice Davis—a 6-foot-0 lineman on the football team—from Washington D.C.

Davis loves football and for many reasons: The ability to be extremely physical without receiving any retribution. The aspect of winning. And the fun of proving teams—who tend to underestimate their opponents—wrong. Though Bowie State has enjoyed consecutive winning records since 2015 and has captured the CIAA championship the past two seasons (2018 and 2019), Davis still feels the program does not garner enough respect.

As a lineman, Davis models himself after Quenton Nelson, a Pro Bowl offensive guard for the Indianapolis Colts. During their games, Davis pays the most attention to Nelson’s footwork and aggressiveness when it comes to protecting the quarterback. Davis says offensive coordinator, Tyrae Reid, highly prioritizes its ability to protect their quarterbacks.

“We definitely try to limit as many sacks as possible. That’s something he’s really affectionate about,” Davis said.

In his downtime away from football, Davis is an active and social being. He likes to do different activities with his friends and hang out with his family. If he’s not sleeping, he’s likely trading in the Forex Exchange Market, cooking, or playing video games. He says his friends and teammates would describe him as a hard worker, a go-getter, and a person who respects everybody.

“My friends would tell you guys that I love everybody’s parents, everybody’s family. Most of the parents love me. You know, everybody knows who I am. I`m just that outgoing, talented, and hardworking guy,” Davis said.

During a phone interview with Bowie State Athletic Department, Davis shed light on his physical activity during the quarantine, how the team is handling the ongoing pandemic, and more.

How is the team preparing for the upcoming season that was delayed until spring because of the COVID-19 pandemic?
When it all started, we had to do the zoom meetings, and we just started back up on Monday. The coaches have been telling us to keep working—do the same stuff we would normally do in seasons preparing. There’s no room for breaks. There’s no room to be relaxed. Since we are one of the most dominating teams in the CIAA. So we have to act like it.

What have you been doing individually?
Individually when the pandemic first started, we always had at-home workouts. But at that time, I was recovering from an injury. Both of my knees had a slightly torn ligament. Since school started and things reopened, I’ve been working out and working night shifts at UPS. I work out with my trainer in this athletic training place, with a couple of other Bowie State players. I also talk to high schoolers about not giving up on your dreams.

When did the injury happen?
I would say probably before the season started. It started hurting a little bit more toward the middle of the season. I still played towards the end-of-the-season but not as much. When the season officially ended, I was able to get shots in both my knees. I feel good to go now.

What’s the biggest individual goal for you this season?
To make a mark on this terrain, and continue making history. Instead of having a two-peat, we can three-peat—and hopefully make it four times, five times, or even eight times—continuously. I want to leave my mark here as one of the offensive linemen who helped the program reach that point.

How would you feel if the CIAA decides to eventually cancel all sports this year?
If they canceled sports this year and we ended up playing next year, I feel that would give our football team a great opportunity to improve. I think, as though it’s always a menace. If something negative happens, it’s still going to result in a positive ending. No matter if the pandemic is enough to stop the season now, we can use that time to become better football players in our pursuit of getting a national ring.

What do you plan to do with your Criminal Justice degree, and why did you choose that major?
I want to work in the FBI, CIA, or secret service. Maybe DEA. I chose Criminal Justice because I feel that’s another way to help the community—and then—help people in general after the drama. I`m just a helpful person, and that’s my personality.

Do you have any aspirations of trying to continue your football career?
Yeah, my biggest thing has always been to make the NFL. I know it can happen. I’ve played with plenty of players who are now in the league. And even though they come from different schools, it shows it doesn’t matter what school you come from.

I feel as though you can still get seen—and I’m working as hard as ever—to make sure I can at least get the opportunity to make a team. If I do make it, I’ll make the best out of it. And I’ll never give up because I don’t believe you should give up on your dreams. Plus, I love football so much, and that’s why I want to continue playing.

So football is your plan A and plan B is following the criminal justice path?
Yes.

Based on Bowie’s recent football success, where do you see the program five, ten years from now?
That is a good question. I believe with the current coaching staff under Coach Wilson—someone I don’t see retiring anytime soon—I think 10 to 15 years from now, Bowie State will be one of the top schools in the country. And maybe even have the opportunity to move to Division I.