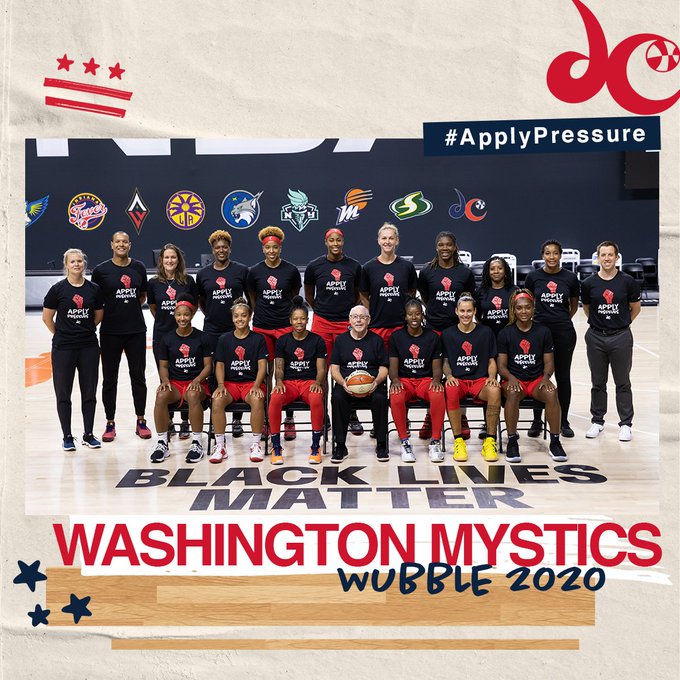 It only took one shot to end the comeback journey

WASHINGTON — What a game. What a season.

The Washington Mystics were in control the entire game until the Phoenix Mercury scored 17 unanswered points in the fourth quarter and capped off a stunning comeback effort with a buzzer-beating 3-pointer by Shey Peddy to win, 85-84, in the first round of the playoffs on Tuesday night.

The corner three by Peddy not only resulted in a devastating loss for the 2019 WNBA Final champions, but it also ended their season as the opening round of the playoffs are single-elimination games.

“Phoenix made a great comeback. They outplayed us in the fourth quarter. That’s what happens, tough way to end the season. One of the tougher losses I’ve had since I’ve been in Washington,” Coach Mike Thibault said after the disheartening loss.

The eighth-year head coach said he was proud of this year’s team, who posted a strong end to the regular season to seal a playoff spot despite the adversity they faced this year.

“I’m proud of what they did. They put themselves in this position and fought hard to get this spot and have a chance to advance, something a lot of people didn’t think we could do,” Thibault said.

“A lot of people thought we were going to get killed tonight and for three quarters of the game, we were in control and then all of a sudden we weren’t. I just told them how proud I am and that it will pay off in the future.”

For a portion deal of the game, the Mystics led comfortably and were on top 70-59 entering the fourth quarter. Phoenix’s Kia Vaughn knocked down a pull-up jumper, and Myisha Hines-Allen responded with a top put Washington ahead 73-61.

The Mercury’s next possession down the floor was the beginning of their 17-0 scoring run that changed everything.

Skylar Diggins-Smith made short jump shots from eight and 11 feet out, then drilled a 3-pointer off a Peddy assist, that reduced Phoenix’s deficit to 73-68.

Brianna Turner rebounded a shot attempt by Leilani Mitchell and got the ball into Vaughn’s hands, who put in a 19-footer followed by a 14-footer as the Mercury only trailed 73-72 midway through the fourth.

Washington committed a turnover, and the Mercury capitalized on the other end with a long 3-pointer from Diggins-Smith, which gave them their first lead of the night, 75-73, and the momentum didn’t stop there.

While attempting to even up the score, Kiara Leslie’s shot was blocked by Turner, who wound up finding Diana Taurasi for another 3-pointer that put Phoenix up 78-73 with four minutes remaining.

Up to that point, the Mystics were held to one field goal in the quarter. However, they did rally back to tie the game and reclaim the lead, beginning with a triple and an assist by Leilani Mitchell. The veteran guard led the way offensively for the Mystics in the final stretch, trying to steer her team to a fourth consecutive win.

Mitchell finished the night with a game-high 25 points to go with four assists. She scored seven of Washington’s 14 points in the fourth.

Trailing 82-78, Mitchell sank another shot from deep to bring Washington to within one. The next possession, Emma Meesseman, jumped the passing lane and got a steal that led to a breakaway layup that put the Mystics back up 83-82.

Diggins-Smith tried answering on the other end with a driving layup, but Hines-Allen drew a charge that gave the Mystics the ball back with 35.3 seconds left.

With time getting away, Phoenix was forced to foul Mitchell. She was 1-of-2 from the free-throw line, and the Mystics led 84-82 with 5.8 seconds remaining.

Following a 20-second timeout, Diggins-Smith caught the inbound, took three dribbles left, and reversed Peddy’s ball in the right corner. Peddy, with poise, pump-faked and heaved up the 3-pointer that went in and sealed the comeback victory for the Mercury.

“It’s unreal, man. I don’t know, like I really wasn’t expecting [Skylar Diggin-Smith] to pass it, and then something said, ‘you got enough time to up fake and get it up.’ I honestly just prayed that it went in,” said Peddy, who was just released by the Mystics about a month ago before being picked up by Phoenix.

Diggins-Smith had 24 points, six boards, and five assists, Taurasi recorded 23 points and six assists and Vaughn added 12 points for the Mercury, who advance to play against the Minnesota Lynx tonight at 4 p.m.

Meesseman scored 18 for Washington and played a pivotal role in her team’s 25-16 lead after the first and 46-35 halftime lead. Ariel Atkins also registered 13 points, and Hines-Allen poured in 11 points and nine boards in the season-ending loss.

The Mystics certainly had their share of ups and downs throughout the season.

They came down to the bubble with key pieces Elena Delle Donne, Natasha Cloud, LaToya Sanders, and Tina Charles out either due to medical or personal reasons.

They still fought with who they had and was riddled with injury (notably Aerial Powers and Stella Johnson) throughout the abbreviated season but were proud of what they accomplished nonetheless.

“It’s a tough one to swallow,” Mitchell said. “I guess you just kind of have to put the season into perspective, and you know, all the growth that we went through, and a lot of players really grew up a lot this season, and I think we’ll be better for it next year.”