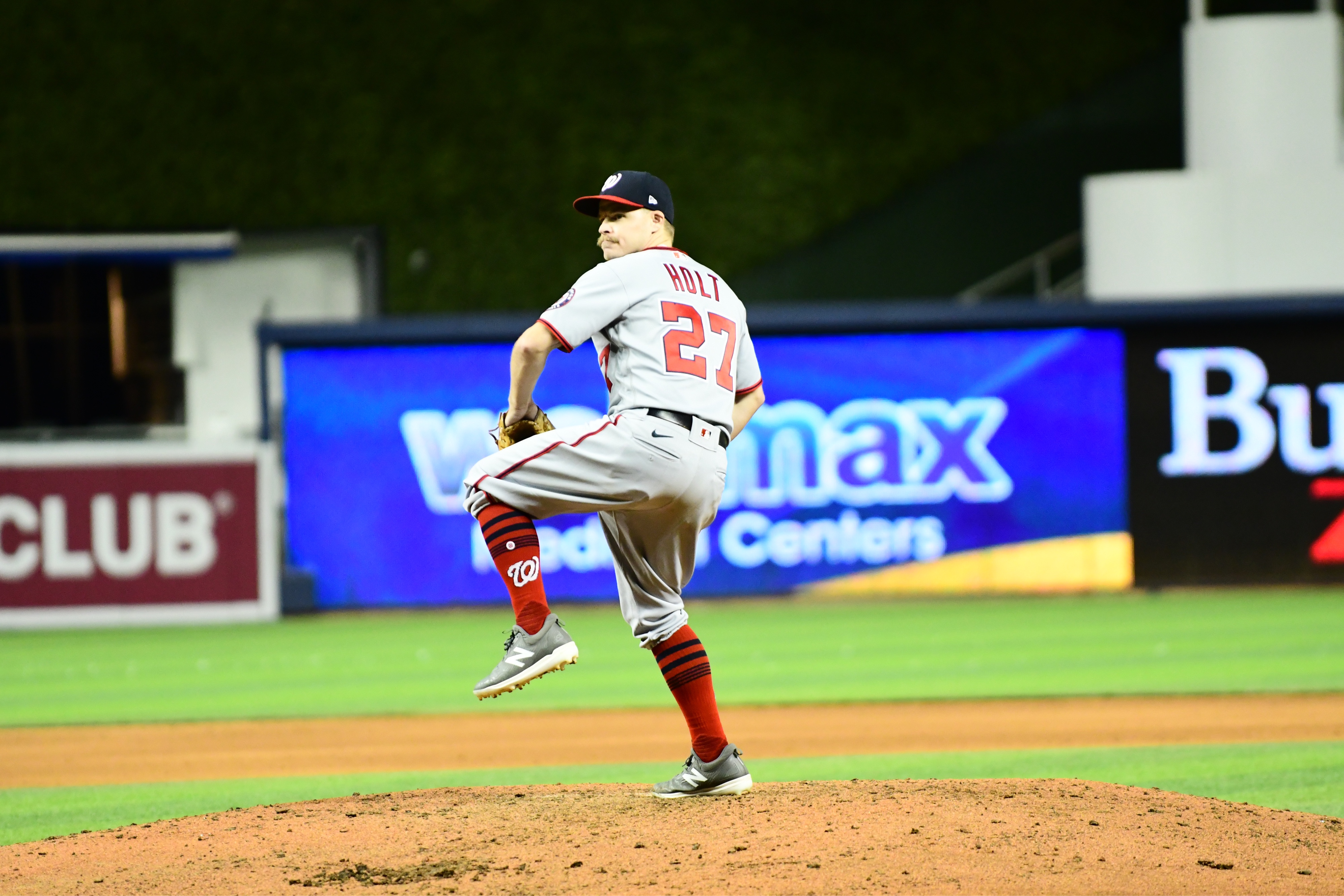 WASHINGTON – After winning four of their five games coming into this week, the Washington Nationals could not replicate such success. They lost five of their last eight games against the Atlanta Braves, Tampa Bay Rays and Miami Marlins.

Opening their four-game set at home against Atlanta, Washington jumped out to an early three-run lead. Trea Turner and Asdrúbal Cabrera connected with RBI triples, while Juan Soto drove in a run with a double to right field. In the second inning, Adam Eaton hit his fourth home run of the year, connecting a two-run line drive to center field, increasing their lead to five.

Despite an early 5-0 lead, the Nationals’ bats cooled down enough for the Braves to slug their way back in the game. Pitcher Austin Voth only surrendered three runs in a 4 1/3 inning performance, but Washington’s bullpen blew the lead by allowing three home runs. Tanner Rainey took the loss in the series opener.

“It’s a tough loss,” Washington manager Dave Martinez said. “We had the right guys in there in the seventh, eighth and ninth but we couldn’t get it done tonight.”

Sept. 11
Nationals defeat Braves, 8-7
Washington began the second game of the set just as they did in game one: scoring three runs in the first inning. Soto drove in two runs with a double to right field and came home on a single by Eric Thames. The Nationals extended the lead to 5-0 after two consecutive RBI singles by Soto and Yan Gomes brought in two more runs.

Atlanta answered back two runs in the top of the fourth inning, but Thames crushed a line drive to center field for a solo home run as Washington led by four runs. Gomes added an eighth-inning solo home run to give the Nationals a 7-4 lead heading to the ninth inning.

The visitors rallied to tie the game against closing pitcher Daniel Hudson, forcing the game into extra innings. After two scoreless frames, Michael A. Taylor connected with a walk-off RBI single to help Washington come away with the win. .

“I’ve been working on my two-strike approach,” said Taylor. “Once I got to two strikes, I just wanted to slow (the game) down.”

Washington did not have the offensive firepower for the third game of the series with Atlanta, only mustering up a single by Cabrera as their only hit through the first seven innings.

The Braves took advantage, scoring a run in the first and another in the fourth inning. Turner drove an RBI double in the eighth inning to put Washington on the board. They loaded the bases in the ninth inning but could not drive in a run to tie the game.

“Patrick did a good job of keeping us close,” Martinez said. “We had a chance. In the ninth inning, we had the winning run on second base; we just couldn’t pull it off.”

Sept. 13
Braves defeat Nationals, 8-4
With Max Scherzer seeking his 175th career win, Washington trailed early but provided their ace run support as Cabrera hit his sixth home run of the year in the bottom of the second. They also capitalized on a fielder’s choice and a throwing error to take a 4-2 lead.

Meanwhile, Scherzer ran out of steam in the sixth inning as he surrendered a pair of two-run home runs, giving Atlanta the lead. He finished the game allowing six runs over 5 1/3 innings. He struck out 10 batters in the losing effort.

“I was able to do some good things today, but they did a good job of grinding against me,” said Scherzer. “In the end, I lost my location and paid for it.”

Opening the series in Tampa Bay against starter Ryan Yarbrough, Washington prepared to repeat their last encounter against the left-hander: scoring four runs in 2 2/3 innings.

However, the Rays pitcher had other plans as he made multiple adjustments in his pitches to keep the Nationals bats silent through the first five innings. Meanwhile, Anibal Sanchez limited the opposition to two runs through four frames. Tampa Bay found an opening in the fifth inning as four runs scored and Sanchez was removed after 4 1/3 innings of work.

“(Sanchez) is so focused on just getting outs at home plate that his times are just not good,” said Martinez.

Washington got on the board after Kurt Suzuki’s RBI groundout drove in a run, but the offense fell short once again as Washington lost their third straight game.

Sept. 16
Nationals defeat Rays, 4-2
Closing the short series in Tampa Bay, the Nationals took their chances with Voth on the mound for the second time in a week. The right-hander was still searching for his first victory of the season in his ninth start.

Such aspirations did not appear likely as Voth surrendered a run in the first inning while Washington was held scoreless through five innings. Cabrera finally broke the shutout driving a two-run home run to right field in the top of the sixth inning.

The Nationals’ middle relievers maintained the lead before handing the ball over to Hudson. One strike away from recording his 10th save of the year, he surrendered a game-tying home run to Brandon Lowe.

With the game in extra innings, Washington’s bats picked up their closer. With a runner on second to open the 10th inning, Luis Garcia led off the inning with a two-run home run. In a save situation, Martinez handed the ball over to McGowin, who struck out the side to earn his first career save.

“I always try to help the team any way I can, whether it is defensively or offensively, and today I was able to, fortunately enough, help the team get the victory,” said Garcia via a translator after the game.

Sept. 19 (Game One)
Nationals defeat Marlins, 5-0
In their first game of a doubleheader against the Miami Marlins, the Washington Nationals rode a strong pitching performance by Erick Fedde to earn a 5-0 road win.

Fedde, who last won on Aug. 14, struck out six Marlins and allowed one hit in his six-inning outing. He began with three scoreless innings and relied on his sinker (47 of his 91 pitches) to finish off Miami batters.

“The key for him is utilizing his fastball, pitching on both sides of the plate,” Martinez said. “He did that really well today. Really well. I’m proud of him.”

Washington added run support, starting at the top of the second inning as Garcia connected an RBI double, and Carter Kieboom followed up with a single to drive in another score. Andrew Stevenson fired a sharp single to right field, bringing home two runs in the fourth inning. Victor Robles followed up by adding another run for the Nationals with an RBI single.

Sept. 20 (Game Two)
Marlins defeat Nationals, 14-3
Washington had no answers to stop Miami Marlins third basemen Brian Anderson, who hit three home runs to lead the home team to a 14-3 win in the second game of a doubleheader.

The 27-year-old became the third Marlins player in team history to hit three homers in a game and the first to do in Marlins Park.

Washington initially jumped out to a two-run lead in the first inning after a Suzuki sacrifice fly and Josh Harrison’s RBI single. Corey Dickerson responded for Miami in the bottom of the inning with a solo home run, and Anderson followed in the second with his first homer.

After loading the bases and surrendering his third run on a walk during the third inning, starter Will Crowe came off for McGowin. Washington’s bullpen was decimated for the rest of the game as Miami finished with 12 hits and scored 12 runs in the final four innings.

Up Next:
With the end of the regular season approaching, Washington will remain busy to close with 13 games in the final 10 days. Following the Miami five-game series, the Nationals will travel home for a four-game against the Philadelphia Phillies, including a doubleheader on Tuesday.