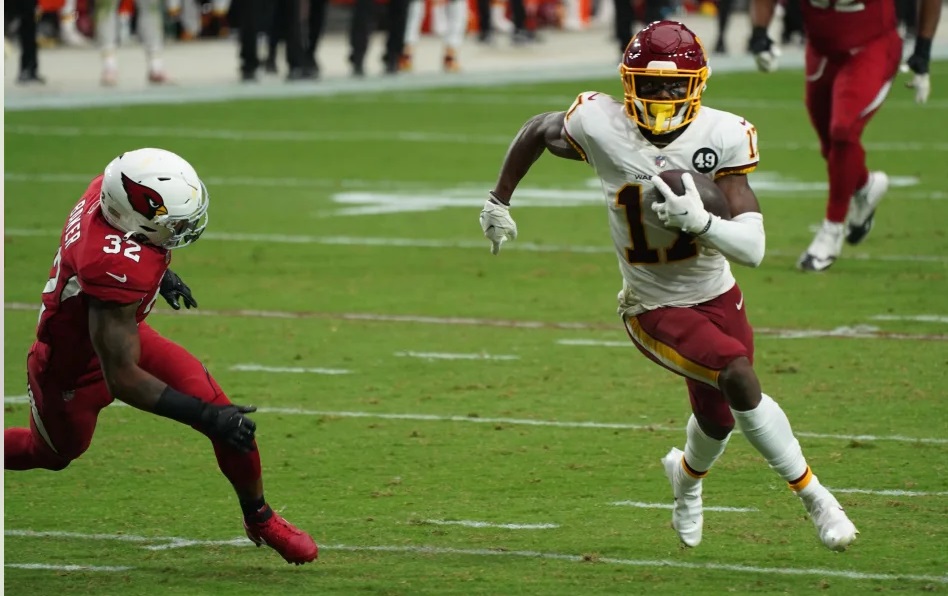 WASHINGTON — Last week, the Washington Football Team faced the Philadelphia Eagles and trailed 17-0, only to come back and win 27-17 behind a stellar defense and no-huddle offense.

This week, Washington visited the Arizona Cardinals hoping to remain undefeated but were no match for speedy quarterback Kyler Murray as the Cards won 30-15, despite a late comeback attempt.

“This is a great learning experience,” said Washington head coach Ron Rivera. “We played two teams today. We played them and ourselves. We hurt ourselves in that first half.”

Arizona’s first drive of the game summed up the day for this flashy offense, as it resulted in Murray hooking up with new target DeAndre Hopkins for a four-yard touchdown to go up 7-0 early in the game.

Not only did Murray look good passing, but he also couldn’t be stopped on the ground, as he tore up the Washington defense on a 14-yard touchdown run later in the first quarter extending the lead to 14-0.

The Burgundy and Gold offense struggled in the first half, with many drives resulting in quarterback Dwayne Haskins and company punting multiple times and turning the ball over on a fumble.

The Cardinals continued to look solid the rest of the half, as kicker Zane Gonzalez added a pair of field goals to extend the rout to 20-0 at half.

The shutout disappeared in the third quarter, as Washington drove from near midfield to inside the Arizona 10-yard-line, setting up Dustin Hopkins for a 24-yard field goal that cut the deficit to 17.

However, Murray continued to dominate the day for Arizona on a 21-yard scamper into the endzone to extend the rout to 27-3 early in the fourth quarter.

The second-year quarterback out of Oklahoma finished the day going 26-of-38 for 278 passing yards and one touchdown while rushing for 67 yards and two scores.

Meanwhile, Washington attempted a late comeback like they did the previous week, as Haskins connected with his primary receiver Terry McLaurin for a 24-yard touchdown. Still, a failed two-point conversion attempt kept the score at 27-9.

The ground game also showed up for Washington. Later in the fourth, rookie running back Antonio Gibson scored the first touchdown NFL touchdown of his career on an 11-yard run, with another failed two-point attempt to keep the score at 27-15.

With just more than six minutes remaining in the game, the Cardinals were able to run enough plays and kill a lot of time to add another field goal and prevent a late rally as Rivera didn’t even bother calling a timeout.

“At that point, I didn’t want to expose my players to injury,” said Rivera.

In the end, Haskins went 19-of-33 passing for 233 yards and one touchdown, while Gibson and J.D. McKissic led the rushing attack with 55 yards and one score, and 53 yards, respectively.

Once again, McLaurin proves to be a centerpiece for this Burgundy and Gold offense, as he hauled in seven catches for 126 yards and his first touchdown of the season.

That defense also got an interception early in the game, thanks to Collins, but they still allowed 160 rushing yards and 286 receiving yards from Arizona.

The Washington Football Team now falls to 1-1 but remains tied with the Dallas Cowboys for first place in the NFC East, as they will head to Cleveland to face the Browns next Sunday at 1:00 pm.