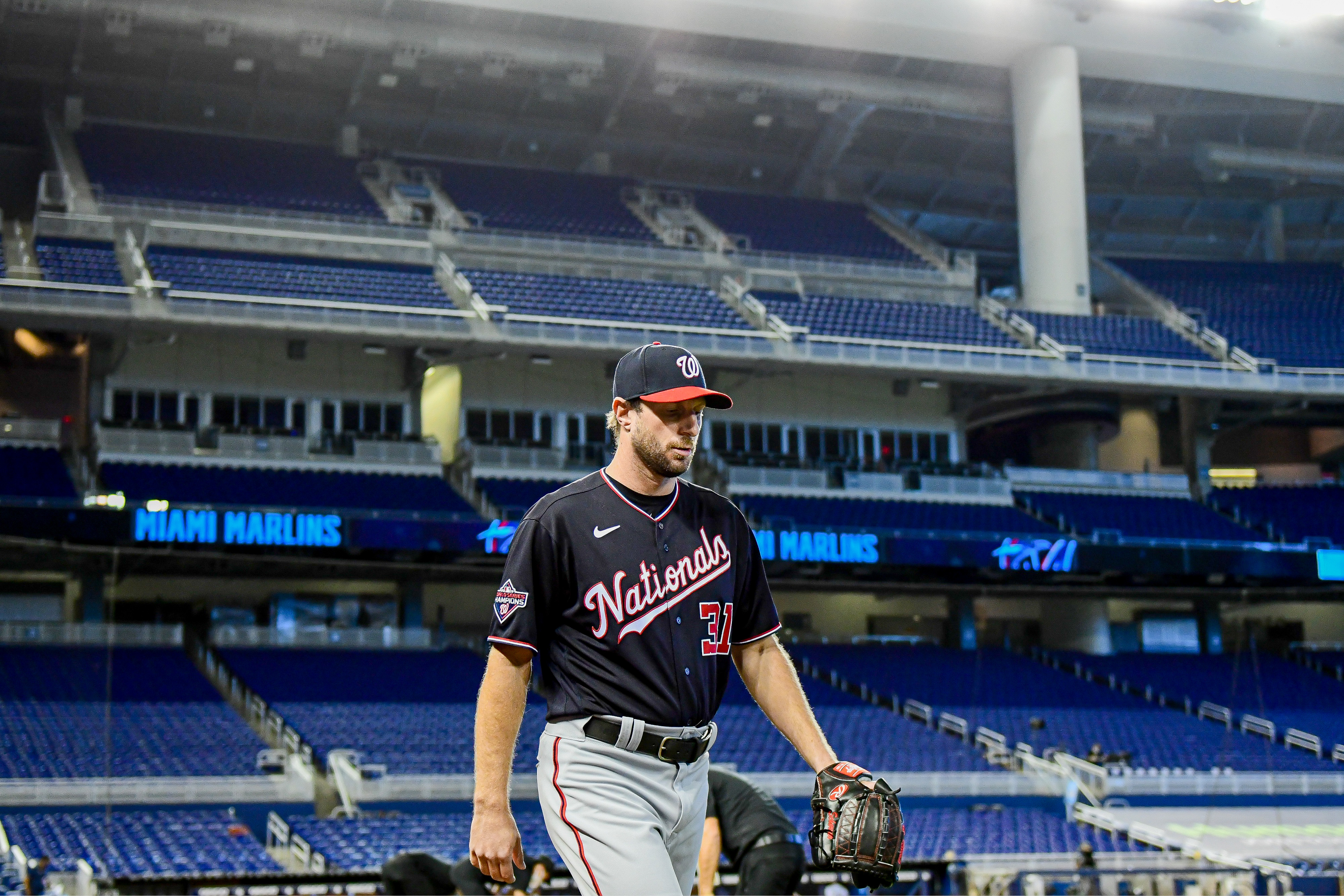 Before their elimination, Washington (23-34) entered the week looking to challenge their NL East opponents, Miami Marlins and Philadelphia Phillies, while trying to re-establish themselves after losing five of their last eight games.

Instead, in their five-game series in Miami, the Marlins won three straight games. Washington bounced back at home against the Phillies, winning three games before their matchup against the Mets.

Here is your week-in-review before this weekend’s action:

Originally a three-game series, Washington traveled to South Beach to play Miami in a five-game set following a July postponement due to a COVID-19 outbreak in the Marlins clubhouse, featuring two doubleheaders.

In Friday’s first game, Washington’s lineup matched up against rookie Sixto Sánchez, who had defeated Washington in his MLB debut in August. However, things were different this time as the visitors jumped early on the 22-year-old. Luis Garcia drove in an RBI double in the second inning and came around to score on a single by Carter Kieboom.

Washington added three more runs in the fourth inning on a two-run single by Andrew Stevenson and an RBI base hit by Victor Robles.

Pitcher Erick Fedde limited Miami to one hit over six shutout innings. His six strikeouts served as his highest total in a start since 2018. Yan Gomes praised the starter’s performance and role with Washington after the game.

“With Fedde, he’s just stepped up to whatever role he’s been asked to,” Gomes said. “He doesn’t have any ego where he thinks he should be a starter or be in the bullpen.”

Wil Crowe took the mound in the second game of the doubleheader for Washington, making his third career start. In his MLB debut against Miami in August, he allowed four runs (two earned) in 3 2/3 innings in a losing effort.

Despite RBIs by Kurt Suzuki and Josh Harrison to give Washington a 2-0 lead in the first inning, Miami responded with two solo home runs in consecutive innings. They forced Crowe out after a four-run inning and added eight more runs on Washington’s bullpen.

Washington Patrick Corbin entered Saturday’s contest a 4.10 ERA and planned to stay within that range for a third consecutive season.

The Marlins, though, had other plans.

Miami scored in all but one inning, resulting in seven earned runs allowed and 14 hits surrendered by Corbin in six innings. The 14 hits served as a career-high for the southpaw.

“(Corbin’s performance) was uncharacteristic,” said manager Dave Martinez. “He threw a lot of balls over the middle of the plate. His location wasn’t what it typically is and when you do that, you’re going to get his.”

On the offensive side, Stephenson drove in two runs on a single in the fourth inning and Trea Turner added a run on a sacrifice fly in the seventh.

With the loss, Washington’s 19-31 record matched their mark from championship season last year through their first 50 games.

Washington starting pitcher Max Scherzer fell into an early deficit after giving up an unearned run in the first inning. He kept Nationals in the game after setting down, throwing six strikeouts, allowing two runs, and surrendering five hits.

At the top of the fifth inning, Trea Turner hit an RBI single to left field to tie the game.  Defensive blunders cost Washington in the sixth inning as an Eric Thames error allowed Miami to score another run.

They had an opportunity to tie the game in the seventh inning as Garcia singled, and Yadiel Hernandez recorded his first career double. However, neither runner would come around to score, costing the Nationals their third straight loss in the series.

Closing out the five-game series against Miami, Washington brought out their bats.

Turner opened with a leadoff home run to start a three-run first inning. In the third, Suzuki homered, followed by a two-run shot by Michael A. Taylor. Asdrúbal Cabrera and Robles also went deep for Washington in a five-home run performance. Cabrera drove in four runs, a team high.

Pitcher Ben Braymer made his first career start for Washington, limiting Miami to one hit over five scoreless frames.

“I felt good leading up to first pitch and throughout my routine and warm-up,” said Braymer. “The guys did a good job of making me feel comfortable and making me feel supported, and it showed.”

Washington continued their late-season offensive surge in their return home against Philadelphia. Stevenson continued his five-game hitting streak with a leadoff double and came around to score on an RBI single by Cabrera.

The Nationals scored again after a first-inning error and an RBI groundout by Garcia in the sixth inning. A Brock Hold single in the bottom of the seventh drove in two more runs.

The offensive contributions were enough for Anibal Sanchez, who earned his third win of the year. He allowed one run on four hits in five innings of work. Four relievers kept Philadelphia’s bats quiet for the final four innings.

“(Sanchez’s) pitch count was high but he was able to keep us in the ballgame for five innings,” Martinez said. “If we didn’t get that from him, there’s no telling what we were going to do.”

Playing in their third doubleheader in a week, Washington looked to win three straight games for the first time since early August.

Cabrera singled to the right field at the bottom of the first, driving in a run to give Washington an early lead. They added four more runs in the third inning on RBI hits by Turner, Holt and Garcia to go ahead by five runs.

The support was more than enough for starter Austin Voth, who tossed his first career complete game, completing seven strikeouts to earn his first win of the year. Voth had not passed the fifth inning in his previous nine starts this season before Tuesday’s win.

“This is my first game where I have been able to complete a game, whether it was in high school or college or the minor leagues, so this was a big win for me,” said Voth.

Pitcher Paolo Espino made his first start since 2017 as Washington sought to win four consecutive games for the first time this year. He fell into a two-run deficit after surrendering a pair of RBI singles in the second inning.

Washington’s bats quickly answered back with four runs in the third inning as Stevenson drove in an RBI single, and Soto hit a three-run home run.

The Nationals added two more runs in the fourth. First, Yadiel Hernandez fired an RBI double to left field. Stevenson hit an RBI triple to give Washington a three-run advantage. Philadelphia rallied back to score three runs in two innings to send the game to extra innings.

Trailing 7-6 in the bottom of the eighth, Hernandez provided the heroics for Washington with a two-run walk-off home run. It was Hernandez’s first home run of his MLB career.

“In reality, it never crossed my mind that I would end the game that way,” Hernandez said via an interpreter. “I obviously thought I would hit a home run at some point because that is part of my game, but I didn’t foresee it happening at that moment.”

While Philadelphia was in desperation mode to stay in the race for a wildcard playoff spot, Washington aimed to win four straight games in the series. Meanwhile, the Nationals still held a slim mathematical chance to enter the postseason.

Despite their past success against Philadelphia, Washington’s bats did not come to life until late in the game. Meanwhile, the Phillies found their run support through the longball, finishing the game with five home runs.

Philadelphia put the game out of reach against Washington’s bullpen as they surrendered nine runs in the final two innings.

The three runs by Washington came courtesy of an RBI by Garcia in the fifth inning and a two-run home by Soto in the ninth inning.

In the first of a four-game series, the New York Mets fired off 12 hits while Dave Peterson provided seven solid innings of work to keep its playoff hopes alive as they defeated Washington 3-2 Thursday night.

The Nationals bats were silenced until the bottom of the fourth inning as Harrison’s line drive to left field drove in a run to give Washington a one-run lead. The visitors responded in the top of the fifth inning as Robinson Chirinos hit a two-run home run. Chirinos added an RBI single in the sixth, giving the Mets a 3-1 lead.

Hernandez connected with an RBI single late in the ninth inning, setting up for a wild finish, with playoff implications on the line. However, Garcia hit a grounder to second baseman Andres Gimenez for the final out of the game, officially ending any postseason hopes for Washington.

“I’ll remind them that other than not making the playoffs this year, we did win the World Series in 2019,” Martinez said. “That means a lot. That doesn’t go away. Let’s come back in 2021 and do it again.”

Washington will finish out the rest of their four-game series against the New York Mets this weekend to end their 2020 season. While out of playoff contention, Washington can play spoiler and end the Mets postseason hopes with a victory.