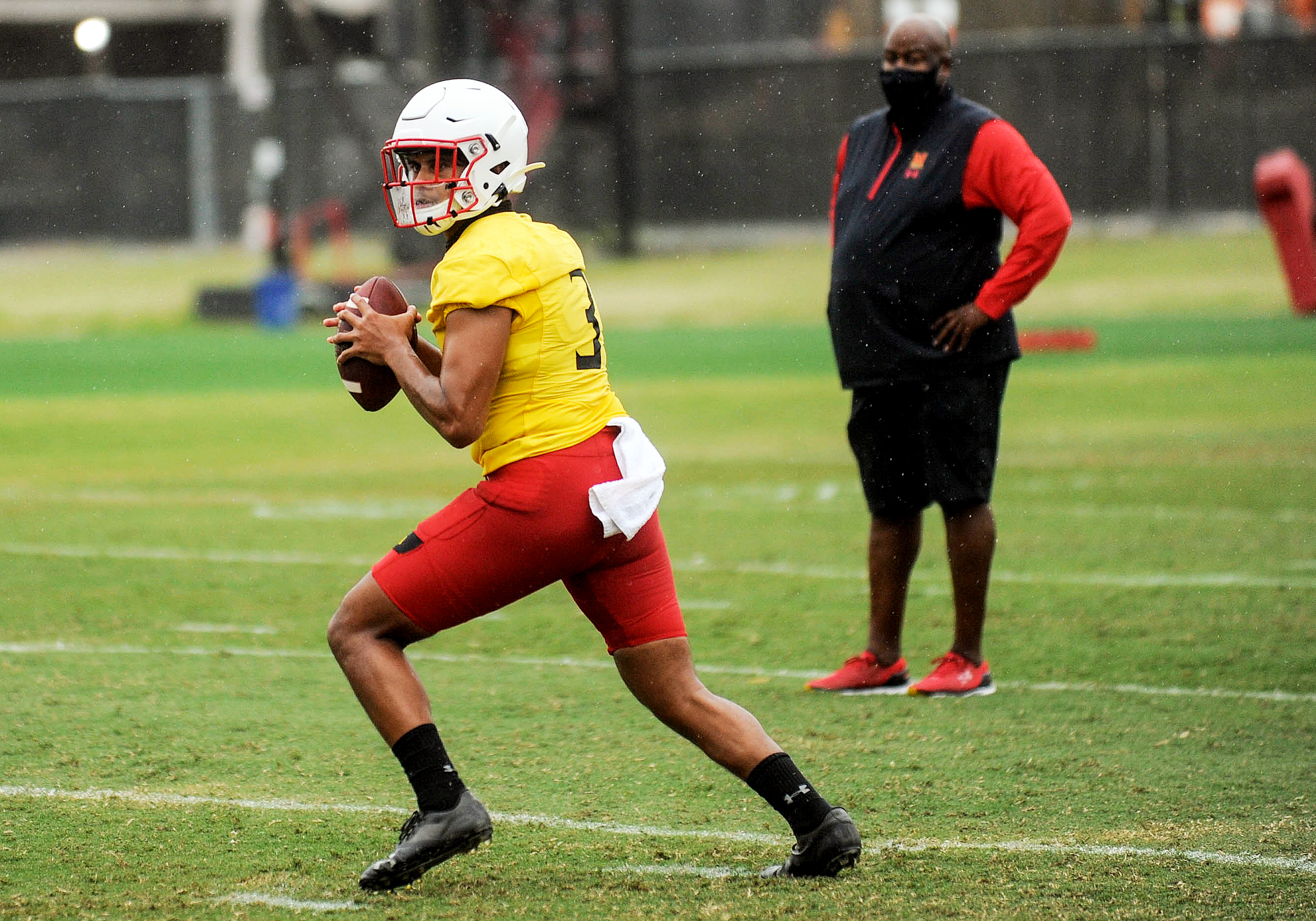 COLLEGE PARK – With the coronavirus pandemic disrupting every aspect of life, University of Maryland Head Football Coach Mike Locksley said he looks forward to one thing every day.

For 90 minutes to two hours, the second-year coach has an opportunity to join his players and coaching staff onto the practice field, going through drills and plays.

For Locksley, “being on the grass” helped give him a career. As his players prepare for the start of an unusual college football season, he hopes the sport’s return can bring some normalcy to his players and the Maryland community.

“To go through everything society has gone through since March, it’s a welcomed opportunity to go out and do something that we want to do and bring value and joy for us, our families, our supporters, our fans, and everyone who loves Maryland football,” Locksley said. “We are going to everything we can to do our part to get it to that point.”

Maryland football is back to training fulltime following the conference’s decision to reverse course and restart their college football season. The Terrapins will compete in an eight-game, all-conference schedule in eight weeks, starting on the road against Northwestern on Oct. 24.

“I think there is that appreciation of you do not appreciate something until it is gone,” Locksley said.

Since the Big Ten reversed course on playing football this fall, the Terrapins have worked with the school’s sports science department to create a schedule to help players ease back to a regular 20-hour football work week with a day off.

The new practice schedule has already worked wonders as veteran players have enough time to practice while younger players do not feel overloaded.

While there are 56 new faces on the team still adjusting and practicing with pads have yet to occur, wide receiver Brian Cobbs said the zoom meetings during quarantine helped clear up the smaller details to their schemes. Maryland will look to improve defensively after surrounding a conference-worse 37.4 points per game.

“It was a really good period to coach them up on the things they may not have learned while in a season, so getting them those mental reps have really paid off,” Cobbs said. “Now, coming out to practice, there is not many mental errors that coaches have to clean up; we are just out there ready to play and executing.”

Under new Big Ten protocols, all players, coaches and trainers will undergo daily antigen rapid testing, starting Sept. 30. Meanwhile, the university around them has experienced problems dealing with the coronavirus.

While students meet for in-person learning, one of its dorms partially shut down after 23 positive tests in a two-week period.

Before the Big Ten’s announcement, the athletic department shut down practices and workouts for all sports following 46 student-athletes of 10 different sports testing positive, forcing school officials to suspend all training activities. The cases were the most reported within Maryland Athletics since testing began over the summer.

Despite all the growing concerns and understanding the tendencies of being a college student, defensive back Tahj Capehart said he trusts the Big Ten protocols on daily testing. When asked about his teammates, he said that everyone has been “handling business the right way” and embraced the mandatory testing.

“We have a group of guys that want to play football,” Capehart said. “Everyone has temptations, but at this point and time, we are going to play this year, so we are all locked and loaded, ready to go.”

On the field, all the attention is focused on their offense, which averaged 25.3 points a game last season.

At quarterback, Locksley did not name who will become the starter. The leading candidates are transfer Taulia Tagovailoa and redshirt freshman Lance LeGendre. While both players received compliments for their work ethic, Locksley acknowledged that the complexities of this season might require both players to be ready to play at any time.

“In a COVID-type season, you are going to need your roster from 1-110 to all be prepared to go out and play,” Locksley said. “You never know what in-store for you tomorrow when you wake up on who is available and who is not. So, as a coaching staff, it is our job to prepare 1-110 to perform and execute the things we need to get executed.”