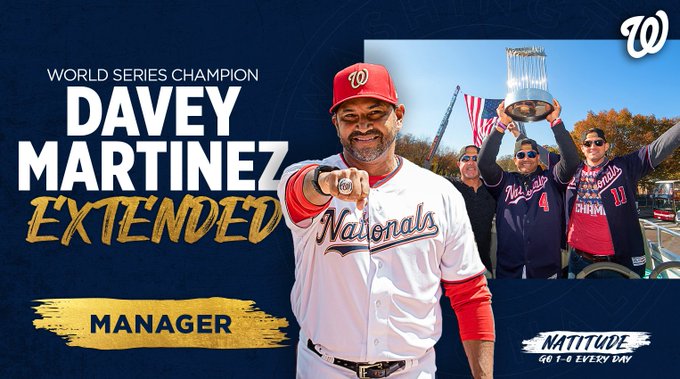 Coming off a championship run last season, the Washington Nationals 2020 campaign did not go as planned.

Concluding their regular season on Sunday, the Washington ballclub will finish the year at the bottom of the National League East Division standings for the first time since 2010, missing the postseason for the third time in the past seven years.

Still, the team’s front office is trusting the process. Today, the Nationals announced that they agreed to a three-year contract extension worth $7.5 million with Manager Davey Martinez through the 2023 season, in what is the manager’s 56th birthday.

“Davey’s determination and unwavering support of his players is admirable. We are so fortunate to have him leading our clubhouse each and every day,” said Washington Nationals Owner Mark Lerner in a statement.

Martinez joined the Nationals staff in 2018, earning his first managerial position at the Major League level.

Despite missing the playoffs in his first season as the Nationals manager and subsequently losing phenom Bryce Harper to free agency, Martinez rallied the ballclub in 2019 to a championship season.

The team, which sat in fourth place as late as June 16 of last year, finished their season with an eight-game winning streak and earned the chance to play in the Wild Card Game against the Milwaukee Brewers. Trailing 3-1 in the eighth inning, a come-from-behind win in that game salvaged their playoff hopes.

In the National League Division Series, the Nationals would recover from back-to-back elimination games against the Los Angeles Dodgers in the best-of-five series, which resulted in a game-winning grand slam by Howie Kendrick.

After sweeping the St. Louis Cardinals in the National League Championship Series, the Nationals came back after trailing the series 3-2 to defeat the Houston Astros and deliver the first pennant back to Washington since 1924.

The magic of last October didn’t carry over into the shortened 2020 MLB season. The Nationals lost Anthony Rendon to free agency in the offseason. They lost Stephen Strasburg to injury early in the year, but the team offered glimmers of hope throughout the season.

Juan Soto is still years away from approaching his prime age, but is among the league leaders in many of the primary offensive categories, including batting average, on-base percentage and slugging.

Trea Turner elevated his game to the next level, leading the league in hits and triples. Rookies Carter Keiboom and Luis Garcia increased their roles as the season progressed, looking to be future contributors for the team.

When healthy, the team features a premier starting rotation of Max Scherzer, Strasburg and Patrick Corbin.

The team extended General Manager Mike Rizzo a three-year deal in early September of this year, and under his vision, Martinez continues on in the Nationals’ future.

Assuming he remains with the team through his contract’s duration, Martinez will be the longest-tenured manager in franchise history since the team’s relocation to Washington in 2005.

“The players, coaches, and staff have the utmost respect for (Martinez) as a manager and a person. There is no one else our team would rather have at the helm,” said Rizzo.