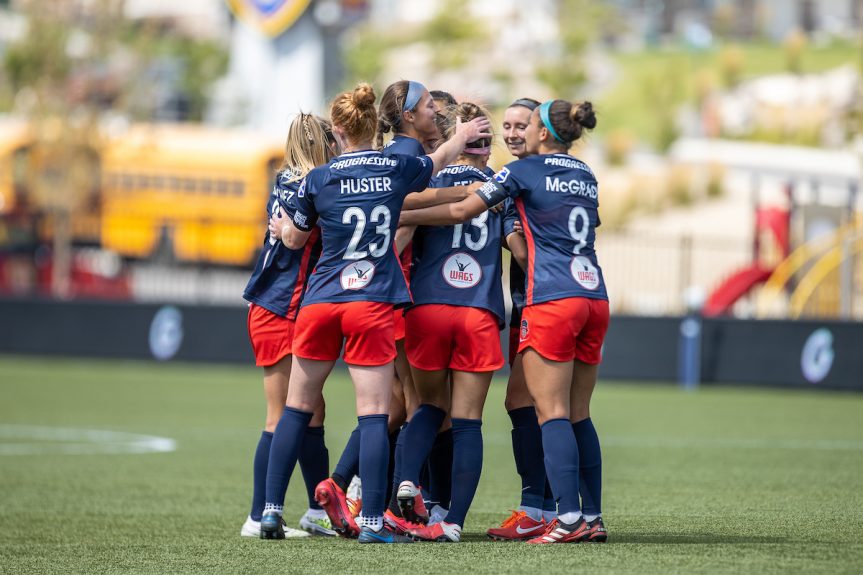 WASHINGTON – Striker Crystal Thomas scores a game-tying goal in the 88th minute to help the Washington Spirit earn a 1-1 draw against the Chicago Red Stars Saturday.

After intercepting a backward pass intended to a Chicago defense, Thomas faced a one-on-one opportunity against goalkeeper Alyssa Naeher. She fired a low shot to the right-hand corner of the goal net for the tying score.

Thomas, who has struggled with injuries and lack of playing time, said it was good to return to the field after a long layoff. After scoring three goals and proving an assist last season, she had made one appearance in all competitions this year before Saturday’s contest.

“I felt ready, I felt like I’m doing well, but that’s a big tribute to the staff and also my teammates for helping me get better,” Thomas said.

The Spirit was down in the 70th minute after a small build-up play resulted in a pass inside the penalty area by Sarah Luebbert to striker Savannah McCaskill for the one-timer goal. Despite the visitors outshooting Chicago (16-8), the Spirit needed to score its third goal in three matches after the 85th minute to earn the tie.

“I think it was the least that they deserved because they do have that character, they do have that way about them, and it’s a joy to see as a coach that you’ve got that type of players on your squad,” Washington head coach Richie Burke said.

With the result, the Spirit (1-1-1) moves into third place in the NWSL standings with four points. They travel to New Jersey to face Sky Blue FC on Oct. 3rd in their final regional pod game.

The positive result comes after Washington announced that it would play for D.C. Scores during the Verizon Community Shield competition as part of the Fall Series. All nine NWSL clubs will partner up with small businesses or programs in their community,

The team with the most points at the end of the Fall Series will receive a $25,000 grant for their community partner. The second-place team will receive $15,000, while the third-place team $10,000.

“As we fight this pandemic and confront the sad reality of systemic racism in our country, we want to use the Fall Series to play for a purpose,” NWSL Commissioner Lisa Baird said. “The Verizon Community Shield provides our players and clubs that opportunity and I want to thank Verizon for stepping up and helping us make this happen.”

DC Scores, a nonprofit that combines soccer, poetry, art, and community service, supports over 3,000 D.C.-area youth. The Spirit and DC Scores began their partnership in April 2020.

“We’re so grateful to the Spirit and very proud to be their official community partner,” DC Scores Chief Executive Officer Bethany Henderson said. “It’s so important for our young soccer players to feel connected to the broader soccer community and to have positive female role models. Thanks to the Spirit, they now have both.”

Should the Spirit come away with any of the three Verizon Community Shield prizes, team owner Steve Baldwin will match the donation and distribute it equally among the club’s other community partners, including the Youth Leadership Foundation, St. Jude Children’s Research Hospital and Children’s National Hospital, among others.