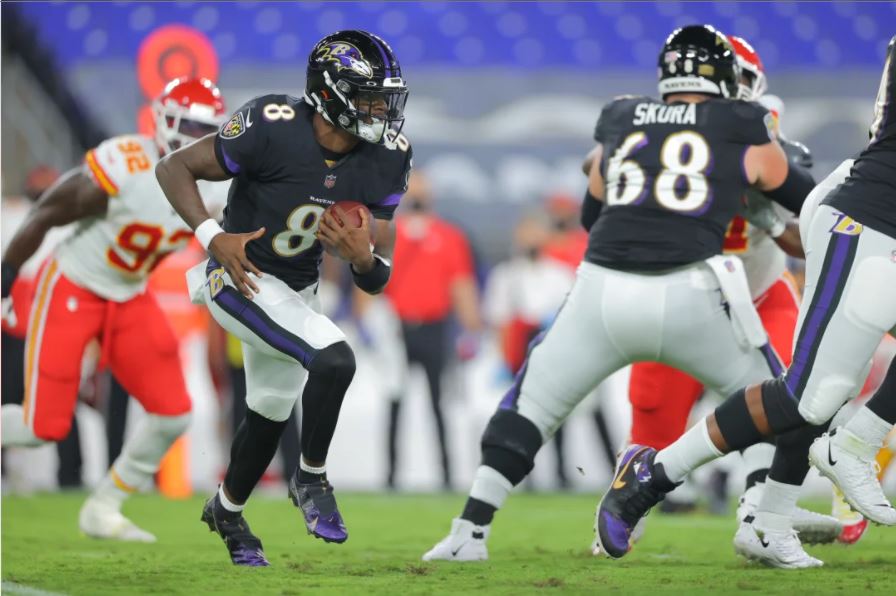 BALTIMORE – The NFL’s most valuable players from the past two seasons, Lamar Jackson and Patrick Mahomes, went head-to-head in Baltimore on Monday night in a battle of two undefeated teams.

The two young quarterbacks had faced off twice before, with Mahomes leading the Chiefs to victory in both games, which were decided by five points or less.

Just as successful as the quarterbacks have performed in recent years, their respective teams have dominated the AFC. The Chiefs are coming off a Super Bowl championship run, winning 11 straight games (including the playoffs) dating back to last season.

That streak nearly ended last week in Los Angeles, before the Chiefs rallied against the Chargers to win in overtime, 23-20.

Despite a premature exit for the Ravens last year, they have won their last 14 regular-season games. Their last regular-season loss came on Sept. 29, 2019, at home against the Cleveland Browns. However, the Chiefs had other plans and won convincingly 34-20.

Returning home to an empty M&T Bank Stadium, the Ravens received the kickoff to begin the game for the first time this season, and with the offense on the field, the team went to work immediately.

Primarily running the ball on their first drive, the Ravens reached the red zone in 11 plays before Justin Tucker connected with a 25-yard field goal.

That early 3-0 score would serve as the only lead for Baltimore as the Chiefs quickly answered, taking less than three minutes off the clock before Mahomes rushed for a three-yard touchdown.

The Chiefs defense shut down Jackson and company on three plays, giving the ball back to Mahomes, who took six minutes off the clock before shoveling a pass to Anthony Sherman for a 5-yard touchdown.

Before letting the game get out of hand, Devin Duvernay reignited the Ravens’ hopes, opening the second quarter with a 93-yard kick return for a touchdown, cutting the lead to 13-10.

That would serve as the final glimmer of positivity for the Ravens, who punted the ball away in their next two offensive possessions and followed that with a fumble by Jackson. Among those three drives, Baltimore maintained possession for just four minutes.

On the other side of the ball, the Chiefs took advantage of every hole in the Ravens defense, scoring touchdowns in back-to-back drives in the second quarter. Despite a missed field goal to close out the half, the Chiefs went into the locker room leading 27-10.

In the first half, Kansas City outgained Baltimore 333 yards to 97 yards through the air and won the advantage on the ground against their opponents by two yards.

Kansas City opened the second half with the ball, threatening to extend the lead. With two consecutive first downs followed by a pass completion, the Chiefs approached the red zone before Darwin Thompson fumbled the ball that the Ravens recovered.

For the 16th consecutive game, the Ravens defense forced a takeaway in what currently stands as the longest active streak in the league.

Capitalizing off the Chiefs turnover, the Ravens offense came with more energy in their opening drive of the second half. Running the ball down the field, the Ravens entered Chiefs territory. Jackson and tight end Mark Andrews nearly connected in the endzone, but the incomplete pass forced the team to settle for a field goal.

After forcing a Chiefs turnover on downs, the Ravens answered again on a six-play drive that resulted in a 5-yard touchdown pass to Nick Boyle to cut the Ravens deficit to 27-20 early in the fourth quarter.

Despite cutting the lead to a one-possession game, the Chiefs proved why they are defending champions. Mahomes threw his fourth touchdown pass of the game, finding Eric Fisher in the endzone for a 2-yard connection to cap off a 13-play drive.

The Ravens had the potential to answer back, capitalizing on a Chiefs defensive penalty and responded with a trio of first downs to enter the red zone. A pair of sacks pushed the Ravens back, who consequently turned the ball over on downs.

Trailing 34-20 with under five minutes left and the Baltimore defense on the field, the clock served as just much of an opponent to the Ravens’ success as the Chiefs offense.

The Chiefs offense maintained control over the clock, giving possession back to the Ravens with 23 seconds left in the game.

While the Ravens outrushed their opponents 158 yards to 132 yards, the passing game served as the difference. Mahomes’s 385 passing yards more than quintupled Jackson, who passed for just 97 yards.

That passing total marked a career-low for Jackson in an NFL start. Jackson’s 83 rushing yards led the team, while rookie running back J.K. Dobbins led the Ravens with 38 receiving yards.

“In the second half, we keep creeping up at the wrong times. We have to finish how we start,” said Jackson. “We have to play better.”

Falling into a deficit that expanded throughout the game, Jackson is now winless in five games in his career when trailing by at least 10 points at any point in the game. Jackson has also yet to win a game after trailing at halftime.

“(The Chiefs) offense was sharp, and Coach Reid had a great game plan. Their defense was physical and on point,” said John Harbaugh after the game. “We got beat in just about every way you can get beat, and we understand that we have a long way to go to get better.”

On one less day of rest, the Ravens will play their regional rival, the Washington Football Team, on Sunday at 1 p.m. ET at FedExField.

Washington is 1-2 after losing to the Cleveland Browns in Week 3.