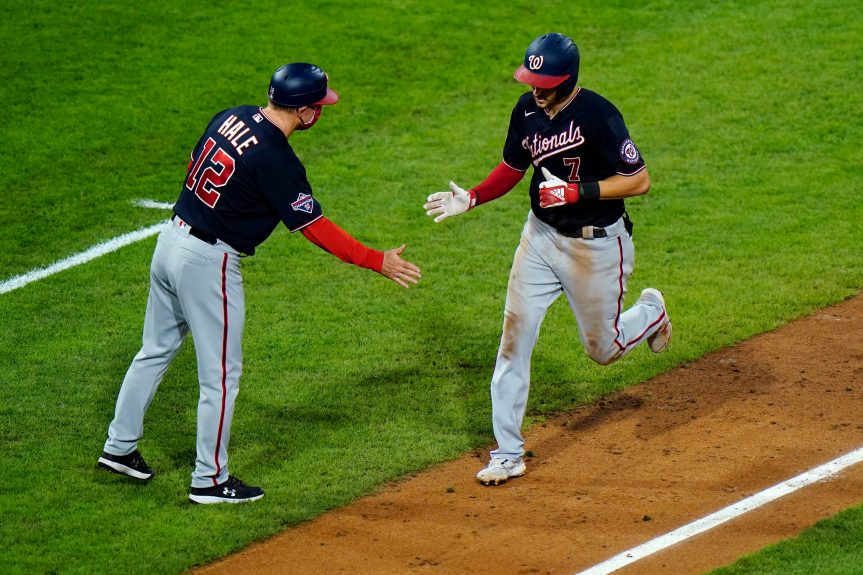 WASHINGTON – After losing their series opener against the New York Mets 3-2 Thursday, the Washington Nationals were officially eliminated from playoff contention.

With three games remaining and their opponents looking to clinch their spots into the postseason, Washington looked to spoil the party.

In their last three games of a shortened regular season, the Nationals dominated their division rivals and finished their 2020 campaign on a three-game winning streak.

The second game of the series, scheduled for Friday, was postponed due to inclement weather, resulting in a Saturday doubleheader.

A pair of multiple-time Cy Young Awards winners, Max Scherzer and Jacob DeGrom, faced off for their finals starts of 2020. Former Washington catcher Wilson Ramos took Scherzer deep with a two-run home run in the third inning before Andrew Stevenson answered with a solo shot against DeGrom in the bottom of the inning.

Scherzer would surrender a solo home run in the fourth inning before settling down for the rest of his outing.

Trailing 3-2 in the fifth inning, Stevenson hit a line drive to left field. New York left fielder Dominic Smith crashed into the wall and was unable to make the play. Stevenson took advantage and circle the bases for an inside-the-park home run to tie the game.

In the sixth inning, Josh Harrison drove in the go-ahead RBI single to give Washington the lead, as they won by a 4-3 score.

Scherzer picked up the victory, striking out seven and allowing three runs over six innings of work. He finished the season with a 5-4 record with a 3.74 ERA.

“(Scherzer) gave us exactly what we needed,” manager Dave Martinez said. “I’m glad he finished off strong; he feels good about himself going into the winter, and now, he gets to rest for a little bit.”

In the second game of the doubleheader, Trea Turner put Washington on the board first with a home run in the third inning. It was the start of an offensive spree that featured Yadiel Hernandez, Kurt Suzuki, Harrison and Michael A. Taylor, each driving in runs for the Nationals.

The third-inning surge run was enough for Anibal Sanchez, who limited the Mets to three runs over 5 1/3 innings. After struggling at the beginning of the year, Sanchez ended his year winning three of his final four starts. He finished with a 4-5 record and an ERA of 6.62.

To conclude the 2020 season, Austin Voth took the mound for Washington Sunday, looking to earn his second win of the season. However, he was not off to a good start after surrendering two runs in the first inning.

Trailing 3-1 in the second inning, Washington’s bats rallied for five runs with RBI hits by Stevenson and Turner. Washington’s offensive tear continued in the third inning, scoring six runs, including Turner hitting the Nationals’ first grand slam of the year and Yan Gomes adding on with a solo home run.

Washington added three more runs in the sixth inning, adding more support for Voth to close the season with a victory.

Turner led Washington with seven RBIs, and Juan Soto secured the batting crown recording a base hit and a walk. Soto finished the year leading the National League with a .351 batting average, .490 on-base percentage and .695 slugging percentage.

“You haven’t seen the best of Juan Soto yet, that’s for sure,” Martinez said. “He’s going to continue to get better in all aspects of the game. He’s not only a potential MVP this year, but for many years.”

Finishing the season tied for last place in the NL East with a 26-34 record, Washington fell short of their preseason expectations as defending champions. The last week of the season still served as a positive for Washington, as they won seven of their final nine games.

The duo threat of Soto and Turner stood among the league leaders in several of the offensive categories. Soto led Washington with 13 home runs while Turner had a team-high 41 RBIs.

Prospect Luis Garcia made history becoming the first player born in the 2000s to hit a home run at the Major League level in his rookie campaign. Stevenson played his best month of baseball in September, recording a hit in his final 12 games, where he batted .417 with 12 runs driven in.

With a young core of talent and the return of both General Manager Mike Rizzo and Martinez to three-year contracts, Washington’s future with a return to the World Series looks bright.