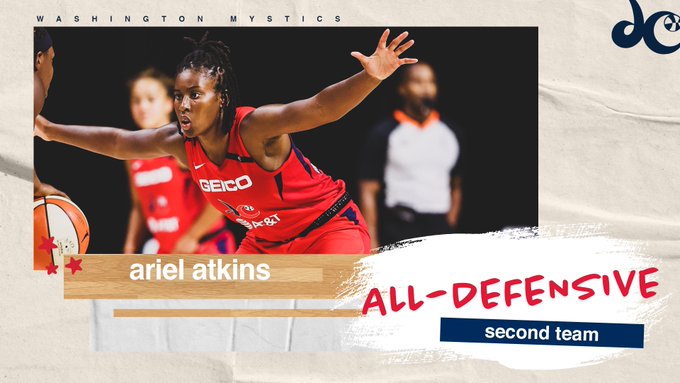 WASHINGTON – Though the Washington Mystics were eliminated in the first round of the WNBA Playoffs by the Phoenix Mercury, dashing their hope of successfully defending their 2019 WNBA title, they recently received good news.

Since joining Washinton as a first-round pick from the University of Texas, Atkins has established herself as one of the best Three-and-D players in the league after averaging a career-high 1.77 steals per game and shot 41.1% from distance.

Atkins ranked No. 3 in the league in steals, registered a season-high five steals against the New York Liberty while notching four against the Mercury and Los Angeles Sparks. Atkins averages 1.5 steals for her career.

Atkins had to embrace a new role with the absences of 2019 MVP forward Elena Delle Donne, guard Natasha Cloud and forward Tina Charles, who all opted out of playing in the WNBA bubble.

Atkins flourished with a heavier workload. She achieved career year marks with 14.8 points, 2.9 rebounds, and 2.4 assists per game.

Clark is the only player who was selected unanimously and is doing so for the second-straight season. Clark received the maximum number of first-team votes from the coaches, 11.

The WNBA’s 12 head coaches select the WNBA All-Defensive First and Second Team by position and aren’t allowed to vote for players from their own teams. Players receive five points for the first team votes and three points for each second-team vote.