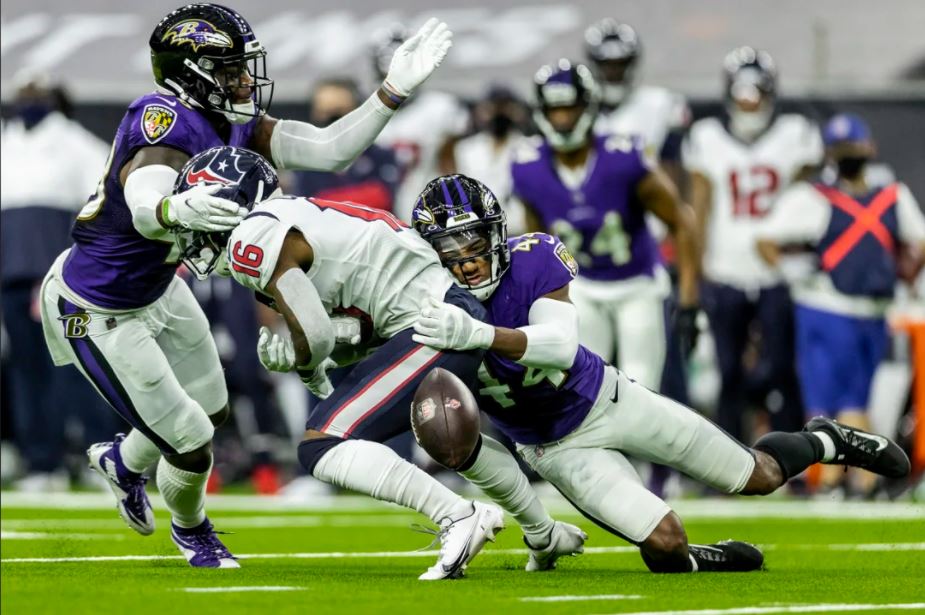 BALTIMORE – The Baltimore Ravens now have the second-highest-paid cornerback in the NFL. On Thursday, the Ravens and cornerback Marlon Humphrey agreed to a five-year extension worth $98.75 million.

“It’s great to sign that deal and know that for the next couple of years, I’m going to be a Raven,” said Humphrey. “Since I’ve been here, I have enjoyed the organization, this city and these fans.”

Expected to make an estimated $19.75 million per year, Humphrey will trail only Los Angeles Rams cornerback Jalen Ramsey ($20 million per year) in salary at the position.

Under contract through 2026, the 24-year-old cornerback will receive a guaranteed $40 million, in what is considered the largest deal for a Ravens defensive player.

In his press conference on Thursday, Humphrey praised his family for providing a stable household for him.

“Growing up in my house, anytime I needed someone to lean on, I had an older brother, an older sister, a mom and a dad that have always kept me align.”

He became especially emotional, sharing the support of his father.

“Since I was young, I told my dad I wanted to play in the NFL, and he never really let me slip,” said Humphrey. “My dad has been so much more than just a father; he coached me as a kid. He’s been everything for me, along with my mom.”

His father, Bobby Humphrey, played four NFL seasons as a running back, which included a Pro Bowl selection with the Denver Broncos in 1990.

For Humphrey, his career at the professional level began in 2017 after being drafted by the Ravens with their 16th overall pick (University of Alabama).

He was the second cornerback taken in that draft after New Orleans Saints selection Marshon Lattimore (11th overall) out of Ohio State University.

The Ravens’ selection of Humphrey has proven successful for both parties, as the cornerback is in the midst of his fourth season.

Since Humphrey’s entrance to the league, he has allowed the third-lowest completion percentage (49.8%) among defensive backs, trailing only Cincinnati Bengals’ William Jackson (49.5%) and Kansas City Chiefs’ Bashaud Breeland (49.7%), according to NFL Next Gen Stats.

Humphrey’s breakout season came in 2019 when he was selected to his first Pro Bowl. He led the league with two fumble recoveries resulting in a touchdown. He also tied the team lead with three interceptions during the season.

To open the 2020 season, Humphrey recorded the Raven’s first interception of the year in the team’s season opener against the Cleveland Browns. He followed that performance with six solo tackles against the Houston Texans.

“I can’t express how important extending him is because of the type of person he is and what he does for us,” said his Defensive Coordinator Don “Wink” Martindale. “He’s one of those guys that you want to see rewarded.”

General Manager Eric DeCosta added, “Besides his obvious talents as a playmaking corner, he’s a passionate competitor who craves winning. Marlon has been a stalwart in our community, and we are excited that he’s going to remain with us for seven seasons.”