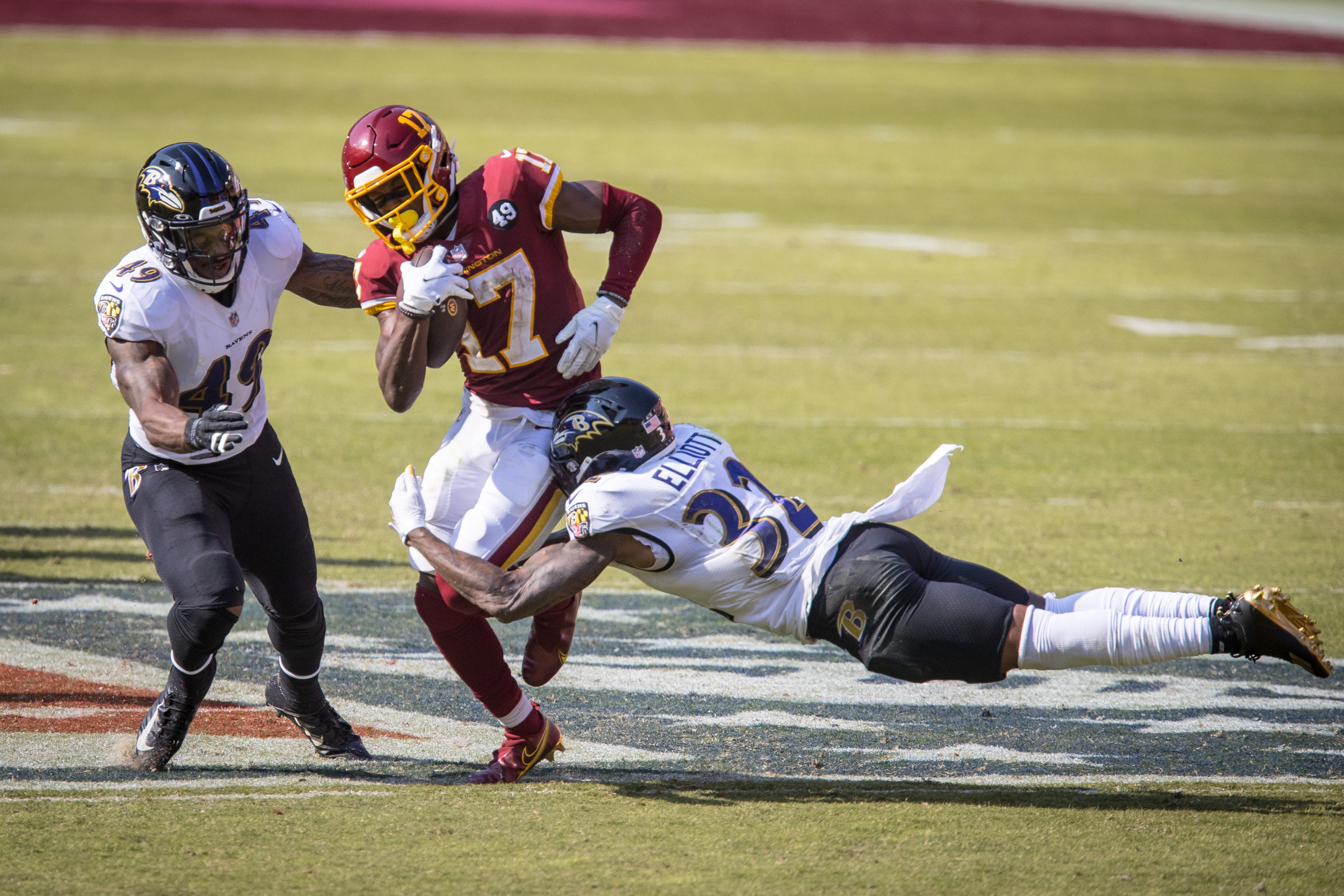 LANDOVER – The Washington Football Team did everything possible to contend with the Baltimore Ravens and last year’s league MVP Lamar Jackson. However, it was not enough for the underdogs as Baltimore left FedEx Field Sunday with a 31-37 victory.

After the game’s first two drives, Washington was in their territory on the 29-yard line when Baltimore cornerback Marlon Humphrey knocked the ball out of J.D. McKissic’s hands. Baltimore’s Marcus Peters to recover the fumble to regain possession.

The takeaway led to Jackson firing a deep 33-yard pass to wide receiver Marquise Brown to the one-yard-line. On the next play, running back Mark Ingram scored off a 1-yard run to give Baltimore a 7-0 lead in the first.

After a missed field goal by Washington, the Ravens capitalized again as Jackson used his speed on a 50-yard dash for a rushing touchdown run to extend the lead to 14-0 with 9:56 left in the first half.

On Washington’s ensuing drive, rookie running back Antonio Gibson pounded the ball up the field with a series of runs, including a 40-yard scamper into Baltimore territory, and a 2-yard rushing score to cut the deficit to 14-7 late into the second quarter.

However, Washington was caught off guard by Baltimore’s playmaking abilities on the ensuing drive as punter Sam Koch fired a pass to Miles Boykin on a fake punt for the first down. The new set of downs resulted in Jackson connecting with tight end Mark Andrews for a 25-yard touchdown catch for Baltimore.

Jackson threw an interception late in the second quarter to Washington cornerback Kendall Fuller, setting up kicker Dustin Hopkins for a 43-yard field goal to cut the deficit to 21-10 at halftime. Quarterback Dwayne Haskins put Washington in field-goal range after a 12-yard pass to McKissic with 30 seconds remaining.

Sunday afternoon marked the first time Haskins passed for over 300 yards, finishing the game 314 yards on 32 of 45 passing and one rushing touchdown.

While Haskins had good moments throughout the game, Rivera said he is “still developing” and will look for opportunities to help him get better.

“We didn’t have opportunities this offseason to work through situations and scenarios,” Rivera said of Haskins’ future potential. “It’s just kind of learn as you grow.”

Baltimore opened the second half with a 10-play, 75-yard drive, ending with Jackson hooking up with Andrews for the second time on a 22-yard touchdown pass to extend their lead by 18 points.

“Our offensive line did a great job of blocking,” Jackson said. “I had to get out of the pocket a little, and Mark [Andrews] did a great job of running with me. And I just gave him a playable ball, and he made a great catch – touchdown.”

Up 31-10 late in the game, the Ravens substituted in former Washington quarterback Robert Griffin III for Jackson. However, in just his third play against his former team, Fuller intercepted Griffin, giving the home team a chance to rally back into the game.

On the ensuing possession, Haskins connected with wide receiver Terry McLaurin for a 39-yard gain, which set up a one-yard quarterback sneak for a touchdown. Washington attempted to recover an onside kick attempt, but Baltimore collected the loose ball to seal their win.

Gibson was solid on the ground and through the air, with 46 rushing yards and 82 receiving yards, while McLaurin once again stepped up with 10 catches for 118 yards. Despite the loss, Washington remains in first place in the NFC East and will look to rebound at home against the Los Angeles Rams next Sunday.

Head Coach John Harbaugh said Washington reveled some of Baltimore’s weaknesses they must work on before hosting the Cincinnati Bengals next week.

“Washington played well, very well,” Harbaugh said. “[They] forced two turnovers on us and did some good things with their offensive game plan. I thought it was effective at times, but our guys played hard. We ran the ball well, made some huge, very important conversions in the pass game … We didn’t have gigantic plays, but we certainly had conversion plays.”