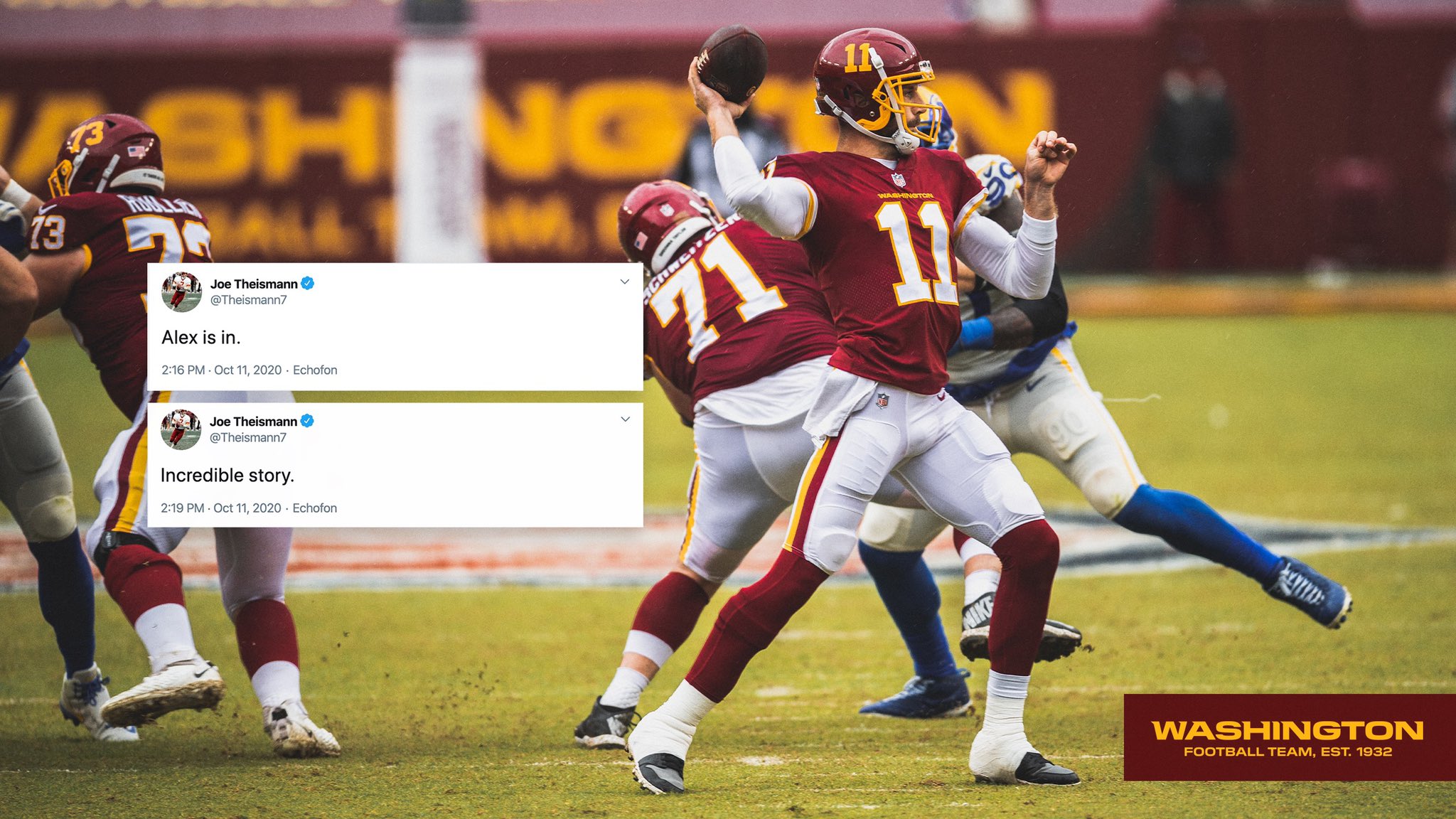 LANDOVER — On Sunday afternoon, Washington Football Team quarterback Alex Smith made his return to the football field for the first time since suffering a devastating leg injury back in November 2018, after starting quarterback Kyle Allen got knocked out with a concussion.

However, Washington’s opponent, the Los Angeles Rams, proved to be too much for the one-win team as they escaped FedExField with the 30-10 victory.

“It was very surreal at first,” said Smith. “I knew that once Kyle took that shot, there was a chance, and obviously, I ran over and grabbed my helmet and was ready to roll.”

After struggling early on in the season, second-year quarterback Dwayne Haskins was demoted to third-string by head coach Ron Rivera, giving Allen the starting job against the Rams on Sunday.

Allen’s first drive was a three-and-out, which led to the Rams offense driving 76 yards down the field, leading to running back Darrell Henderson scoring from three yards out, but the missed extra point kept the score at 6-0.

On Washington’s ensuing drive, Allen made some wise decisions and showed off his mobility, especially when he scampered into the end zone for a 7-yard touchdown, with the extra point giving the Burgundy and Gold the 7-6 lead.

But that lead didn’t last long, because Los Angeles’s ensuing drive resulted in another score, as quarterback Jared Goff fired a deep pass to wide receiver Robert Woods for the 56-yard touchdown, giving the visitors the 13-7 lead at the beginning of the second quarter.

The Rams followed it up with a nine-play, 83-yard drive, ending with Goff taking it in from two yards out off a play fake, giving the Rams a commanding 20-7 lead.

Late in the half, when scrambling for the first down, Allen got knocked out of bounds on a helmet-to-helmet hit by Rams cornerback Jalen Ramsey, resulting in a concussion.

With Allen getting taken out of the game, Smith saw his first NFL action since breaking his leg nearly two years ago, as he was able to lead his team down the field and set up Dustin Hopkins for a 48-yard field goal that cut the deficit to 20-10 at halftime.

“I decided I didn’t want him to take another big shot,” Rivera stated on Allen leaving late in the first half. “As long as he’s OK and he’s ready to go, he’ll be our starter.”

However, in the second half, Smith looked took a lot of contact from defenders, as he got tackled and sacked numerous times, while amazingly staying healthy the whole time.

Though it didn’t really help that the offensive line struggled to protect Allen and Smith, as they got sacked twice and six times, respectively, by the Rams defense.

This is all thanks to Los Angeles All-Pro defensive tackle Aaron Donald, one of the league’s best pass rushers, doing his part and sacking the QB four times, while linebacker Troy Reeder racked up three sacks.

The final Rams touchdown came in the middle of the fourth quarter when Henderson scored for the second time on an 11-yard pass from Goff.

Allen had a solid start before getting injured, completing 9-of-13 attempts for 74 passing yards and one rushing TD, while Smith finished the day 9-of-17 for 37 yards.

As the Washington Football Team’s record falls to 1-4, they will head to East Rutherford to face the 0-5 New York Giants next Sunday at 1:00 pm.