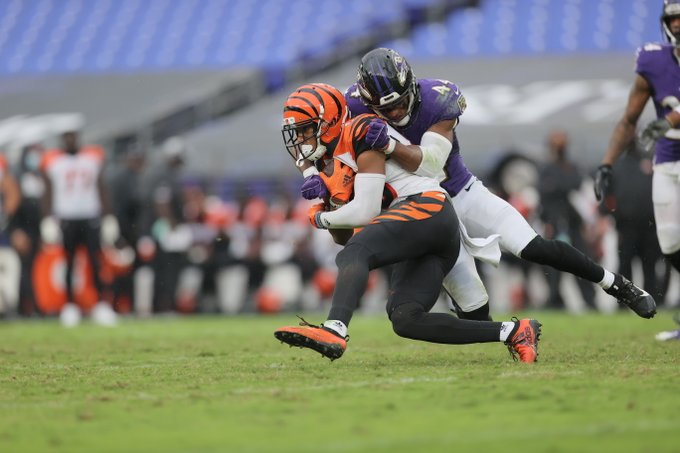 BALTIMORE – The Baltimore Ravens got their first look at rookie quarterback Joe Burrow, as they humbled the former LSU standout and No. 1 pick by shutting out the Cincinnati Bengals until the final seconds of the game on Oct. 11.

Taking the field first, the Ravens defense limited the Bengals to just four plays before forcing a punt on Cincinnati’s first possession.

The Ravens offense drew first blood quickly and took the ball into Cincinnati territory on a 42-yard gain by Devin Duvernay, before setting Justin Tucker up for a 46-yard field goal.

Back on the field, the Ravens defense again limited Burrow’s offense forcing a turnover on downs. The Bengals were in field goal range on the 37-yard line in Baltimore territory before taking a chance on fourth down.

Lamar Jackson and company took advantage of the turnover with a 15-play drive, which resulted in a five-yard touchdown connection from Jackson to tight end Mark Andrews to take a 10-0 lead.

Taking less than a minute off the clock, the Ravens extended the lead to 17-0. Marcus Peters intercepted a pass at the Cincinnati 43-yard line just 20 seconds into the Bengals offensive possession. Forcing the turnover, the Ravens also continued with the longest active streak of 18 consecutive games with a takeaway.

Placed in beneficial field positioning, the Ravens offense scored again in just 24 seconds as Jackson found Marquise Brown for a 2-yard pass in the end zone in early in the second quarter.

On the subsequent possession, dominance from the Ravens defense continued as rookie linebacker Patrick Queen forced Burrow to fumble.

Queen, who was a college teammate of Burrow at LSU and a fellow 2020 first-round draft pick, said after the game: “I knew that when I got drafted and when Joe got drafted, we would be seeing each other twice a year, so it’s the start of a great rivalry.”

In the four offensive possessions for both teams for the remainder of the quarter, neither team effectively moved the ball. With a chance to score in the final seconds of the half, Tucker missed a 61-yard attempt.

With the Ravens leading 17-0 to open the second half, defense dominated the third quarter.

Each of the teams’ first two possessions resulted in four and out situations before the Ravens closed out the quarter with Tucker’s 39-yard field goal.

Keeping the Bengals scoreless heading into the final quarter, the Ravens extended a streak of holding opponents scoreless in the third quarter in each of their five games this season.

In the fourth quarter, Marlon Humphrey and Queen’s combination continued the defensive showdown, forcing another Bengals fumble. Humphrey forced the fumble, and Queen recovered it and ran for over 50 yards into the endzone for a touchdown.

Both Queen and Jackson noted after the game that Humprey has been the most valuable defensive player for the Ravens.

Trailing 27-0, the Bengals finally overcame the Ravens defense, maintaining possession for nearly eight minutes before connecting on a 38-yard field goal in the final 30 seconds of the game to avoid a scoreless affair.

The Ravens defense limited Burrow to 183 passing yards without a touchdown. Jackson only passed for 180 yards but completed two touchdown passes.

Brown and Andrews each caught six passes, receiving for 77 yards and 56 yards, respectively. Mark Ingram led the Ravens rushing attack with 57 yards on the ground.

On the defensive side, Queen led the defense with six tackles. Seven separate players on the defense, including Queen, recorded a sack.

“A very good team win. The defense played lights out throughout the whole game, and that was fun to watch,” said Baltimore Ravens Head Coach John Harbaugh. “All three phases did all they had to do to win.”

Despite the blowout win, Andrews acknowledged that the team has room for improvement.

“There are times when our offense isn’t clicking, and we need to get better,” said Andrews.

Still, the effort proved enough for Baltimore in their 27-3 victory over Cincinnati.

With a 4-1 record this season, the Ravens will travel to Philadelphia on Sunday to take on the Eagles at 1 p.m. ET. The Eagles will enter Week 6 with a 1-3-1 record after losing to the Pittsburgh Steelers in their most recent game, 38-29.