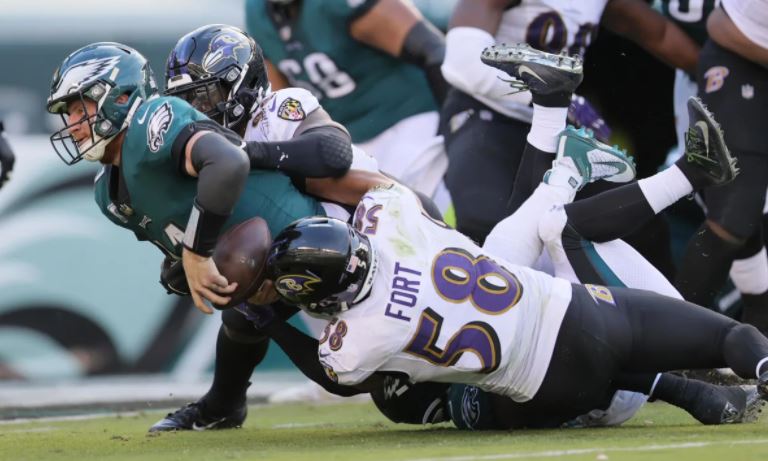 Playing in front of 7,500 fans at Lincoln Financial Field, Baltimore arrived undefeated on the road (2-0) and a 4-1 record overall.

After shutting down opposing quarterback Carson Wentz and the rest of the Philadelphia offense in the early minutes of the game, Baltimore marched down the field on their first offensive possession. Quarterback Lamar Jackson completed three consecutive passes during the drive included finding Nick Boyle for a 7-yard touchdown pass.

“If it wasn’t for (Boyle) getting open, I would have had to throw the ball away,” Jackson said.

Both teams traded possession in the subsequent drives until the end of the quarter when DeShon Elliott forced Carson Wentz to fumble to put the Baltimore offense back in Philadelphia territory.

Taking advantage of the field positioning, Baltimore finished a quick five-play drive with a 7-yard touchdown run by Gus Edwards to take a 14-0 lead.

After forcing a Philadelphia punt for the fourth time of the game, Baltimore’s one-sided offensive affair continued. Opening the second quarter, Jackson found Willie Snead for a 32-yard pass to put Baltimore in field goal territory. Kicker Justin Tucker connected a 46-yard field goal to put the Ravens up by 17 points with 12 minutes remaining before halftime.

Baltimore’s defense held Philadelphia scoreless through the first half. The Eagles (1-4-1) nearly scored in the final moments of the half, but kicker Jake Elliot missed a 52-yard field goal.

With a comfortable lead to open the third quarter, Baltimore ran nearly seven minutes off the clock in the opening drive but forced to punt.

Philadelphia quickly responded with a two-play drive, ending with running back Miles Sanders rushing for 74 yards before fumbling the ball before reaching the end zone.

Teammate J.J. Arcega-Whiteside recovered the loose ball and scored to put the Eagles on the board. A failed two-point conversion attempt kept the score at 17-6. It was the first time all season that the Ravens defense surrendered points in the third quarter.

Baltimore went back to work on their ensuing drive as Jackson found Marquise Brown for a 20-yard pass to enter Philadelphia territory. The third-year quarter then ran untouched for a 37-yard touchdown to extend the Baltimore lead to 24-6.

Philadelphia did not surrender. Instead, the Eagles began its improbable comeback effort in the fourth quarter.

Trailing by 18 points, the Eagles jumped back into the game after Wentz found Jason Croom for a 3-yard touchdown and then found Greg Ward Jr. for a 2-point conversion.

A pair of Tucker field goals helped Baltimore extend its lead to 30-14. But Philadelphia would not quit in the final seven minutes of game action, scoring in consecutive drives.

First, Wentz cut the lead to eight points after ending an 11-play drive with a touchdown pass to Travis Fulgham and a converted 2-point conversion with a pass completion to Arcega-Whiteside.

It did not take long for Philadelphia to score again as Wentz dove forward for a one-yard rushing touchdown. With a chance to tie the game, Wentz failed to convert a third 2-point conversion.

“First of all, it was just a really good football game, in terms of being exciting,” Baltimore head coach John Harbaugh said. “I’ll credit the Eagles. It was just a hard fight. It was a tough, hard, football fight.”

Despite being outscored 22-6 in the final quarter, the accumulation of points in the first three periods proved just enough for Baltimore to improve to 5-1.

“These are the kind of games that build character,” defensive end Calais Campbell said. “This is a championship character that’s built-in moments like this. This team, they have winners.”

However, not everyone in the Ravens’ locker room agrees. Elliot said his Baltimore players “expect greatness” and did not live up to those standards against Philadelphia.

After a bye week, Baltimore returns home to take on their division rivals the Pittsburgh Steelers on Nov. 1. Currently leading the division, Pittsburg is undefeated, winning their first five games, including a 38-7 win over the Cleveland Browns.

As a first-year Raven, Campbell said the upcoming matchup would be enough motivation to improve their performance.

“You’re not really a Raven until you play against the Steelers,” Campbell said. “So, I’m ready.”