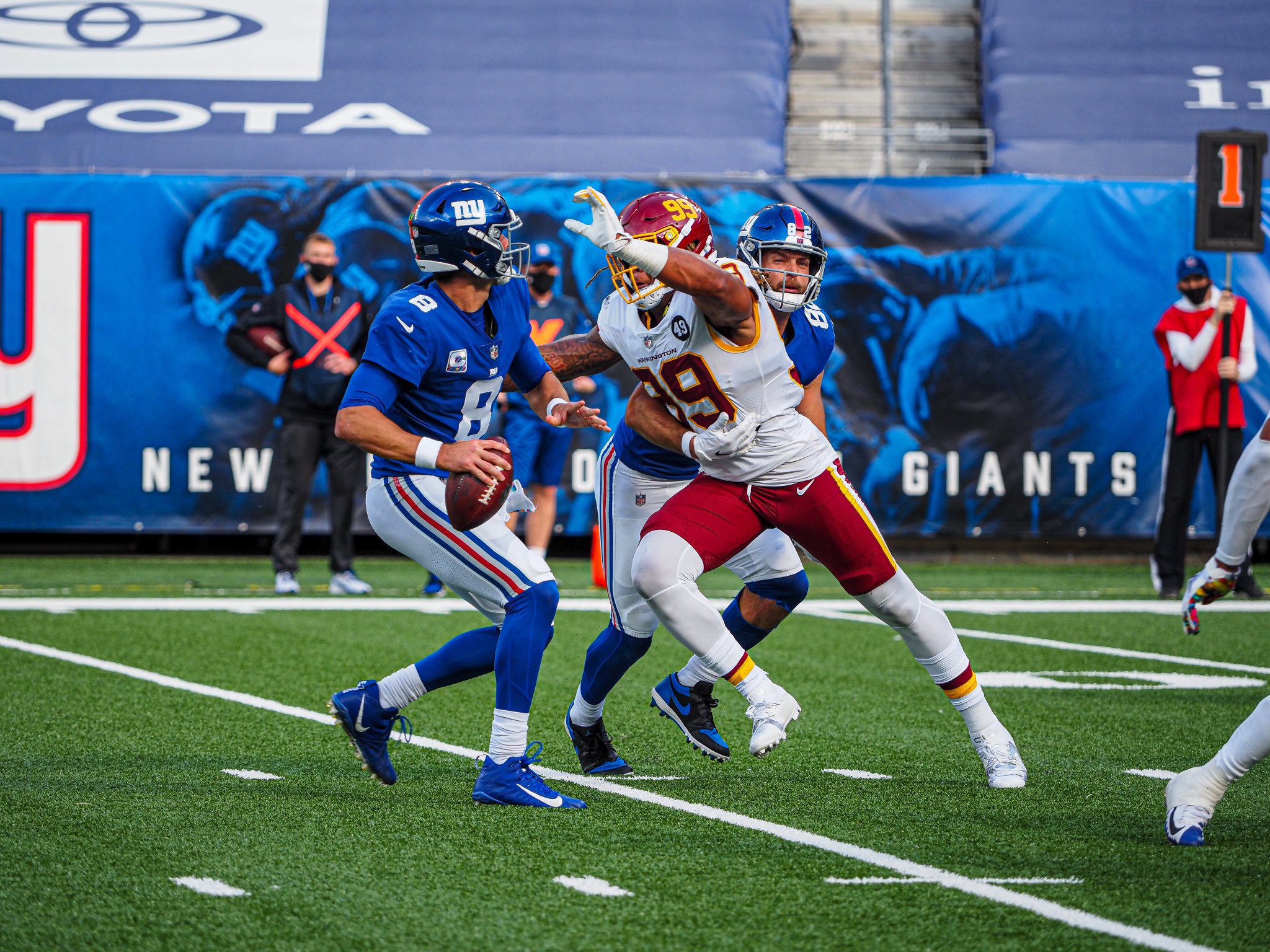 However, after the Giants took the lead on a scoop-and-score late in the fourth quarter, Washington Football Team quarterback Kyle Allen led Washington back on a late touchdown, only for the two-point conversion to fail as New York won 20-19.

“The only way to learn to win is to play to win,” said Washington Football Team Head Coach Ron Rivera. “That’s what I want those guys to understand. That’s the mentality.”

Late in the first and early in the second quarter, Allen led the Burgundy and Gold on an 11-play, 70-yard drive, which resulted in Hopkins nailing a 35-yard kick to cut the deficit to 10-3.

On New York’s ensuing possession, Jones faked out the Washington defense on an option play where he ran 49 yards from his own 25-yard-line to the Washington 26.

The Giants offense gained 24 more yards to set up Gano for a 20-yard chip shot to extend the lead to 13-3.

With less than 20 seconds left in the half, Allen fired a fade pass to tight end Logan Thomas, who made a miraculous catch in the corner of the end zone, while being heavily covered by New York cornerback Julian Love, for the 5-yard touchdown to cut the deficit to 13-10 at halftime.

During the third quarter, the score stayed the same as Jones attempted to lead the Giants down the field and extend the lead.

However, on first and goal from the Washington seven-yard line, Jones was under pressure and launched a pass towards the back of the end zone that was intercepted by Washington Football Team cornerback Kendall Fuller.

That turnover led to a 14-play, 70-yard drive from the visitors, resulting in a 28-yard field goal from Hopkins to tie the game at 13-13 early in the fourth quarter.

But disaster struck near midfield when Allen was sacked by linebacker Kyler Fackrell and stripped of the ball, which was scooped up by linebacker Tae Crowder and taken in for a 43-yard go-ahead touchdown that gave the Giants a 20-13 lead.

However, Washington was able to bounce back on their ensuing drive when Allen fired a 22-yard touchdown pass to wide receiver Cam Sims.

But instead of tying the game up with an extra point, Rivera opted for his team to go for two, as Allen scrambled around, hoping to either run it in or pass, but was forced to let go of the ball under pressure, and his pass was incomplete.

“We had good protection, so I wanted to go out and try to make a play,” said Allen. “I flushed to the left, and they stuck on their guys good. I thought I might have a shot to run in, but Jabrill [Peppers] took a good angle and ran me down.”

Allen finished the day going 31-of-42 for 280 passing yards, two scores, and an interception from the first quarter.

Now in the last place in the NFC East at 1-5, the Washington Football Team will continue their search for a second win against the rival Dallas Cowboys at home next Sunday at 1:00 pm.