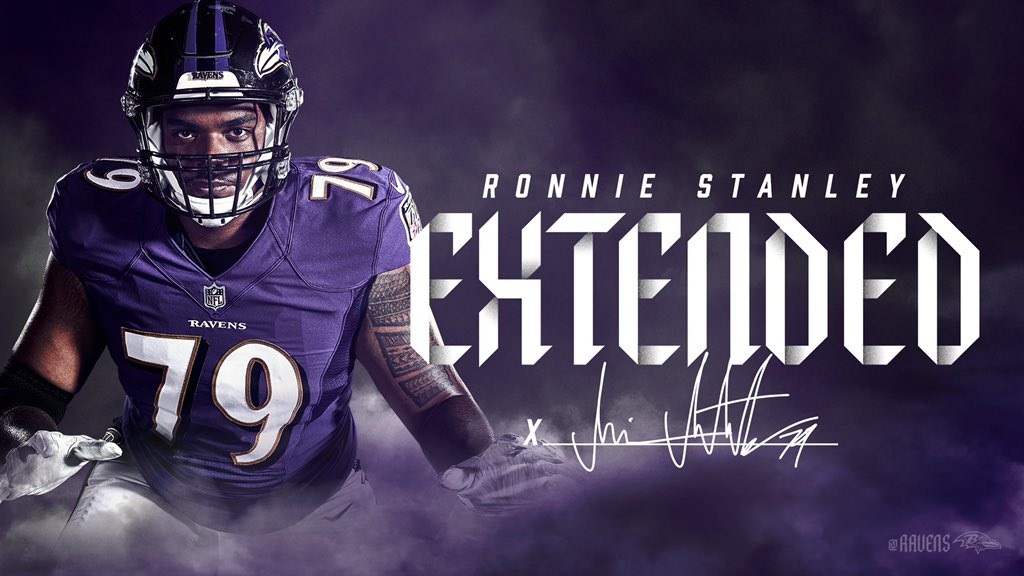 BALTIMORE – Lamar Jackson’s blind side will be in safe hands for the next five years as the Baltimore Ravens offered NFL All-Pro left tackle Ronnie Stanley to a five-year extension of $98.75 million through the 2025 season.

With an average of $19.75 million per year, Stanley will be the second-highest paid player at his position, trailing just Laremy Tunsil ($22 million) of the Houston Texans.

“More than anything, he’s a smart guy,” said Baltimore Ravens Head Coach John Harbaugh. “He understands the value of hard work. He really is a technician at what he does.”

The Ravens drafted Stanley with the sixth overall pick in the first round of the 2016 NFL Draft out of Notre Dame. He started all 12 games at the NFL level in his rookie season and has retained his starter status through all 61 games of his already five-year career.

Stanley made significant strides in 2019 when he earned his first Pro Bowl and All-Pro selection.

Considered as arguably one of the top pass-blocking tackles in the league, Stanley’s work on the offensive line contributed to the high-octane Baltimore offense, which ranked first in points per game (33.2 points) and rushing yards per game (206 yards) in the 2019 regular season.

“He’s a shutdown left tackle who excels on the field and in our community. This is just the beginning for Ronnie, and we could not be happier for him and his family,” said Baltimore Ravens General Manager Eric DeCosta.

In the month of October, the Ravens’ front office has been flexing their muscles with their pocketbooks. On the first day of the month, they extended cornerback Marlon Humphrey to a five-year, $97.5 million contract.

The front office also made moves to improve their team by acquiring outside linebacker Yannick Ngakoue (Maryland Terrapins) from the Minnesota Vikings on October 22.

With the upgrades to the team, both in the short term and for the long haul, Baltimore will showcase their improvements today at 1 p.m., as they come off a bye week to take on the Pittsburgh Steelers at home.