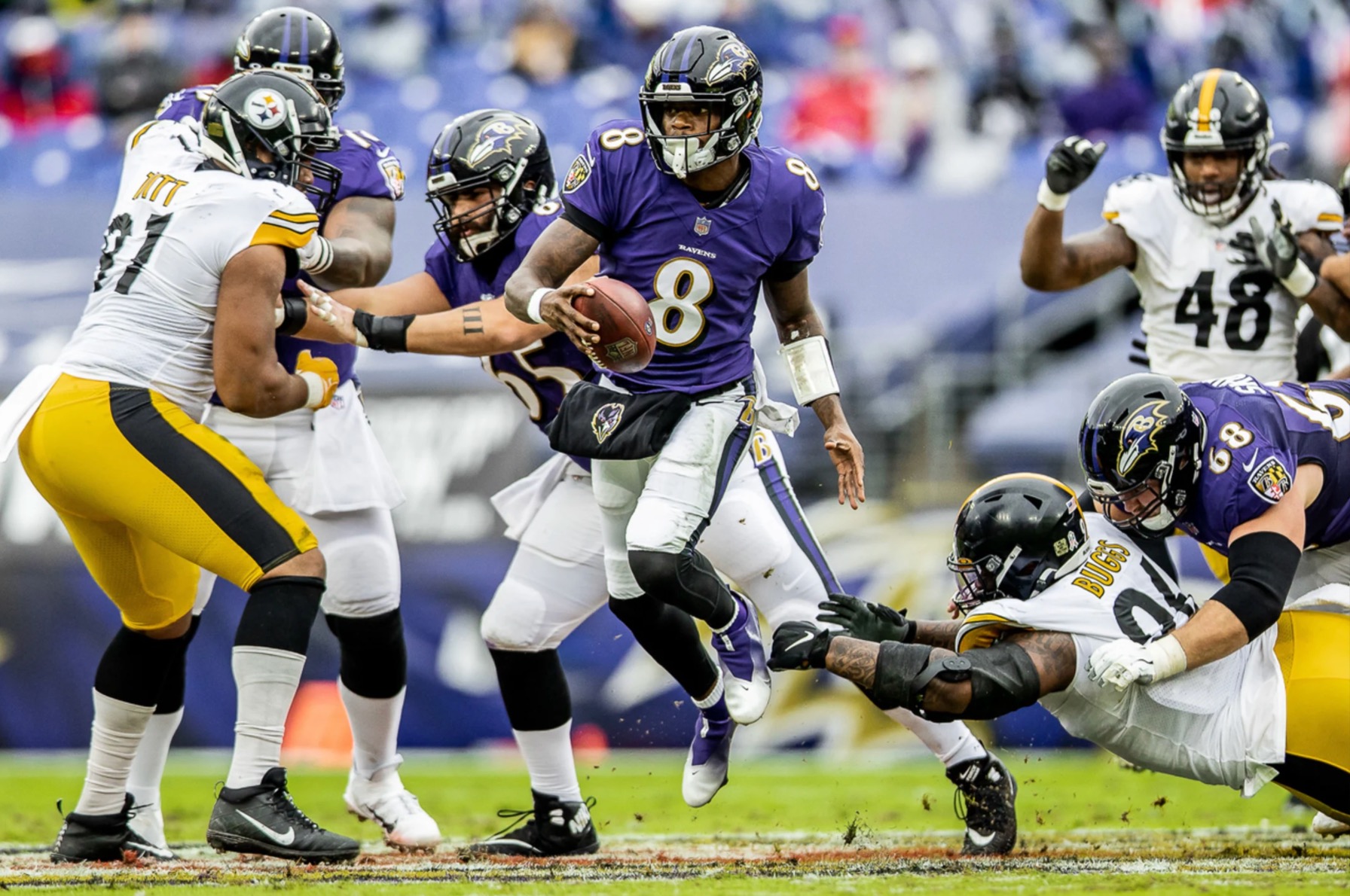 BALTIMORE – The Baltimore Ravens came off a bye week and led by double digits at halftime while they averaged more than double the yards than their opponents, the Pittsburgh Steelers, on Sunday.

However, four turnovers proved to be costly for Baltimore as they lose to their AFC North rivals 28-24 in front of 4,345 fans at M&T Bank Stadium.

The loss drops Baltimore to a 5-2 record, while the Steelers remain undefeated, which is one the second time in team history that the franchise has started the season with seven straight victories.

Pittsburgh struck first as Robert Spillane intercepted quarterback Lamar Jackson on Baltimore’s first possession and returned it 33 yards for a touchdown return to give the visitors an early 7-0 lead.

Baltimore quickly responded their second time back on offense. Despite the absence of Mark Ingram (ankle injury), the running trio of Lamar Jackson, Gus Edwards and J.K. Dobbins primarily ran the ball down the field during the nine-play drive.

It finished when Jackson found Miles Boykin in the endzone on a 6-yard touchdown.

Less than a minute after tying the game, Marcus Peters forced wide receiver Chase Claypool to fumble the ball after a 10-yard completion. Baltimore’s defense recovered the loose ball, making it 20 consecutive games with a takeaway.

Even though they had a free possession, the Ravens could not capitalize as Jackson lost the ball on a fumble in the red zone.

In the second quarter, Baltimore took control of the game following a 1-yard rushing touchdown by Edwards. Their lead extended 17-7 before halftime after kicker Justin Tucker connected on a 51-yard field goal.

Pittsburgh came out in attack mode for the third quarter, forcing Jackson to throw an interception on Baltimore’s first play of the second half. Two plays later, quarterback Ben Roethlisberger connected with tight end Eric Ebron for an 18-yard touchdown to put the Steelers within three points from regaining the lead.

After forcing a three-and-out, Pittsburgh answered with another touchdown thanks to a James Conner 1-yard touchdown run.

While the Steelers celebrated regaining the lead, 21-17, before the fourth quarter, Baltimore remained shutout, only the first time this season they did not score in a quarter.

Early in the fourth quarter, Baltimore retook the lead after a 3-yard touchdown pass to Marquise Brown.

Pittsburgh answered back with an eight-play, 80-yard drive that ended with an 8-yard touchdown run by Claypool, recapturing their lead with more than seven minutes remaining.

With time ticking away, Baltimore pressed forward until Jackson fumbled the ball during a running play with Pittsburgh defenders jumped on the loose ball, causing another turnover. Pittsburgh was unable to capitalize on the extra possession, giving Baltimore a chance to win the game.

Trailing 28-24 with under a minute left and starting on their 37-yard line, Baltimore moved quickly down the field thanks to a 45-yard reception by Willie Snead. As time expired, Jackson threw a Hail Mary attempt to the endzone for Snead again, but the pass was batted down, ending the game in favor of Pittsburgh.

Jackson finished the game completing 13 of 28 passes for 208 yards and two touchdown passes. He committed four turnovers off two interceptions and two lost fumbles in the red zone.

“The turnovers are the reason we lost the game,” Jackson, who finished 13 of 28 passing for 208 yards, two touchdowns and four turnovers, said. “I put that on me.”

Dobbins and Edwards (87) combined for 210 rushing yards. For Dobbins, his 113-yard output marked a career-high. On the receiving side, Snead led the Ravens with 106 yards.

To add on to the loss, the Ravens lost left tackle Ronnie Stanley to an ankle injury in the first quarter, and he will likely miss the remainder of the season. Just two days ago, Stanley signed a five-year extension worth $98.75 million.

“Ronnie is one of those guys that everyone in our locker room looks up to,” said Snead. “To see him go down like that, it hurts everybody. We just wanted to go out there and play all out for him.”

Baltimore will also be without Marlon Humphrey, who announced he tested positive for COVID-19 Monday.

“Wherever that might lead us, we’ll see,” Baltimore head coach John Harbaugh said. “We’re pretty optimistic about that at this point, but you never know. Hey, it’s 2020. We’ll take it as we find it,

The Ravens will travel to Indianapolis to take on the Colts on November 8 at 1 p.m. The Colts are 5-2 and are coming off a 41-21 victory over the Detroit Lions.