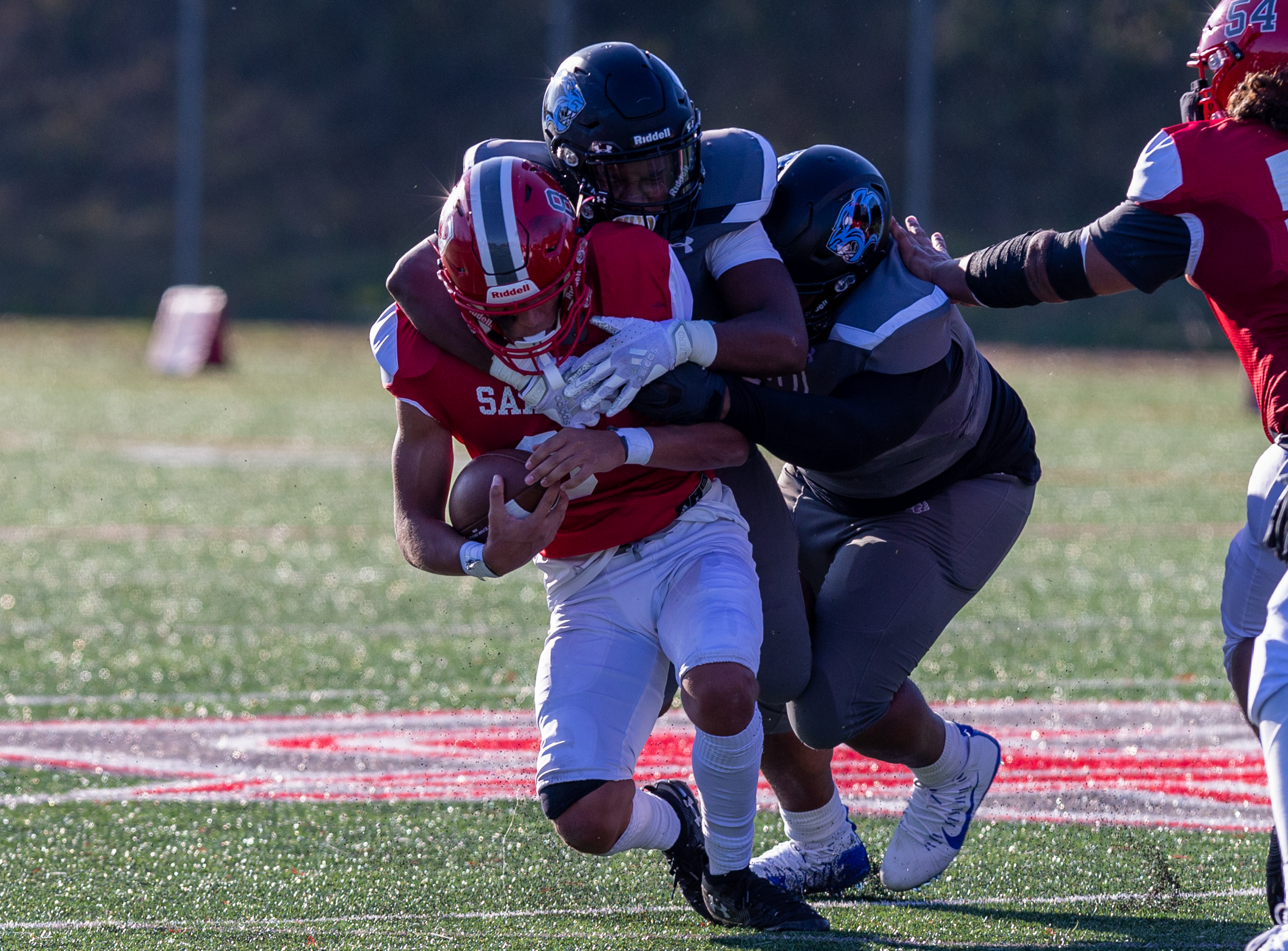 TOWSON – As the nation continues to battle its way through a global health crisis, the St. Vincent Pallotti and Concordia Preparatory School football teams were grateful to be back on the field in their season opener.

Pallotti brought intensity on the defensive end all game long, not allowing Concordia Prep’s offense to score, and did enough offensively to come away with a 15-6 win Saturday.

Both teams are coming off an extended layoff due to coronavirus restrictions placed on high school sporting competitions. The game was not as clean as either coaching staff might have desired, but there were no scrimmages or exhibitions as it would be under normal circumstances.

“First of all, I just think we’re just blessed to be healthy and to be out here and to get the opportunity,” Pallotti head coach Tony Ashley said after the win. “We got a lot of things to fix [but] we’re just glad to be out here.”

Quarterback Kenneth Prince was 7 of 13 passing for 101 yards to lead the Panther offense. Ejau Collazo alternated at signal-caller with Prince and completed 3 of 9 passes for 43 yards, a touchdown and an interception.

There wasn’t much action early on. The Panthers tried to get going but committed a turnover-on-downs to close out the first quarter.

Most of the second quarter was much like the first until Pallotti’s second drive. Collazo found receiver William Webster-Brown for a 28-yard touchdown. After the missed PAT, Pallotti held a 6-0 lead.

Just before halftime, as Pallotti tried to extend its lead, Collazo’s attempted pass was deflected then intercepted by Concordia Prep defensive lineman Terrell Bartee. It gave the Saints a confidence boost heading to the locker room.

It was the first of five turnovers the Panthers, last season’s MIAA-B conference champions, committed (one interception and four fumbles). Most of the mistakes came primarily due to missed assignments and mishandled snaps. Combined, both teams committed six turnovers.

“We definitely started off slow with it being our first game, our first bump really, in a long time,” said senior receiver Isaiah Perkins, who finished with five catches for 63 yards. “We just got to keep working, get back to practice. Long week of practice this week, we’re going to get it together.”

In the second half, running back Clayton Bullock-Thomas Jr. was more involved in Palllotti’s offense, taking several handoffs.

The junior bulldozed through the defense and broke loose for a 20-yard touchdown that put the Panthers ahead 15-0. For the afternoon, he tallied five carries for 36 yards rushing.

“We’ve been put on a short timetable to go play this season, so I knew it was going to take a little bit longer for our offense to click,” said Concordia first-year Coach Joe Battaglia. “Awesome effort on the defense, but we got to put the whole thing together, and that’s going to take some time. But I’m really proud of our kids and how they fought.”

Only a minute away from a shutout win, Prince’s rush attempt resulted in the ball being knocked loose and recovered by Concordia Prep’s Gabe McArthur. The junior linebacker scampered down the field for a 70-yard fumble return as the Saints’ sideline erupted.

A failed two-point conversion narrowed the deficit to 15-6 with a minute left on the game clock. An unsuccessful onside kick was recovered by the Panthers, securing the win.

When the Panthers (1-0) and Saints (0-1) met last season, the outcome was much closer, with Pallotti pulling off a 14-13 win. Ashley was glad his team got the best of Concordia Prep again, especially considering how tenacious its defensive line is known to be.

“They’re well-coached; they have a very, very good defensive line,” Ashley said. “We just got to fix our mistakes. It was our first hit, first time playing 11-man football for us; so, we just got to fix the mistakes. We’re better than what we showed today.”

Next for Pallotti will be MIAA powerhouse Calvert Hall, scheduled for Friday at 7 p.m.