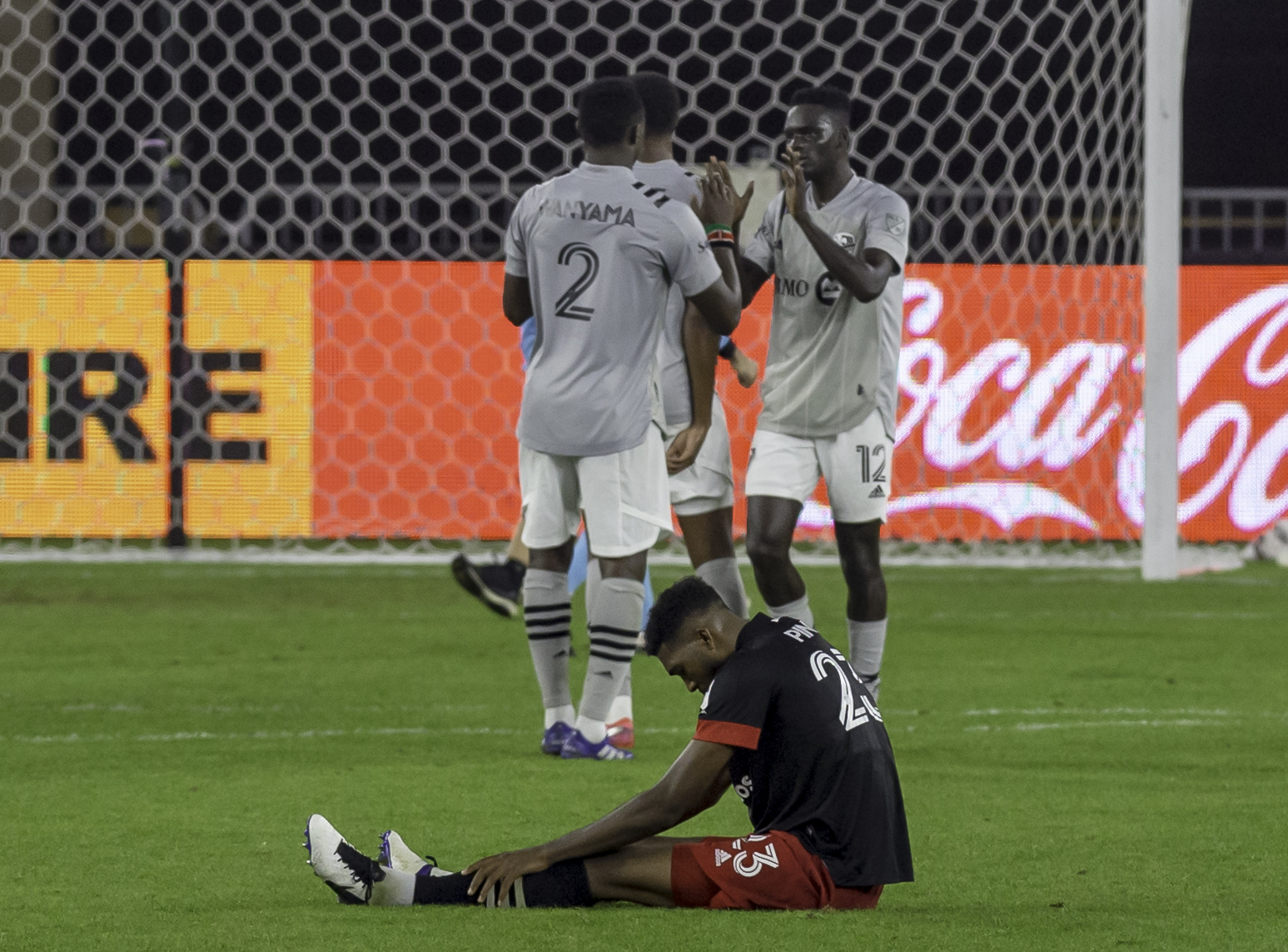 WASHINGTON – D.C. United entered halftime in their match against the Montreal Impact Sunday afternoon with one foot inside the MLS Cup Playoff competition.

Everything was going to plan with United up 2-1 despite losing an attacker early in the match. Then, the second half began, and United’s playoff chances began to unravel.

The visiting Impact scored two vital goals late in the second half to conquer United with a 3-2 victory, putting an end to the Black and Red’s roller-coaster season.

With other Eastern Conference results playing to both teams’ favor, the match-winner was heading to the playoffs’ play-in rounds.

Injuries continued to decimate United (5-12-6, 22 points) before the match and during the opening minutes. Defensive back Chris Odoi-Atsem remained out after suffering a concussion against Atlanta United two weeks ago.

Despite Frédéric Brillant’s return from a yellow card suspension, Odio-Astem’s absence forced D.C. to play without a wing-back as part of their defense.

Moments after the opening whistle, striker Gelmin Rivas collided with Montreal goalkeeper Clément Diop while attempting to chase down a loose ball. Rivas injured one of his knees and could not return, forcing United to burn an early sub to bring on Ola Kamara.

Even with all the early misfortunes, D.C. was the first to score in the ninth minute when Donovan Pines jumped over two defenders to header a Julian Gressel cross for his third goal of the season.

Montreal quickly responded four minutes later, as Bojan Krkić tapped in a Romell Quioto cross to tie the contest. Both teams traded attacks until United capitalized again off a corner kick, with Kamara connecting with a header of his own to give D.C. a 2-1 lead in the 33rd minute.

United continued attacking in the second half, but Diop made multiple stops, finishing the match with five saves.

Arriola, who suffered a torn ACL in the preseason, made his first appearance of the season in the 69th minute, bringing new life to the attack with his speed.

The California native almost scored United’s third, but his close-range shot bounced off a Montreal defender and went wide.

In the 74th minute, he delivered a driven cross that connected with Victor Wanyama. The Kenyan’s header slammed inside the goal net, beating a diving Bill Hamid, to tie the game.

United pressed forward to look for the game-winner in the 88th minute, Montreal seized the moment to counterattack again. Quioto ran past the defense and received a Mason Toye center to score a tap-in goal to give the Impact a berth into the playoffs.

“We needed to punish them when we were up 2-1,” D.C. United Head Coach Chad Ashton said about United’s play for the final 15 minutes. “I thought we could have punished them on a few counterattacks, and we did not execute a little foot here, and there were times where we should have kept the ball, be patient, and made them defend for long periods of time.”

As the final whistle blew in the 94th minute, several United players were distraught and visibly emotional that their chance to make up ground after a tough 2020 season was over.

However, Ashton said he hopes that the loss turns into a positive for the players and the organization going forward.

The way the group rebounded after the firing of Ben Olsen to go on a three-game winning streak and be three points shy from a playoff berth is something to build around heading into 2021.

“I was looking forward to shutting people up and showing them that we are for real, but that is the way it is,” Arriola said about the “bittersweet” loss that featured his return to the field. “A month ago, we were definitely not in the position that we got ourselves in at the start of today, so I am proud of every single one [of my teammates].”