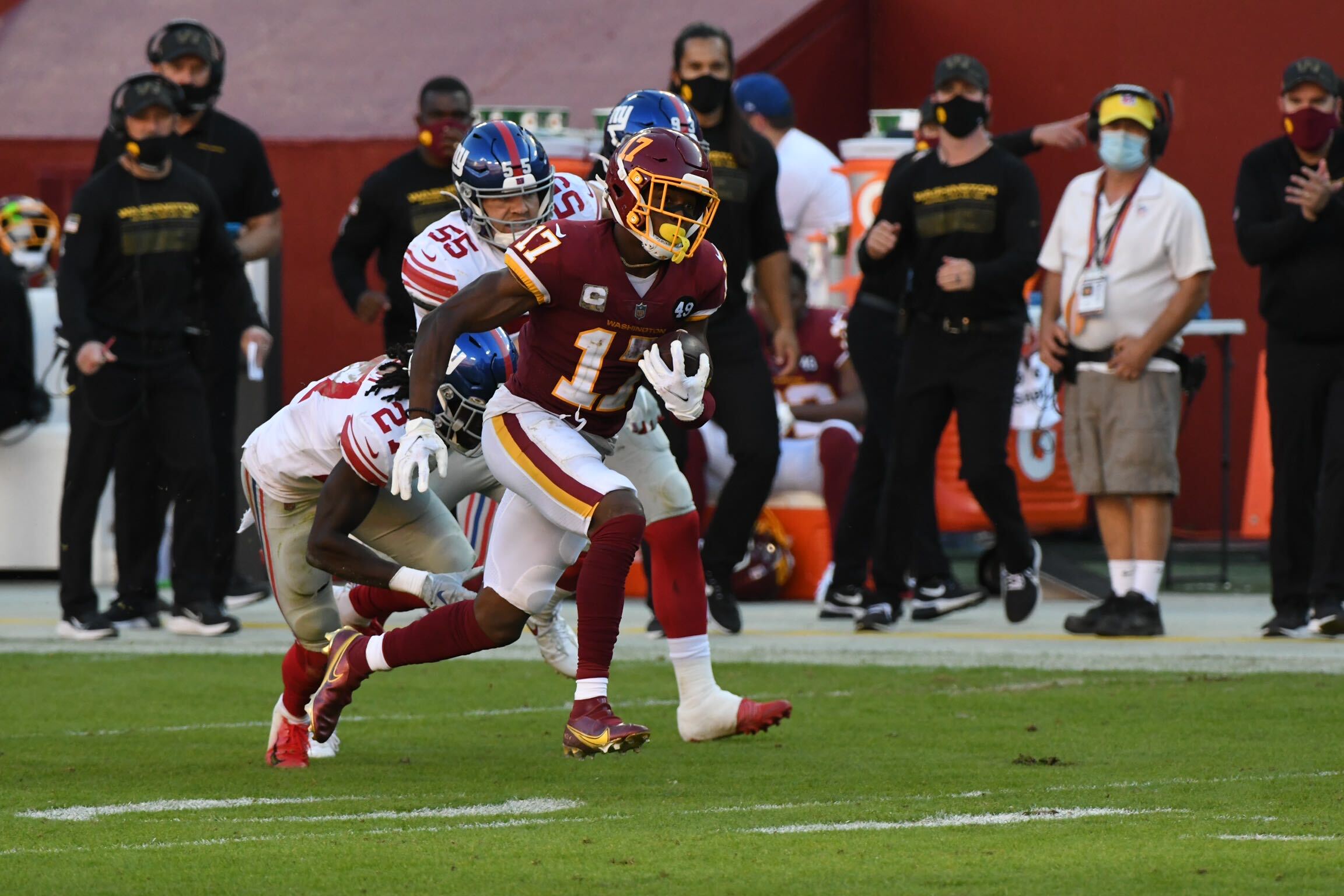 LANDOVER – Coming off a bye week, the Washington Football Team returned to action Sunday afternoon at home against New York Giants. In Week 6, Washington’s NFC rivals held on for a one-point victory.

This time, quarterback Alex Smith stepped in for an injured Kyle Allen and attempted to lead Washington to a comeback victory. Instead, two costly interceptions gave the Giants the 23-20 win and the season sweep.

The first half was very rough for Washington (2-6), as the offense turn the ball over three times and could only get a field goal in five drives.

One of the turnovers allowed quarterback Daniel Jones to lead New York on a seven-play, 61-yard drive, which resulted in a 38-yard field goal by Graham Gano, to give the Giants an early 3-0 lead.

New York (2-7) got the ball back when Washington returner Isaiah Wright muffed a punt return, picked up the ball, then lost it again. Giants cornerback Madre Harper recovered the loose ball at Washington’s 16-yard-line.

New York capitalized on that turnover when running back Wayne Gallman scored from 2 yards out to put his team up 10-0 with under five minutes left in the first quarter.

On Washington’s ensuing drive, Allen was driving his team down the field until he suffered a brutal ankle injury on a hit from Giants safety Jabrill Peppers. Allen needed to be carted off the field and Washington confirmed that he would be out for the rest of the season.

Smith came into the game, making his second appearance this season, and began to move the offense to put Washington in field goal range. Kicker Dustin Hopkins converted a 48-yard field goal to cut the deficit to 10-3 early in the second quarter.

“Obviously, a ton of emotions going on for me right then in the sense that I knew Kyle was down,” said Smith. “I knew it was pretty serious once he stayed down.”

New York was able to add another touchdown after a 16-yard connection from Jones to tight end Evan Engram to go up 20-3. With less than a minute remaining, linebacker Blake Martinez collected the Giants’ second interception of the game, giving the away team confidence going into halftime.

Washington’s offense began improving in the third quarter as they drove 75 yards downfield in their opening drive. They ended the sequence with running back Antonio Gibson leaping into the end zone for a one-yard touchdown run to cut the deficit to 20-10.

After both teams added a field goal each, Washington restarted its comeback. Smith fired a pass to wide receiver Terry McLaurin, who broke free from several defenders for a 68-yard touchdown, dropping their deficit down to three points.

Late in the fourth quarter, Smith led the Washington offense again, looking to get close to field goal range to tie or score a touchdown to take the lead. However, moments before the two-minute warning, as Smith attempted to go downfield, his pass was intercepted by Peppers.

Washington’s defense forced New York to punt after a three-and-out, giving the home team life once again. Starting on their 28-yard line, Smith completed a 4-yard pass and quickly set up a no-huddle offense with time ticking away.

Smith snapped the ball and fired a midrange pass towards McLaurin, but cornerback Logan Ryan stepped forward for the game-clinching interception with 1:16 remaining.

Between the two Washington quarterbacks, Allen completed 5 of 7 attempts for 62 yards before getting hurt. Smith went 24 of 32 for 325 yards for one touchdown and three interceptions.

McLaurin and Cam Sims both had 100-yard receiving performances in the losing effort. McLaurin caught seven balls for 115 yards, while Sims made three catches for 110 yards.

The Washington Football Team will head to Detroit next to face the Lions next Sunday at 1:00 p.m.