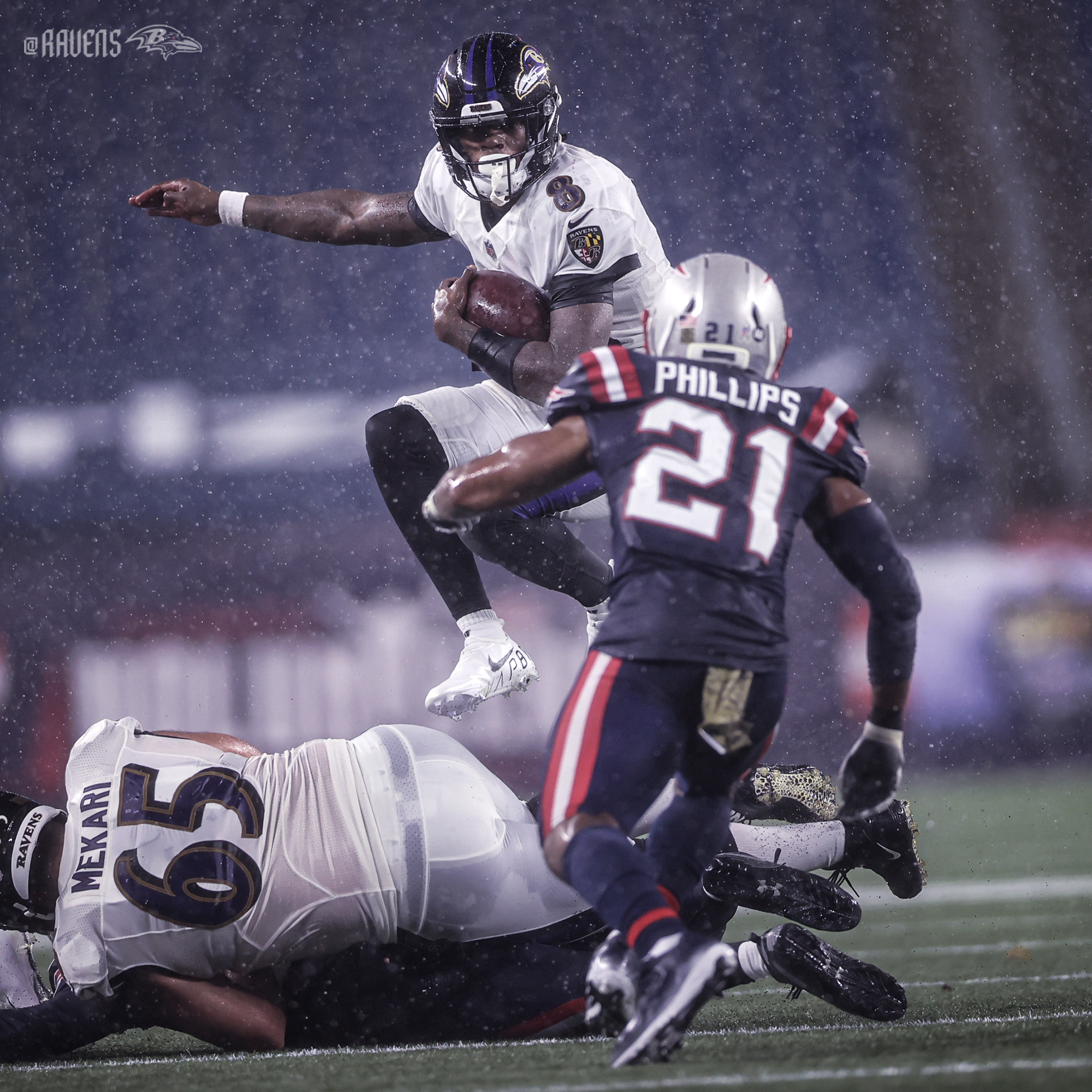 Despite neither team scoring in the final quarter, Sunday’s matchup came down to the final possession, with the Ravens in position for late-game heroics. The weather conditions constrained Baltimore’s offensive attack through dropped passes and poor snaps.

“The first quarter was okay, and then once the game started going, the rain started picking up, and by the fourth quarter, it was a heavy downpour,” said wide receiver Willie Snead, who served as one of the bright spots for Baltimore with two touchdown receptions.

With more moderate weather in the early parts of the game, Baltimore took the first lead as Jackson shoveled a pass to Snead for a 6-yard touchdown. It was Snead’s first touchdown since Week One.

After the Patriots tied the game with a 7-yard touchdown reception by Rex Burkhead, the Ravens answered back on an 11-play drive that resulted in a 24-yard field goal by Justin Tucker.

With just over a minute left in the second quarter, Baltimore had a chance to gain some momentum, but J.C. Jackson intercepted Jackson, quickly ending the drive. It was Jackson’s fifth interception of the year.

“We were just trying to make something happen,” Jackson said. “But, the conditions [and] the weather wasn’t on our side. Every time we were up, it felt like [the rain] was coming down even harder.”

New England dominated the early parts of the third quarter. It took only four plays, capped off with a 4-yard touchdown run by Newton, to score in their opening drive.

On Baltimore’s next drive, an errant snap to running back Mark Ingram in the Wildcat formation by center Matt Skura turned the ball over on downs. It led to a New England field goal, giving the Patriots a 23-10 lead.

In the final seconds of the third quarter, Baltimore cut the lead to 23-17 as Jackson found Snead for the second time in the game for an 18-yard touchdown pass.

The score would stand as the rain turned into an all-out downpour in the fourth quarter. With the weather playing a factor, the Ravens’ offense only completed four passes and failed to get out of their own territory, turning the ball over on downs.

Jackson, who’s been compared to Newton throughout his career, ironically joined his counterpart on Sunday night as the only quarterbacks in league history to rush for at least 500 yards in each of their first three seasons. The individual accolades were of little significance for Jackson in the losing effort.

“We’re ticked off; no one likes losing,” said Jackson. “We just have to regroup. Tuesday, we will watch film on our opponent, Tennessee, and go on from there.”

Baltimore’s defense failed to force a turnover, ending a streak of 21 consecutive games with a takeaway. To add insult to injury, Baltimore also lost tight end Nick Boyle, who suffered a season-ending knee injury. Boyle has caught two touchdown passes this season and missed only one regular-season game due to injury since 2017.

“It sucks to see Nick go down because he’s such a hard worker and a big part of our running game and everything we do offensively,” said Snead.

The Ravens will also have to face challenges within the standings as their 6-3 record lies even with the Cleveland Browns for second in the AFC North. Both teams trail the undefeated Pittsburgh Steelers (9-0).

With a chance to inch closer to the top of the standings, Baltimore returns home to take on the Tennessee Titans (6-3) on Sunday. Tennessee is coming off a bye week and has lost three of their last four games.