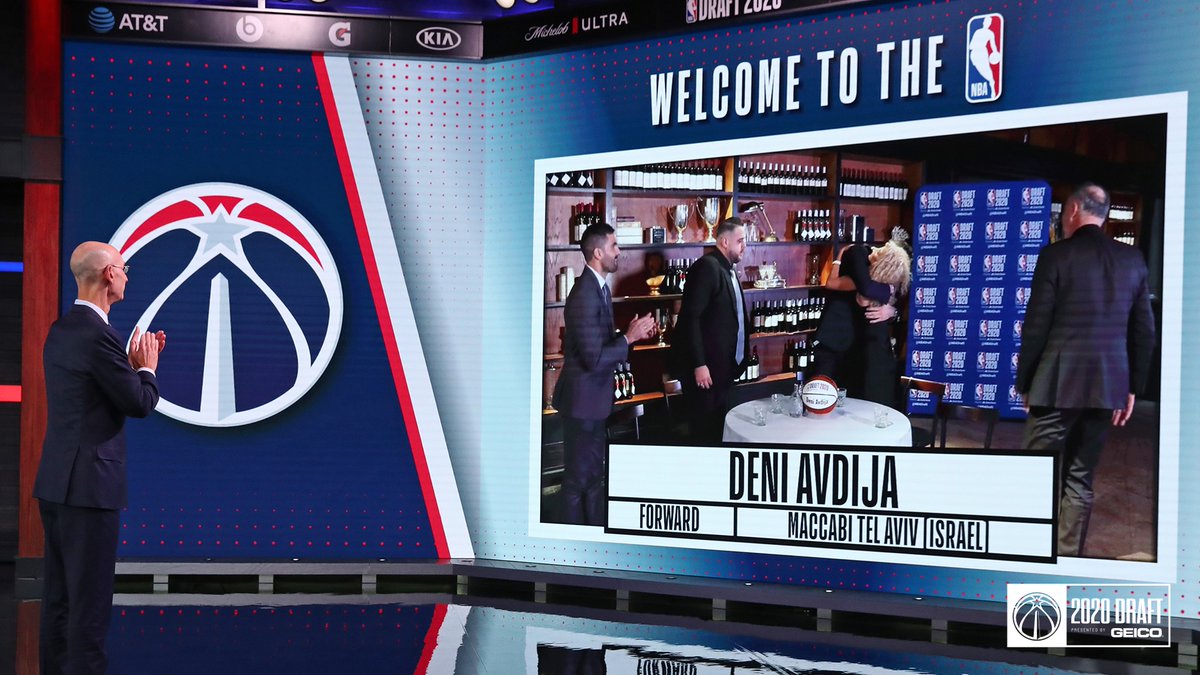 WASHINGTON – The Washington Wizards goes international in the 2020 NBA Draft Wednesday as they selected Israeli Deni Avadija with the No. 9 overall pick.

At 19 years old, Avdija entered this year’s draft as the top international prospect. Washington’s scouts began following him after his professional debut in 2017 as a 16-year-old with Israeli club Maccabi Tel Aviv.

The 6-foot-9-inch forward in high regard for his size, guard skills and his playmaking abilities.

“I love his toughness,” head coach Scott Brooks said. “He steps on the court and competes. He’s going to make our practices and games better. I love guys that play with emotion.”

His physical tools and ball-handling skills allowed him to become the youngest MVP in Israeli Premier League history after averaging 12.9 points per game and collecting 6.2 rebounds per game.

“I’ve kinda faced a lot of challenges that got me (to be) a better player,” Avdija said in a post-draft conference Thursday. “I think I’m ready, and skill-wise I have a lot to work on definitely [and] to improve.”

For general manager Tommy Sheppard, the keyword that described his selection was Avdija’s versatility.

“We were very grateful he ended up falling to No. 9,” Sheppard said. “He’s somebody that has great potential as a wing, secondary playmaker. We think he’s just going to complement our talent, be able to play with every possible lineup we throw out there.”

Avdija became the fourth Israeli-born player to play in the NBA. He is only the second member of his family to play professionally as his father, Zufer, played for multiple teams in Israel and the former Yugoslav league in the 1970s and 80s.

With his victorious track record, Aydija hopes that Wizards players and fans can appreciate the winning mentality he plans to bring to the nation’s capital.

“I think I can (add) good benefits to the Wizards right away,” Aydija said. “I have a good basketball IQ; I think I’m a great teammate, very unselfish and I’m a big competitor. I like to win.”

In the second round of the draft, Washington selected guard Vít Krejčí with No. 37 overall pick. They trade him and Admiral Schofield to the Oklahoma City Thunder for Cassius Winston, chosen with the No. 53 overall pick, and a 2024 second-round pick.

Winston comes to the nation’s capital after a decorated collegiate career at Michigan State.

In his four-year tenure with the Spartans, the 6-foot-1-inch guard earned First Team All-Big Ten honors twice, named a Second Team All-American, and awarded the Big 10 Player of the Year in 2019.

“Cassius has a proven resume and is a tremendous leader whose tough, unselfish style will allow him to develop within our system,” Sheppard said.