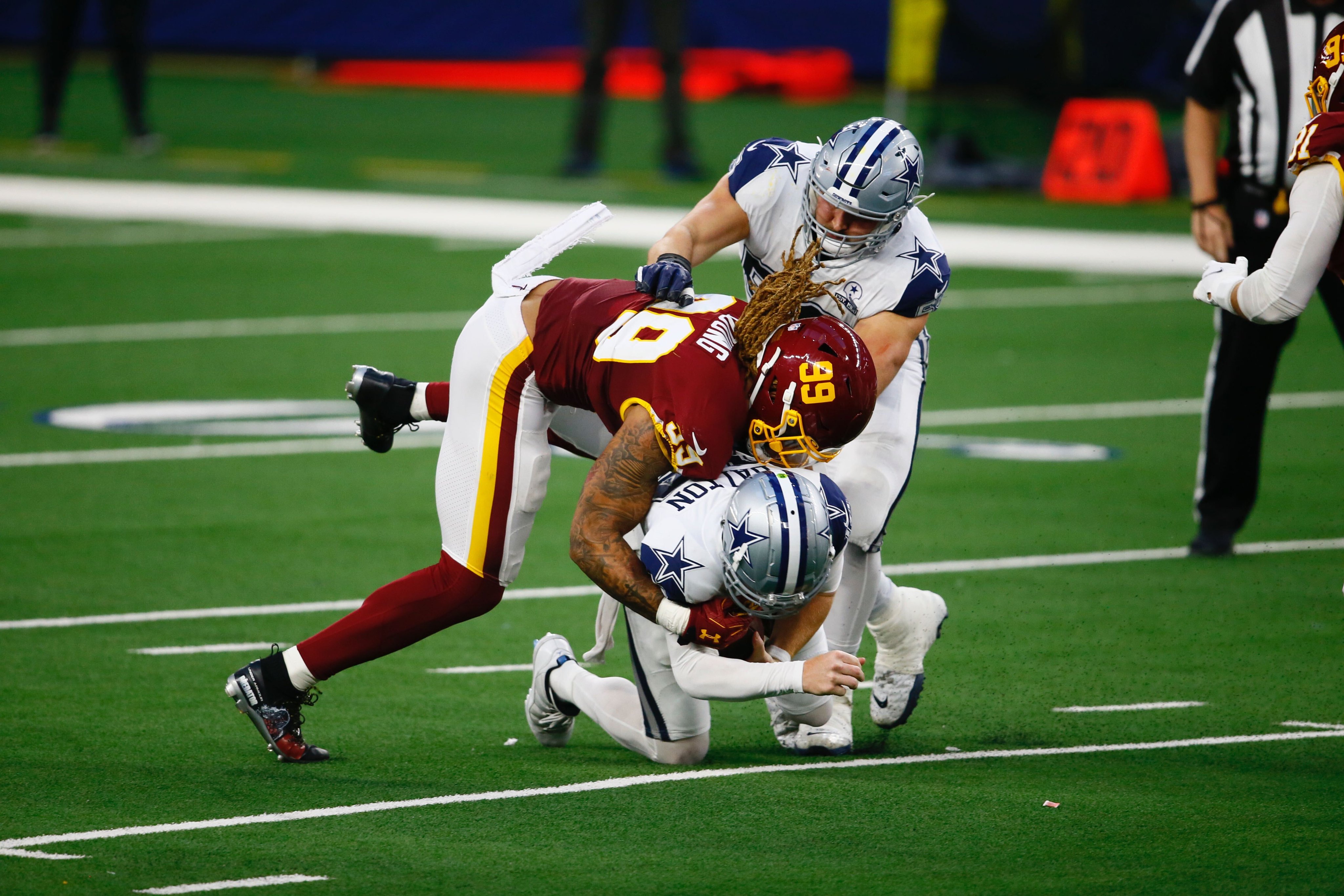 WASHINGTON – The Washington Football Team visited the Dallas Cowboys on Thanksgiving Day Thursday for the third time in five years, looking to complete the season sweep of their archrivals.

Despite a close first half, Washington dominated most of the contest, with Antonio Gibson scoring three rushing touchdowns en route to a 41-16 victory over the Cowboys to take sole possession of first place in the NFC East.

“Honestly, it’s the story of my life,” said Gibson. “To be able to come out on national TV and do this is an amazing feeling.”

Gibson’s first score of the game came on a five-yard TD run that capped off a 12-play, 75-yard drive to give Washington a 7-3 lead late in the first quarter.

However, Dallas’s ensuing possession resulted in the quarterback Andy Dalton fired a deep pass to wide receiver Amari Cooper down the sideline for a 54-yard touchdown to retake the lead, 10-7, early in the second quarter.

Dustin Hopkins tied the game with a 23-yard field goal. With the Cowboys turning the ball on downs on their next possession, the Burgundy and Gold capitalized again when quarterback Alex Smith connected with tight end Logan Thomas for a 5-yard score to give Washington a 17-10 lead.

Late in the second quarter, the Cowboys attempted to drive down the field to score a touchdown, but the Washington defense held Dallas to just three points off a 32-yard field goal as they entered at halftime with a 17-13 lead.

On the third quarter’s opening possession, Cowboys running back Ezekiel Elliott fumbled the ball, and defensive end Jonathan Allen recovered, which led to Hopkins nailing a 36-yard kick to extend the lead to 20-13.

But later in the third quarter, Smith took a hit mid-throw, causing his pass to get intercepted by Dallas’ Jaylon Smith. Washington wide receiver Terry McLaurin chased down the linebacker at the 4-yard line.

Dallas’ offense failed to convert the turnover into a touchdown, resorting to Greg Zuerlein drilling a 28-yard field goal to cut the deficit to 20-16.

“I was just trying to make a play,” said McLaurin about his tackle. “But when our defense got that stop, that’s when I kind of felt like, ‘Wow, that was a big play.’ You never give up on any plays because you never know what’s going to happen.”

The turning point came early in the fourth quarter when the Cowboys attempted a fake punt on a fourth down inside their own territory.

The trick play, which was a rushing attempt with a lateral, went nowhere. Washington’s defense tackled Cedrick Wilson Jr. for their second turnover on downs.

It did not take long for Washington’s offense to take advantage as Gibson drove through the heart of the Dallas defense untouched for 23 yards and his second touchdown of the game.

The Burgundy and Gold’s next offensive drive went ten plays and 76 yards, as Gibson once again torched the Dallas defense for a 37-yard run up the middle. His third score of the game extended their lead to 34-16.

Washington’s defense sealed the game when Dalton’s pass was tipped and picked off by defensive end Montez Sweat, who returned it for a 15-yard touchdown with 3:24 left.

“It means a lot,” Washington head coach Ron Rivera said. “For them to come out and play well over our divisional rivals on Thanksgiving as they did, especially in the second half, that’s huge. It really is.”

By the end, Gibson rushed for 115 yards and scored three touchdowns, while Smith looked solid passing-wise, going 19 of 26 for 149 yards and a score.

Up next, Washington will visit the undefeated Pittsburgh Steelers on Dec. 6 at 1 p.m.