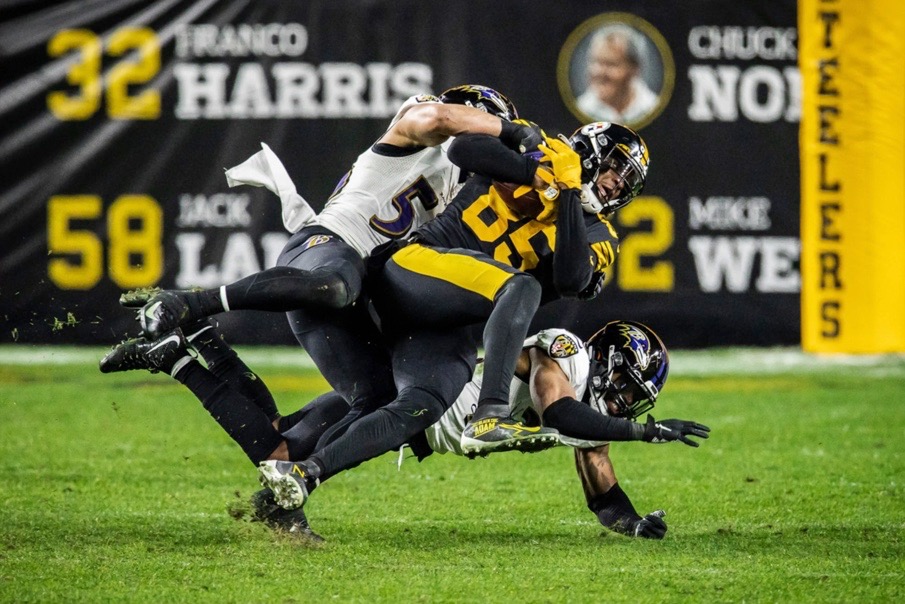 BALTIMORE – Six days after not playing on Thanksgiving night, the Baltimore Ravens and the Pittsburgh Steelers finally met Wednesday in a delayed matchup following an outbreak of COVID-19 at the Ravens’ facilities.

Playing shorthanded, Baltimore’s offense produced their lowest scoring output of the season as the Ravens lose on the road 19-14 to their undefeated rivals.

The result was Baltimore’s third straight loss and their fourth in five games. They entered the game, missing several of their offensive weapons, including starting quarterback Lamar Jackson, running backs Mark Ingram and J.K. Dobbins and tight end Mark Andrews.

However, after a week of canceled practices and a lockout facility, Ravens players said they were happy to return to the field despite the result.

“Everyone in the Ravens organization did the best thing they could for players’ safety and to make sure this game happened,” said Baltimore offensive lineman Bradley Bozeman.

“I want to commend all the guys for how hard they fought today,” said Baltimore quarterback Robert Griffin III. “The guys showed a lot of grit and determination today; a lot of toughness being in the situation we were in.”

Following an uptick in positive cases for both teams, the game was rescheduled multiple times throughout the week, from Thursday to Sunday to Tuesday, before kicking off on Wednesday. Baltimore alone had 19 players on the reserve/COVID-19 list.

With a shorthanded roster, Griffin took the helm as the starting quarterback for Baltimore. The former No. 2 overall pick from the 2012 NFL Draft made just his second start since joining the Ravens in 2018. He showed signs of rust early on, committing two turnovers, including a lost fumble and an interception returned for a Pittsburgh touchdown.

Baltimore’s defense and special teams stepped up for their lagging offense, despite also missing key players. The defensive line pressured quarterback Ben Roethlisberger throughout the game, forcing him to throw directly to linebacker Tyus Bowser in the end zone for his second interception of the season.

When Baltimore punted on their following offensive possession, Davontae Harris forced a punt return fumble with a hard hit on Ray-Ray McCloud. The Ravens jumped on the loose ball, collecting it at the 16-yard line.

The Baltimore offense needed four plays to capitalize on the muffed punt turnover before Gus Edwards ran up the middle for a 1-yard rushing touchdown to give the Ravens a 7-6 lead.

Pittsburgh (11-0) answered with a pair of field goals in the second quarter and kept the Baltimore offense dormant, limiting them to just two offensive drives in the period. Baltimore had a chance to take the lead entering the half but clock mismanagement and a dropped pass in the end zone as time expired kept them from adding to their score.

While Baltimore kept the game close on the scoreboard, the net passing yards between both teams (145-11) showed how limited they were without several key weapons. The trend continued as they did not score the whole third quarter, punted three times, and traveled 14 total yards on offense.

Pittsburgh took advantage of Baltimore’s offensive failures as they completed a 12-play drive with a 1-yard touchdown pass to JuJu Smith-Schuster to extend their lead early in the fourth quarter. Meanwhile, the Steeler defense continued limiting Griffin’s effectiveness, as he finished the game with 33 passing yards and 38 rushing yards in his outing.

But the Baltimore offense wouldn’t have an opportunity for any late-game heroics as Pittsburgh ran out the clock for the victory. The Steelers completed the season sweep over Baltimore, the first since 2017.

“We had the issues in the first quarter with the turnovers; that hurt us,” Baltimore head coach John Harbaugh. “That probably ended up being the difference in the game. But once we got our sea legs, so to speak, I thought we did a good job with that.”