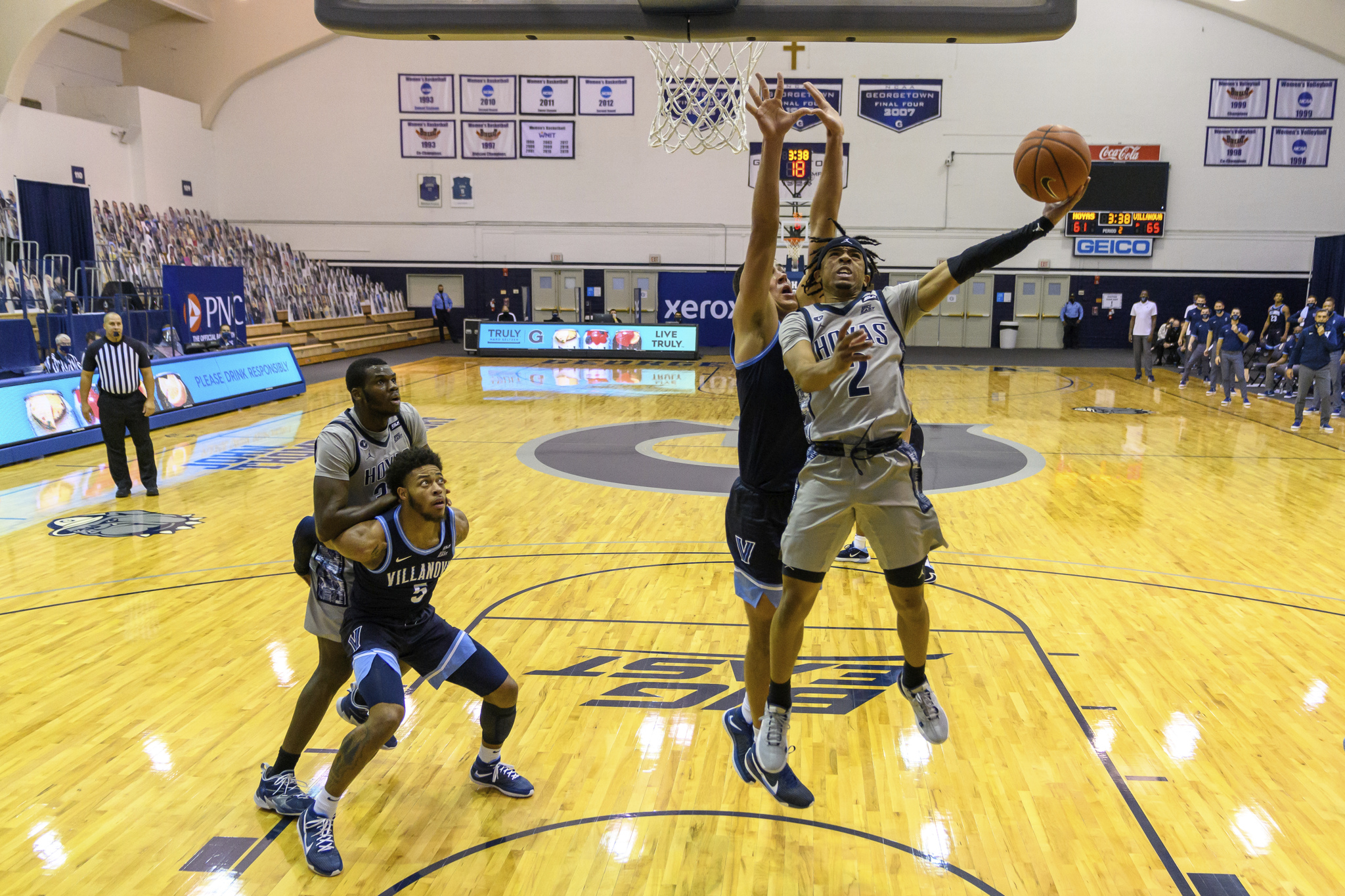 WASHINGTON – A late 16-2 run helped the Villanova Wildcats (5-1) defeat the Georgetown Hoyas (2-3) by a final score of 76-63 Friday night in their first Big East Conference game of the season.

The Wildcats were able to turn around a 13-point deficit at halftime and controlled the advantage throughout the first half.

Villanova came out firing at all cylinders after halftime going on a 20-4 run to take the lead, scoring 10 straight points to take a 53-50 early in the second half.

“I don’t think they did much to change the pace of the game. I just thought that we took bad shots. In the first half, we had three turnovers. We had nine in the second half. We were doing a good job of getting the ball inside to Q. He missed some easy shots in the second half that he was making in the first half. I think all of those things played a role, and then they got hot,” Said Hoyas head coach Patrick Ewing after the game.

Georgetown dominated the game early with a 17-7 lead, but Villanova cut into that deficit, reducing the advantage to three.

Midway through the first half, the Hoyas would go on a 16-3 run to expand their lead heading into the half. Leading the charge on the five-minute run were senior forward and D.C. native Jamorko Pickett, sophomore guard Qudus Wahab and senior guard Jahvon Blair.

Pickett finished the night notching a double-double with 16 points and 10 rebounds, while Wahab and Blair would both score 12 points and 11 points, respectively.

Wahab pulled down 5 rebounds, and Blair racked up 3 assists and 3 rebounds. The Hoyas received scoring from their reserves as another D.C. native freshman Dante Harris would score a career-high nine points coming off the bench.

After the early 20-4 run from Nova, Georgetown bounced back and kept the game competitive, taking a one-point lead for most of the second half.

However, Villanova caught their second wind late in the game scoring eight points quickly before the final media timeout and finished the contest with a 16-2 run to put the game out of reach for the Hoyas.

“Tonight, you know we just we self-destructed in the second half, with three minutes ago we were right there I think we It was a one-point game,” Ewing said. Then we started, you know, worrying about Who’s shooting who’s, you know, taking bad shots instead of just going to continue to play.”

Georgetown will play St. John’s at home on Sunday night. This game was formed because Georgetown’s original opponent, Connecticut, had to pull out from playing the game due to Covid-19 concerns. No word from the Big East or the NCAA whether the game against UConn will be rescheduled.