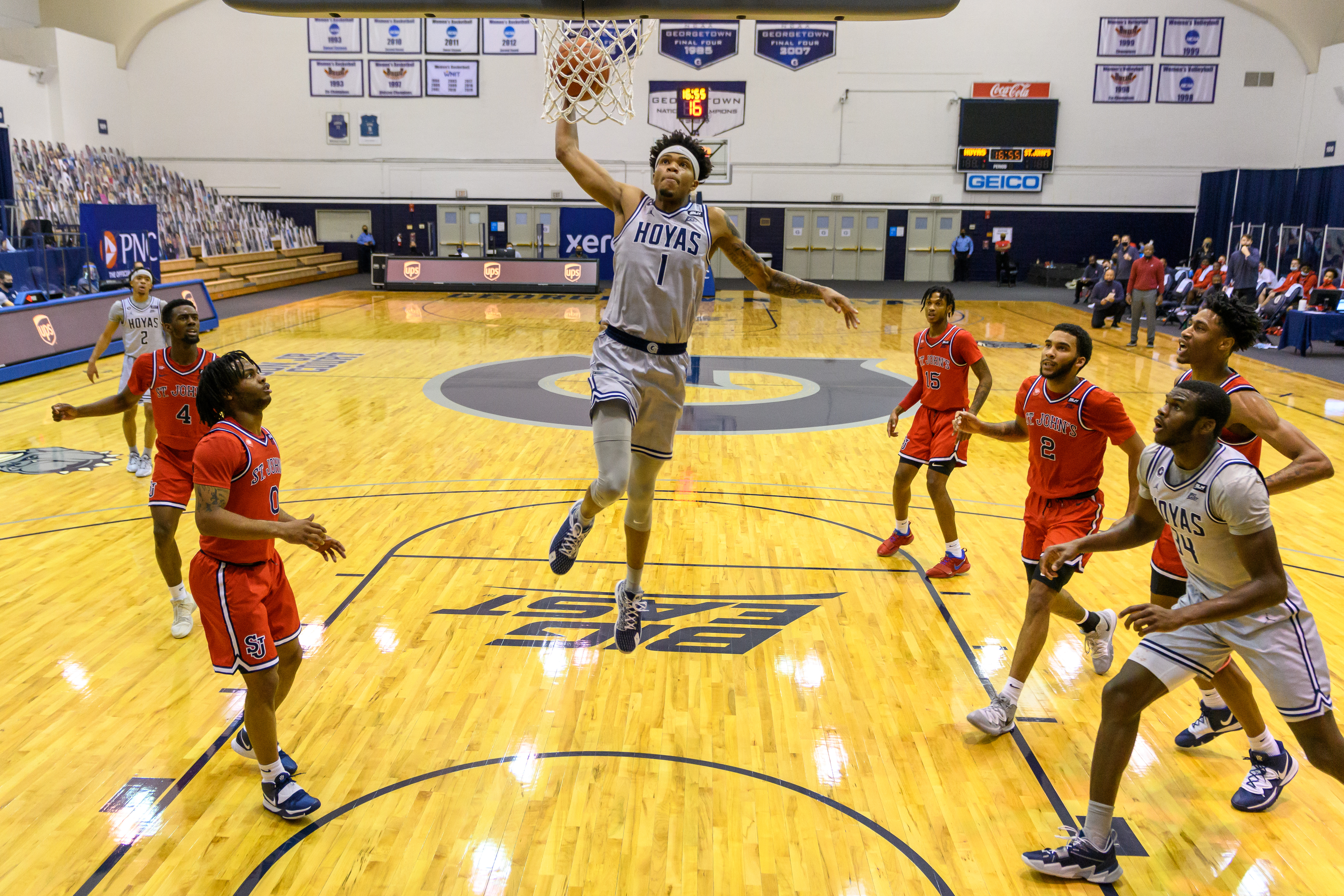 WASHINGTON – Following a back and forth affair, the Georgetown men’s basketball team earned their first win in Big East Conference play when they defeated St. John’s, 97-94, in overtime Sunday night.

However, with the pandemic playing a role in the schedule, the Hoyas will have to repeat their performance in the second of a home and home series against the Red Storm this Sunday in New York.

Georgetown (3-3, 1-1) relied on a massive game from sophomore Qudus Wahab who finished the night noticing a double-double with 17 points and 10 rebounds along with a career-high 9 blocks. After the Hoyas’ early began slipping away, the sophomore and teammate Donald Carey went on a 9-0 run that put them back in control with a 42-40 halftime advantage.

Head coach Patrick Ewing said Wahab’s performance and dominance on the boards was comparable to Hoya greats such as Dikembe Mutombo and Alonzo Mourning. While the Nigerian appreciated his coach’s sentiment, he said the results matter more.

“I don’t really care about stats; I’m just trying to do my business,” Wahab said. “I do whatever I can do to try to win. Whether it’s to block shots, rebound or score … I just have to do it.”

St. John’s (5-3, 0-2) jumped out on a 15-4 run after halftime to recapture the lead. However, it did not phase the Hoyas, who managed to find their footing late into the game. Freshman guard T.J. Berger drilled a 3-pointer to tie the game at 60 with more than 10 minutes remaining.

Their comeback was anchored by the rest of the starters, Carey, Jahvon Blair and Dante Harris. All three scored into the double figures and combined for 61 points. Harris, a guard from the District, led all scorers with 22 points while Blair added 20 points and 5 assists.

Yet, Georgetown also had no answers for junior Isaih Moore, whose double-double performance of 26 points and 14 rebounds kept St. John’s in the game. The Hoyas surrendered the lead and looked poised to lose by double-digits as the Red Storm had an eight-point advantage late in the game.

However, the Hoya starters reemerged again as Blair fired off a 3-pointer and Carey scored a breakaway layup to give the Hoyas an 88-86 lead with 26 seconds remaining. Greg Williams Jr. scored a last-second shot to tie the game at 88 to go to overtime.

“I’m proud of the guys that came off the bench,” Carey said. “Dante got the start, and I’m just proud of how [the other freshmen] produced and gave us a spark.”

Georgetown’s momentum swings helped them tremendously as they went on an 8-1 run to start overtime, mainly on their free-throw shooting. The Hoyas finished the game 18 of 24 shooting or 75% percent behind the charity stripe, whereas their opponents struggled, going 24 of 33 in free throws.

St. John’s deliberately missed a free throw and collected the ensuing rebound to attempt a game-tying shot. However, Wahab’s outstretched hand blocked the shot, and Harris collected the loose ball for the turnover.

After being fouled and put on the free-throw line, Harris had no problems scoring one of two attempts in the dying seconds to solidify Georgetown’s win.

Heading to New York, the Hoyas will need to focus on improving their defense. While Wahab had an outstanding game, Georgetown still allowed 50 points in the paint and caused seven lead changes. The Hoyas will be well-rested with no games in between encounters but will need to come out with the same fighting intensity that earned them the overtime victory in D.C.

“We made so many mistakes to let them tie the game [but] we didn’t put our head down,” Ewing said. “Coming into overtime, they went out, but we still kept our composure, kept fighting. We kept our composure. We could have easily let go of the rope when we went down eight points at the end of the game.”