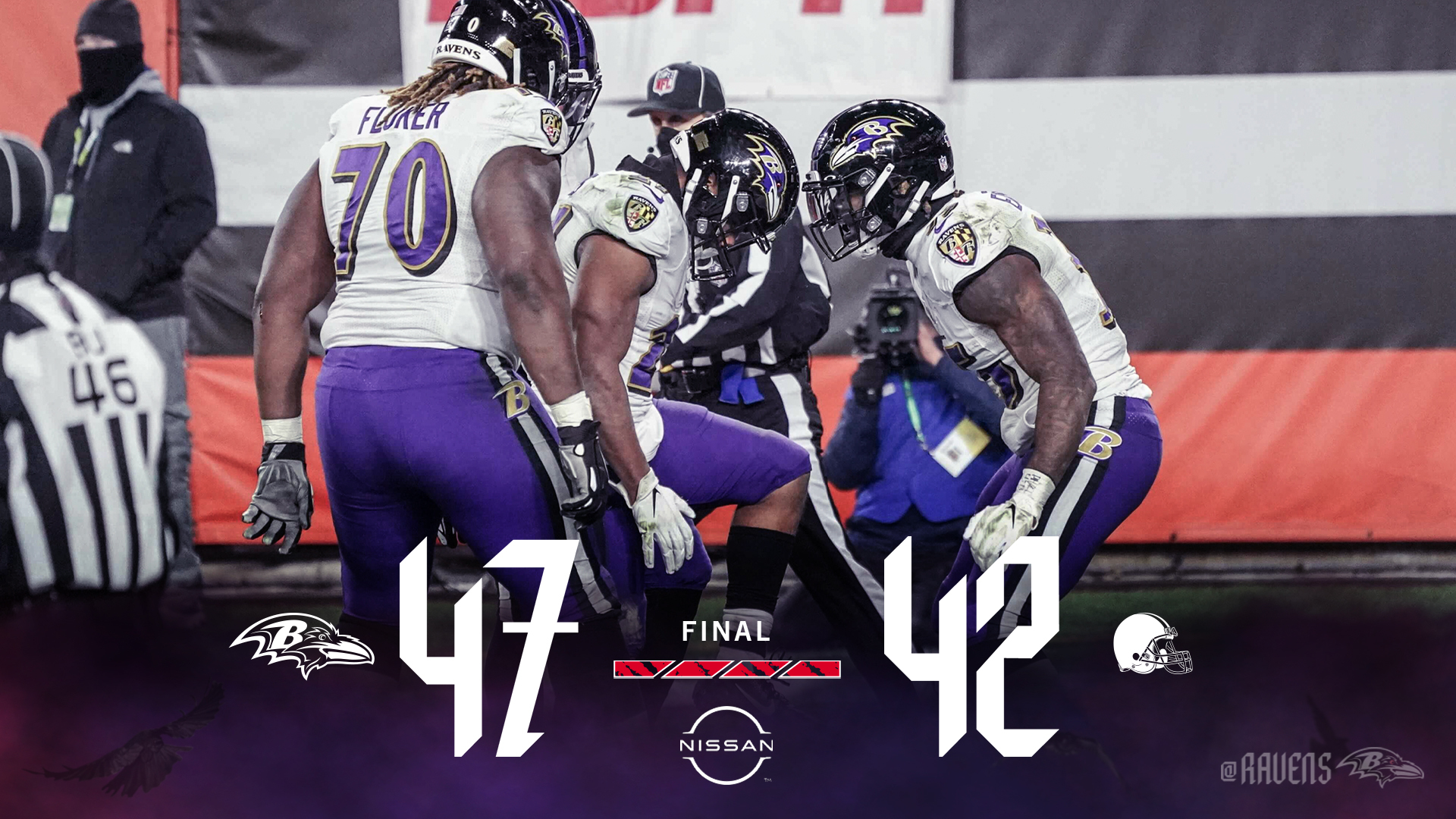 For Baltimore, a fourth-quarter exit accompanied by an eventual return by quarterback Lamar Jackson and a game-winning 55-yard field goal by Justin Tucker highlighted the Ravens’ 47-42 road win over the Browns.

“It’s a game that’s going to go down in history,” said Baltimore Ravens Head Coach John Harbaugh. “I love these guys for who they are. They have the heart of lions.”

Enough heart yielded Baltimore to victory, despite their playoff hopes appearing to be in jeopardy in the fourth quarter.

Although they entered the quarter leading 34-20, the team’s fate was placed in the hands of backup quarterback Trace McSorley after Jackson was forced into the locker room after he was dealing with cramps.

The Browns took advantage of the physical blow to Jackson, shifting the momentum in their favor by scoring a pair of touchdowns and converting a 2-point opportunity to take a 35-34 lead with just over six minutes of regulation left.

For Baltimore, who was trailing in the game and relying on their backup, kept their hopes alive as McSorley and the Ravens running backs corps leading the team into Cleveland territory.

On a 3rd and 2 situation with just over two minutes left, McSorley decided to run the ball, but a streaking Myles Garrett forced the backup quarterback to the ground with an injured knee on the play.

The injury forced McSorley out of the game but paved the way for a heroic Jackson return.

“I was still coming out no matter what,” Jackson said after the game. “It was crunch time. It’s win or go home for us right now. We had got to keep it going.

Jackson returned to the field on a fourth down situation but went for it, scrambling and finding Marquise Brown for a 44-yard touchdown connection. Baltimore successfully executed a two-point conversion on a rushing attempt by J.K. Dobbins to extend the lead to 42-35.

Cleveland, who needed a touchdown, responded in just 47 seconds to tie the game, leaving a minute left on the clock, which served as just enough of a window of time for Baltimore.

Jackson, who appeared fully recovered from his cramps experienced minutes earlier, drove Baltimore into field goal territory for Tucker to perform the game-deciding kick against the division rivals.

The Ravens added two final points onto the scoreboard, forcing a safety during the Browns’ frantic last hope play as time expired.

For both teams, the attack on the ground dominated the scoring, as both the Ravens and Browns combined for nine rushing touchdowns. Each team contributed at least four of those rushing touchdowns, marking an unprecedented moment in an NFL game.

All five of Baltimore’s touchdowns on the ground came in the first three quarters, courtesy of Jackson, as well as running backs Gus Edwards and Dobbins.

Jackson led the way with 124 yards on the ground, setting a record for most rushing yards by a quarterback on Monday Night Football. Dobbins and Edwards combined for an additional 102 yards.

Jackson managed to complete 11-of-17 passes for 163 passing yards and benefited from the return of tight end Mark Andrews, who had not played since Nov. 22 after dealing with COVID-19 symptoms.

In his return, Andrews led the Ravens receiving unit with 78 yards. Brown, who caught the decisive touchdown in the fourth quarter, has reached the end zone for the third consecutive week, which is a milestone yet to be achieved by a Ravens receiver since 2003.

For both teams, Monday’s matchup contrasted the Ravens-Browns game from Week 1 of the season on Sept. 13. That season opener was heavily dominated by Baltimore, resulting in a remarkable 38-6 victory for the Ravens.

In the three months since that one-sided matchup, the Browns had turned a switch, which included a stretch of four-straight wins before the Monday night game against Baltimore.

The Ravens, on the other hand, had dealt with a COVID-19 outbreak, rescheduled games, and sporadic practice routines as hurdles to overcome during the season.

According to FiveThirtyEight, Baltimore had a 62% chance of reaching the playoffs before Monday’s game, trailing the Browns and Pittsburgh Steelers in the standings. After the win, the Ravens’ playoff odds shot up to 88% as they look ahead at a favorable schedule in the upcoming weeks.

Despite short rest for the third consecutive week, the Ravens will return to their original schedule of playing on Sundays as they take on the Jacksonville Jaguars at home at 1 p.m. ET. The Jaguars are 1-12, losing 12 straight games this year.