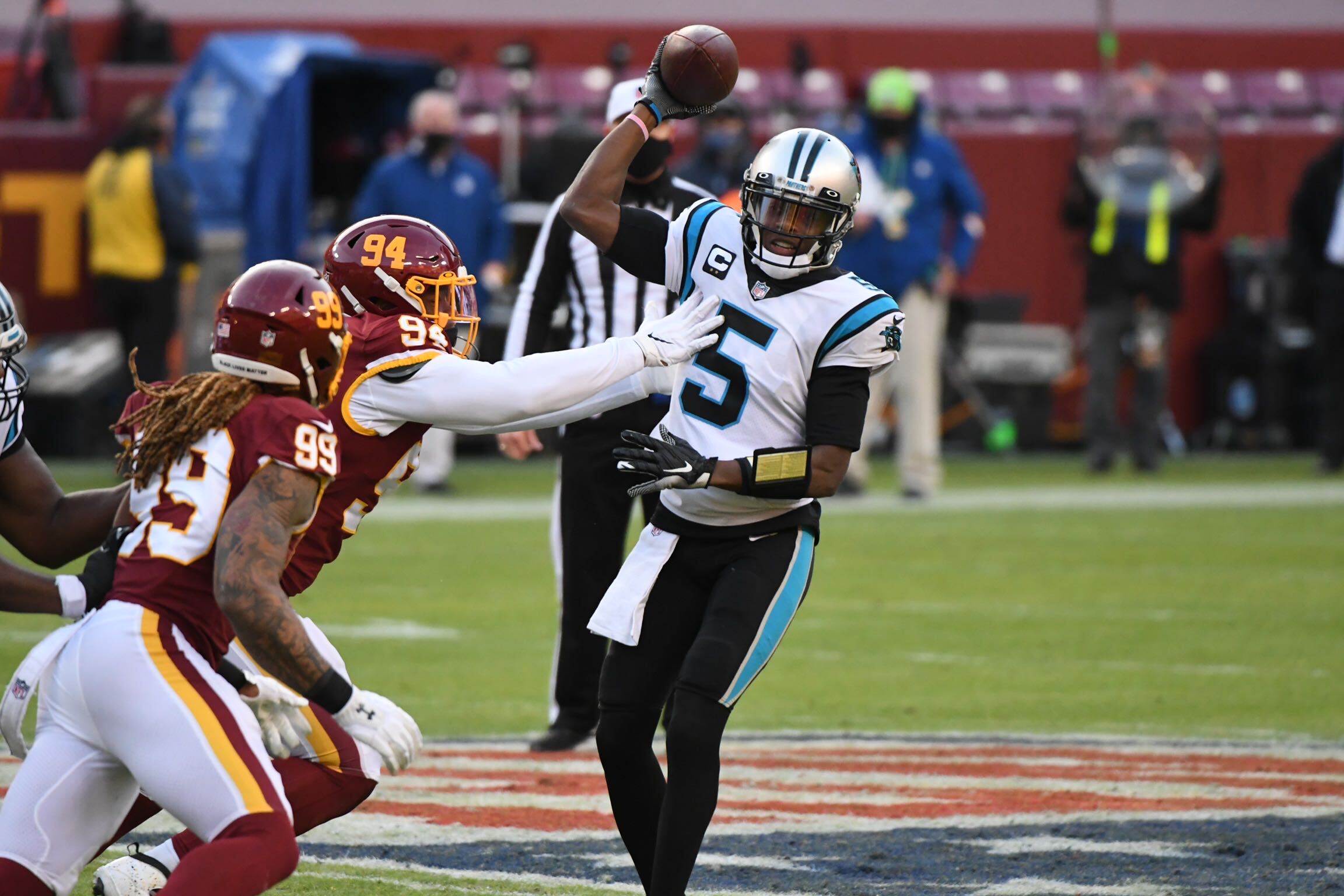 LANDOVER — The Washington Football Team had a chance to clinch the NFC East crown with a home win against the Carolina Panthers right after the New York Giants’ loss to the Baltimore Ravens on Sunday.

However, Washington quarterback Dwayne Haskins’ struggles, a couple of miscues by the refs, and special teams blunders proved costly as the Panthers left FedExField with a shocking 20-13 victory.

On the Burgundy and Gold’s second drive of the afternoon, Haskins attempted a pass, but Carolina defensive end Marquis Haynes knocked the ball loose from Haskins. At the same time, linebacker Jermaine Carter recovered the ball.

Later in the first quarter, Washington wide receiver Steven Sims Jr. attempted to field a punt, but he muffed the ball as it then rolled into the end zone and Panthers wide receiver Brandon Zylstra recovered it in the end zone for the special teams touchdown, but the missed extra point kept the score at 6-0.

In the second quarter, the Carolina offense drove 80 yards down the field on 10 plays, resulting in a 1-yard rushing touchdown from running back Mike Davis, extending the lead to 13-0.

On Washington’s ensuing drive, Haskins continued to struggle as he threw his first interception of the afternoon to Panthers linebacker Tahir Whitehead.

Carolina capitalized on the turnover as quarterback Teddy Bridgewater connected with wide receiver Robby Anderson for the 14-yard touchdown to extend the shutout lead to 20-0.

After Washington kicker Dustin Hopkins made a 48-yard field goal to cut the deficit to 20-3, Washington’s stellar defense stepped up when defensive end Chase Young forced a throw from Bridgewater to be intercepted by safety Kamren Curl.

However, as Haskins attempted to score on the next drive, he threw his second interception of the day, this time to Carolina safety Tre Boston, towards the end of the half.

In the third quarter, Young continued to prove his case for NFL Defensive Rookie of the Year when he stripped the ball from Bridgewater and recovered it, later resulting in a 26-yard field goal from Hopkins.

Haskins was benched late in the fourth quarter after a turnover on downs, and since both Smith and Kyle Allen were injured, practice squad quarterback Taylor Heinicke entered the game.

Heinicke showcased his mobility and playmaking abilities on a 16-play, 70-yard drive, which could’ve resulted in a 12-yard touchdown pass to tight end Logan Thomas. However, it was called back due to a holding penalty, and instead, the final play was an incomplete pass.

Heinicke did look sharp on his next drive as he fired a 29-yard passing touchdown to running back J.D. McKissic, cutting the deficit to 20-13 with under two minutes remaining. However, the Panthers recovered the onside kick, sealing it.

“I thought it was gutsy,” said Rivera. “He took advantage of what they were doing in terms of playing soft, allowing him to hit certain throws.”

Now sitting at 6-9, the Washington Football Team will need to beat the Philadelphia Eagles this Sunday to clinch the NFC East, but a loss eliminates them from playoff contention.

Farewell to the Former First-Round Pick

The Washington Football Team announced today that Haskins had been released from the team.

During his tenure in Washington, the former first-round pick threw for 2,804 yards, 12 touchdowns, and 14 interceptions.