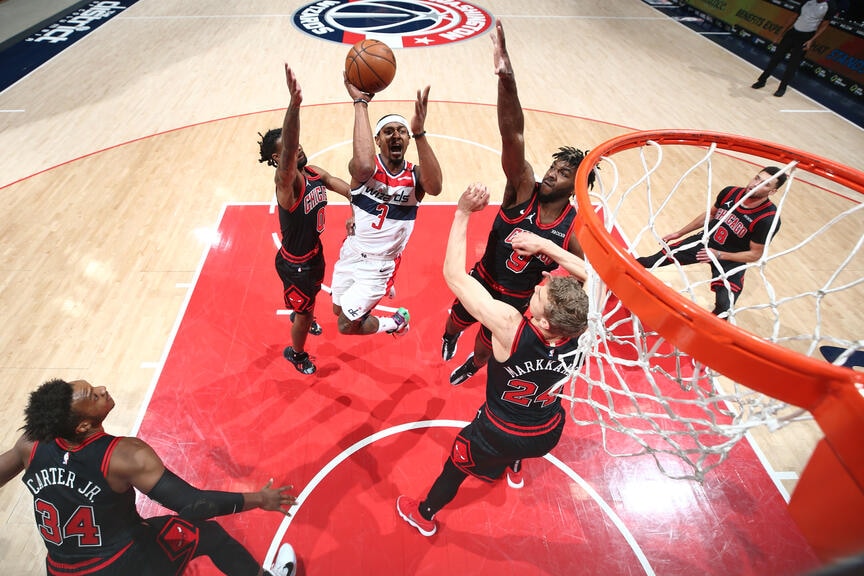 WASHINGTON – The Washington Wizards are still searching for their first win of the season, falling to the Chicago Bulls 115-107, Tuesday in their second to last contest of their four-game homestand.

“Still working out some things,” Washington Wizards Head Coach Scott Brooks said, “But I thought we played harder, there [were] possessions we could’ve played better. There’s a difference between playing hard and playing better. We have to play better, and we will.”

This time around, the Wizards’ fourth loss of the year comes on the heels of poor shooting, turnovers, and a 3-point defense that allowed the Bulls to shoot at a 41.6% clip.

As the previous three did, the game started off as a track meet with pace and plenty of scoring. Just like the others, Chicago separated themselves, keeping Washington at bay with a strong defensive effort.

Tuesday was a bounce-back effort for Westbrook, who seemed to have a little bit more spring in his legs and was able to hit more of his shots consistently.

“This guys a winning basketball player for … 13 years, I’ve been with him going on eight [years] now,” Brooks said about Westbrook. “A lot of people don’t like the competitive spirit that he brings and the tenacity and competitive drive; they wanna nitpick on a 17-foot shot. What he’s done already, we haven’t won a game, but he’s teaching these young players how important it is, our job is, and that’s priceless.”

Davis Bertans contributed 20 points and Deni Avdija accounted for 13 points and 6 rebounds to round out the Wizards double-figure scoring.

Bulls guard Zach Lavine (team-high 23 points, 5 rebounds, 6 assists) knocked down a 3-pointer at the top of the arc to give the Bulls a 21-18 lead in the first quarter but were unable to sustain momentum, allowing the Wizards to take a 3-point lead after Bertans converted his free throws.

Just like moments ago, however, both teams went on a scoring drought. After Colby White (18 points) scored on a layup, the action would pick up, followed by more back-and-forth scoring.

An 8-0 run fueled by back-to-back 3-pointers by Lavine and former Georgetown University product Otto Porter Jr. (16 points) gave Chicago an eight-point lead before Westbrook stopped the bleeding with free throws right before the half.

In the second half, the Bulls asserted their will, creating and maintaining double-digit leads behind Lavine’s scoring spurt, who scored 9 points in the third quarter.

Once again, the Wizards were unable to respond, going through another lengthy scoring drought until Beal scored in transition off a Westbrook assist.

The Bulls put the first nails in the coffin as their lead ballooned, opening the final frame with a quick 9-0 run and 92-73 lead over the Wizards.

Down 19, suddenly the Wizards fought to cut the deficit, outscoring the Bulls 34-32. Try as they might, the Wizards weren’t able to cut the margin to single digits until there was 1:06 left on the clock after Beal knocked down a 21-foot jumper.

The Wizards can say they got as close as eight, but the team appears dejected.

Westbrook was caught on camera stewing after the loss, but assistant coach Robert Pack came over to offer some words. There was a lengthy wait between Brooks and players speaking to the media. Bradley Beal skipped his Zoom session with the media, a rare occurrence.

It’s early in the season, but with frustration being so palpable, it’s obvious something needs to change.