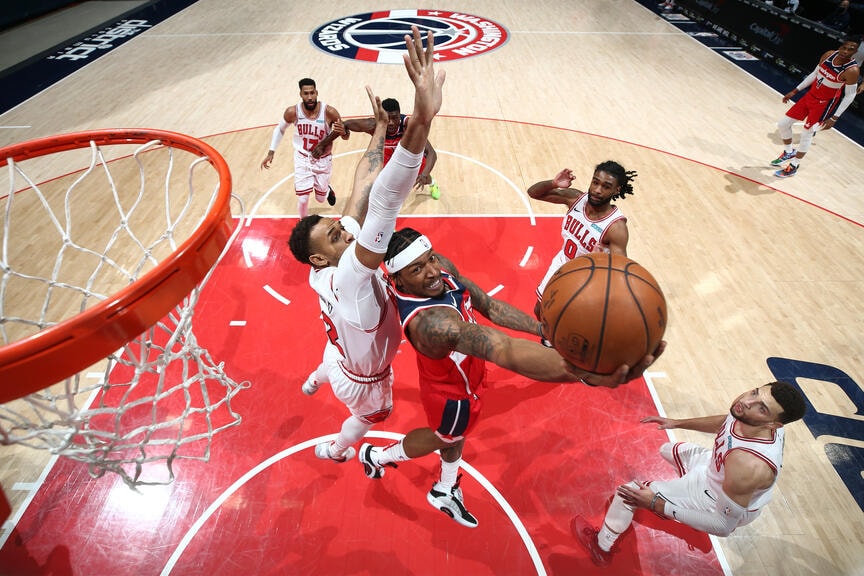 WASHINGTON – The Washington Wizards lost their fifth-straight game to open the season, losing twice to the Chicago Bulls, 133-130, despite 28 points apiece from Thomas Bryant and Bradley Beal and a triple-double from Russell Westbrook (22 points, 10 rebounds, 11 assists).

Former Wizard Otto Porter Jr. led the Bulls with 28 points and 12 rebounds, followed up by Zach Lavine and his 22 points, six rebounds, and 7 assists.

Despite the return of Rui Hachimura (17 points, 5 rebounds), who missed the first four games of the season due to an eye injury, the Wizards were unable to bring in 2021 with a win.

With his return Thursday, Hachimura provided plenty of physicality and shooting ability. The Gonzaga product helped funnel opponents toward Thomas Bryant (3 blocks, 3 rebounds), defend the paint, and make life difficult at the rim.

Even with the fully available roster at hand, the tactic of simply outscoring opponents instead of relying on defense persisted.

The Wizards built a nine-point lead over the Bulls early in the first half, relying on a 12-3 run supplied by a Bryant 3-pointer and Deni Avdija layup. The defense held up despite Chicago making it a one-point game off a Daniel Gafford putback slam.

The Wizards defense struggled in the second quarter, allowing the Bulls to outscore them 36-27 in the second quarter, grabbing momentum late and a 65-61 late in the half off back-to-back 3-pointers from Colby White (16 points, 10 assists). Still, Bryant responded just a few moments later, taking back control after completing a 3-point play.

After the half was where Washington’s leaky defense is usually exposed the most, Chicago knew that and acted accordingly, opening up the evening’s biggest lead, 107-97.

The combination of Wendell Carter, Jr., White, and Thaddeus Young inflicted the most damage, combining to score 19 points in the third quarter, which contributed the most to the double-digit lead.

Action in the final frame was back and forth as Washington fought back into the game. Mortiz Wagner, replacing Bryant for seven minutes in the fourth quarter in his first action all season, and Raul Neto both played a huge part.

In fact, they aided a 10-0 run and back-to-back 3-pointers from the diminutive point that gave the Wizards a 123-118 with just five minutes to go in the contest.

The final 95 seconds was a tight affair when Lavine knocked down a 17-foot jumper, Westbrook countered with his own identical shot, giving the Wizards a 128-127 lead with 1:17 seconds remaining.

Chicago retook the lead just moments later when White sank a pair of free throws. With 14 seconds remaining, down by just one point, Beal had the chance to break the Bulls.

However, that’s all it was, just a chance.

Beal passed it to Bryant, who gave it back to a cutting Beal, and the superstar two-guard took a dribble, gathered, and somehow inexplicably lost the ball while rising for the layup.

The two teams exchanged free throw trips, and after that, Lavine converted his last two tries at the line.

The Wizards had one more opportunity at the opposite baseline to win the game, but without any timeouts. Hachimura didn’t make too many mistakes Thursday.

Still, with the game on the line, the second-year forward turned the ball over on a hail mary shot with the ball sailing over its intended target and sent the Wizards further spiraling down a tumultuous 2020-2021 season.

“It was a home run play,” Hachimura said. “We didn’t have a timeout, so I was just going to throw the pass to (Bryant), and, yeah, it just didn’t go through.”