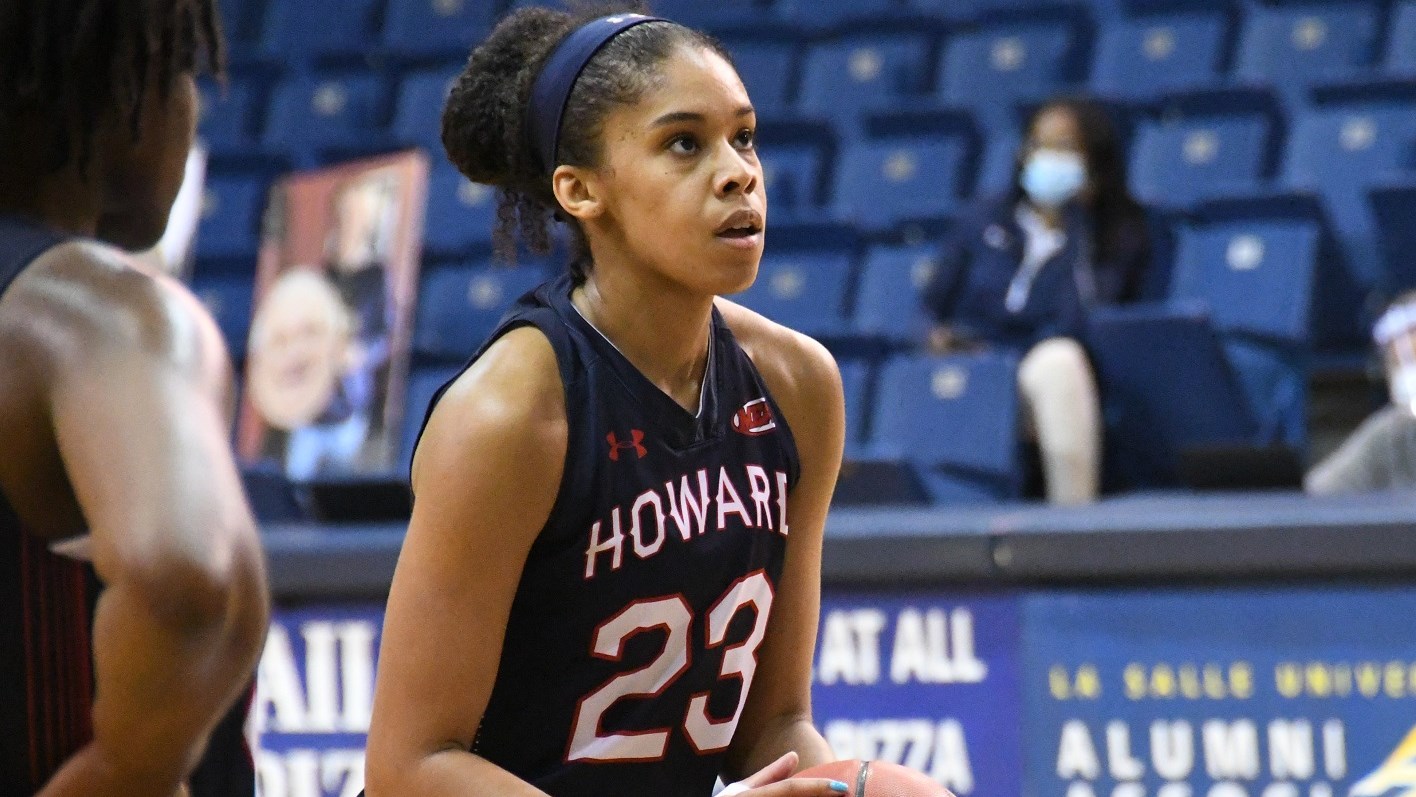 The dominant performance began on defense, holding the Lady Bears just over 24-percent (17-of-70), including 9-percent (2-of-22) from downtown.

“They missed a lot of shots today,” said Howard Women’s Basketball head coach Ty Grace after today’s win. “We knew that they were really good getting to the rim, so we wanted to limit those opportunities. We did a good job containing them.”

“I am taking what the defense gives me,” Thornton stated after another outstanding performance. “I am trying to stay involve in the offense, even if I am not scoring. I just try to find ways to get better.”

Dahynye Redd put the Lady Bears ahead early, 3-4, but HU would take control and never relinquish.

Despite taking a five-point advantage after one, 18-13, Howard was dealing with foul trouble going into the half. Making their season debuts, juniors Gia Thorpe (Pittsburgh) and Krislyn Marsh (Houston) provided stability leading into intermission.

“It was good to have Gia and Krislyn back,” Grace expressed. “For us having balance and experience coming off the bench was great. It was good comeback performances for both.”

Howard held a double-digit halftime lead, 36-23, but Morgan State outscored HU in the third, 15-18, and sliced the margin down to 10 points, 51-41, but the Bison would make a statement in the fourth.

HU shot 50-percent (6-of-12) from the floor while holding the Lady Bears to only one made bucket in the fourth. Howard dominated Morgan State, outscoring MSU, 22-7, in the quarter.

Howard led nearly from start-to-finish, thanks to their aggressive attack at the rim. Collectively, the Bison shot over 72-percent (26-of-36) at the foul line.

“We have a lot of threats on this team,” Thornton commented. “Teams focusing on me allows my teammates to go off. I have great teammates and they help me.”

Howard University women’s basketball team committed a season-high 31 turnovers in the 58-71 loss at Morgan State (MSU) inside the Hill Field House. With the setback, HU fell to 5-2 (1-1 MEAC) on the season on Jan. 3.

Contrast to yesterday, MSU controlled the tempo with full court pressure; thus, forcing HU into mistakes that led to 35 points off turnovers.

“They turned up their pressure a little more today,” said Howard Women’s Basketball head coach Ty Grace after the game. “They got in our faces and disrupted us offensively. They did a good job speeding the game up and being way more active than yesterday.”

Offensively, the Bison were unable to get into rhythm, shooting just under 39-percent (17-of-44), including 8-percent (1-of-12) from long range.

Second-year point guard Iyanna Warren (Accokeek, Md.) led the way despite the team’s shooting woes, tying a career-best 18 points on 7-of-9 shooting before fouling out.

“She shot great today,” said Grace on her sophomore floor general. “But others were not scoring today. So, when you’re trying to create for others, you’re bound to make turnovers. She tried to put us on her back, but we need balance scoring.”

Sophomore forward Makayla Minett (Chicago) put HU ahead by three after a put back layup, 11-8, but the Lady Bears would respond with a 9-0 run to close out the first frame, 11-17.

Morgan State’s momentum continued after intermission, shooting 67-percent (6-of-9) from the field and 86-percent (12-of-14) at the foul line in the third to take a commanding lead into the fourth, 39-56.

HU outscored the Lady Bears in the fourth, 19-14, but the comeback would fall short.

“One person is not going to carry the team,” Grace continued. “Even when Jayla scores 20, we have others contributing and being involved.”

Senior guard Jayla Thornton (Newark, N.J.), who leads the MEAC in scoring, finished the afternoon with zero points on 0-of-5 shooting in 23 minutes of action.

“It’s about preparation,” Grace on playing back-to-back days. “When you have these small windows in between games, you don’t have a lot of time in making adjustments. It comes down to preparation, mental focus and rest.”

On Jan. 16-17, Howard meets Coppin State in a two-game series at The Burr. Both games are scheduled for 2 p.m.