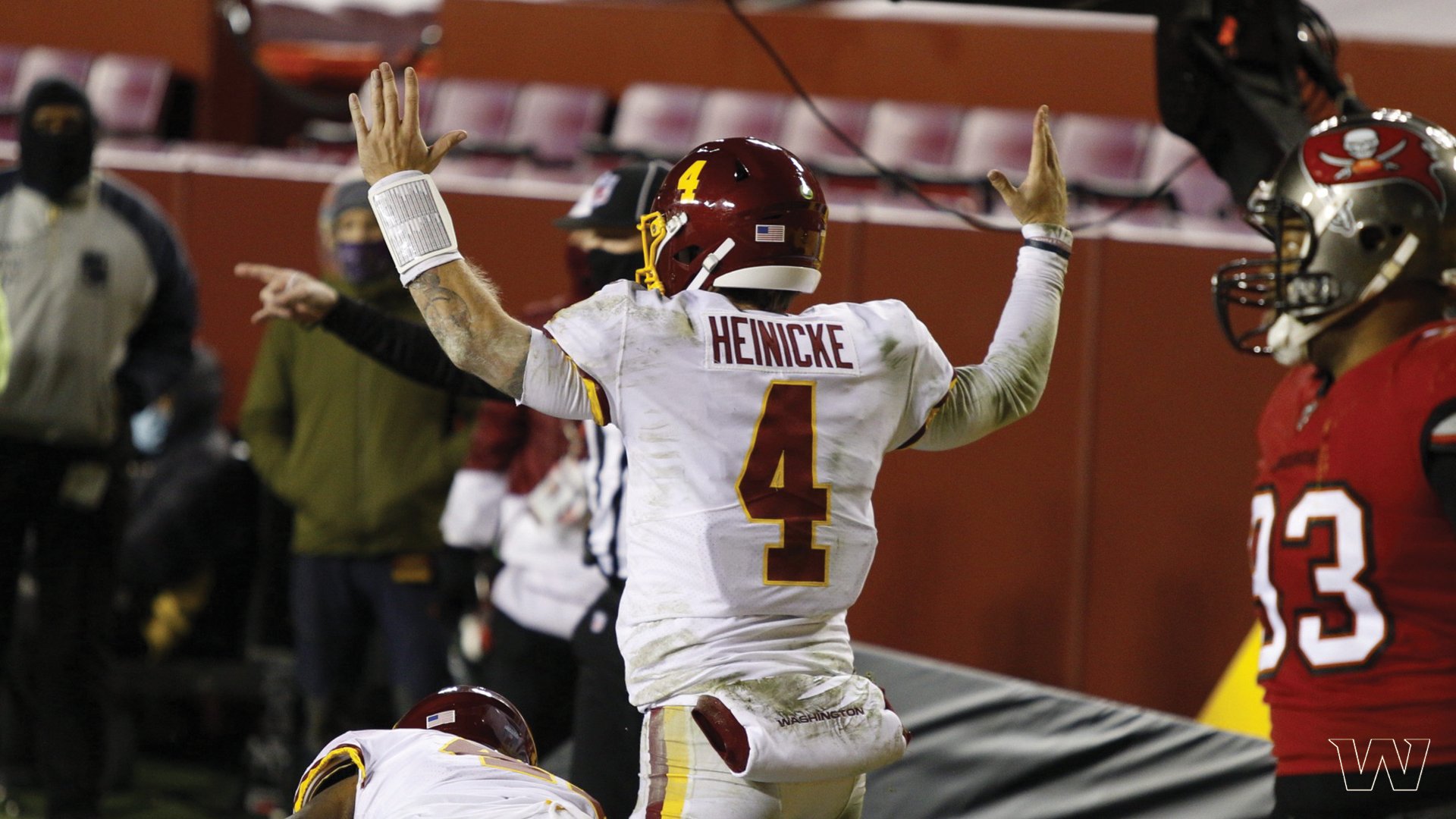 Heinicke made quite the impression with his incredible performance, but veteran quarterback Tom Brady proved too much for Washington as the Buccaneers escaped FedExField with a 31-23 victory.

“Looking back on the game in the next couple days, it’s going to be something that I’m proud about,” said Heinicke. “I’m happy that coach believed in me and gave me that opportunity.”

The Bucs capitalized on the turnover with a 6-play, 58-yard drive, which resulted in Brady connecting with wide receiver Antonio Brown for a 36-yard touchdown, but a blocked extra point attempt kept the score at 9-0.

Washington then responded with a 10-play, 75-yard drive, where Heinicke continued to show off his mobility and electric playmaking abilities with a series of passes. The drive concluded with a 2-yard rushing touchdown by running back J.D. McKissic to cut the deficit to 9-7.

However, Tampa Bay’s offense struck once again on their ensuing 5-play, 61-yard drive, as Brady found Chris Godwin for the 27-yard touchdown pass, but the team missed the 2-point conversion, keeping the score at 15-7 early in the first half.

Later in the half, the Bucs drove 82 yards downfield and looked to score another touchdown, but the Burgundy and Gold defense held them to a 23-yard field goal from Ryan Succop, with the score 18-7 at halftime.

Washington opened the second half with a 7-play, 52-yard drive, where Heinicke made some more smart throws, while kicker Dustin Hopkins nailed a 36-yard field goal to cut the deficit to 18-10.

In the middle of the third, the momentum seemed to swing in Washington’s favor when Kamren Curl and Da’Ron Payne knocked the ball loose from Ke’Shawn Vaughn, and Jon Bostic recovered the fumble.

The Burgundy and Gold capitalized on the fumble recovery as Heinicke made a miraculous play, where he escaped pressure, ran, and made a dive for the pylon to score an incredible 8-yard touchdown.

However, the 2-point conversion was unsuccessful, leaving the score at 18-16.

“It was gutsy,” said Washington Football Team Head Coach Ron Rivera of Heinicke’s performance. “He’s creating an opportunity for himself, and we’ll see what happens.”

Tampa Bay later added a 38-yard field goal from Succop and then a 3-yard touchdown run by Leonard Fournette that capped off a 7-play, 69-yard drive to extend the lead to 28-16.

Heinicke once again stepped up on an 11-play, 75-yard drive, which ended with the reserve quarterback finding Steven Sims Jr. in the corner of the end zone for an 11-yard score, cutting the Buccaneers’ lead to five, 28-23.

After Tampa Bay added another field goal, Heinicke attempted a late game-tying drive, but on 4th and 21, his deep pass was incomplete, sealing the game for Tampa Bay.

Heinicke was the real highlight in the loss, passing for 306 yards and 1 touchdown on 26-of-44 of his throws while also rushing for 46 yards and a score.

Sims was also the Burgundy and Gold’s leading receiver, as he made 7 catches for 104 yards.

While the season may be over, the Washington Football Team certainly has a bright future, with Heinicke as the possible franchise quarterback and Rivera being the head coach. However, time will tell.