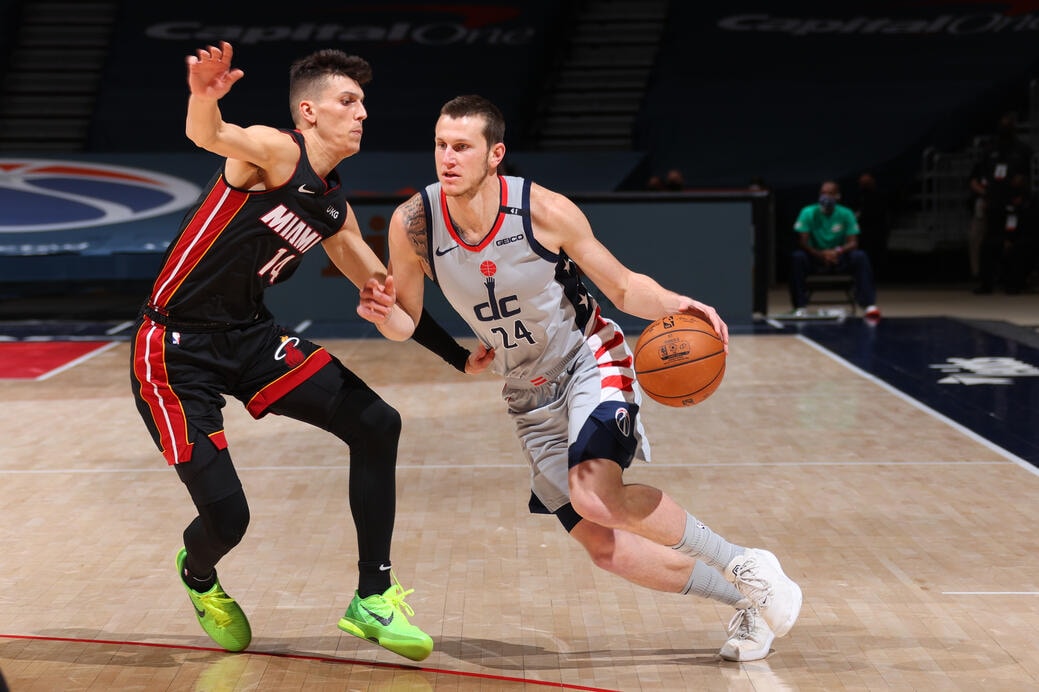 WASHINGTON – Shorthanded due to injuries and contract tracing, the Washington Wizards could not stop the Miami Heat, losing 128-124 Saturday night.

Washington (2-8) performed admirably against last season’s Eastern Conference Champions without Bradley Beal and Russell Westbrook. Beal sat out for contact tracing concerns after Boston Celtics star Jayson Tatum tested positive for COVID-19 a day after playing against the Wizards. Westbrook was out due to soreness in his left quad.

Head coach Scott Brooks said he found out an hour before tip-off about Beal’s removal. While it surprised him, Brooks said players not being available due to COVID-19 is expected to happen.

“You hate for it to happen, we hope for the best, but I don’t know the next step [going forward],” Brooks said.

The Wizards’ horrible luck continued to drop early in the first quarter as center Thomas Bryant left the game with a knee injury, later confirmed to be an ACL tear. Bryant was averaging a career-high 15.9 points per game.

Yet, the Wizards battled Miami. The bench, a source of inconsistent play so far this season, scored 38 points in the first half, outscoring the starters by five points. Garrison Matthews and Robin Lopez scored 11 points apiece in the first half.

Matthews, playing meaningful minutes for the second straight game, scored a team-high 22 points. With Beal’s absence and Bryant’s long-term injury, Matthews will need to step into games and become a frequent contributor on offense.

“My job is to play hard; it’s as simple as that,” Matthews said. “It’s to go in there and play as hard as I can – my shots are going to fall, sometimes they are, sometimes they won’t. One thing I can control is how hard I play, and that’s one thing I won’t let get away from me.”

While the game remained close throughout, veteran point guard Ish Smith led Washington a 10-3 run with his midrange jumper gave them their first lead, 60-58, last in the second quarter. Miami regained control late and entered halftime with a 75-71 advantage.

The second half was a different story. After Rui Hachimura (17 points) converted a layup to make it a six-point game, the Heat fired into an 11-0 run midway through the third quarter. A Precious Achiuwa alley-oop capped off the run to make it 97-80.

The Heat’s lead grew up to 24 points in the fourth quarter after a 7-0 spurt, with a Tyler Herro layup ending the run. Herro finished with a game-high 31 points and collected nine rebounds.

Washington responded with an 18-0 run, spearheaded by four 3-pointers that cut the lead to single digits with just over seven minutes left.

“I think a lot of guys stepped up,” Lopez said, “I love seeing the aggressiveness out of a lot of guys. For the majority of the game, we didn’t hesitate on offense. We kept the ball moving; when we saw our opportunity, guys took it.”

The Heat build its lead back up by 13 points with over four minutes to go after a turnaround hook shot from Bam Adebayo (18 points). Rookie Deni Avdija (20 points) scored nine unanswered points, including a step-back 3-pointer, to bring Washington within single digits.

However, missed shots down the stretch stopped Washington’s comeback efforts. Ten games into their season, the Wizards have yet to solve their defensive problems and, with players missing, will need to find other ways to outscore their opponents.

“We battled back and made it an interesting game at the end, but couldn’t score in that third quarter,” Brooks said. “Our guys have had a tough night. We still battled and played one of the best teams down to the wire.”