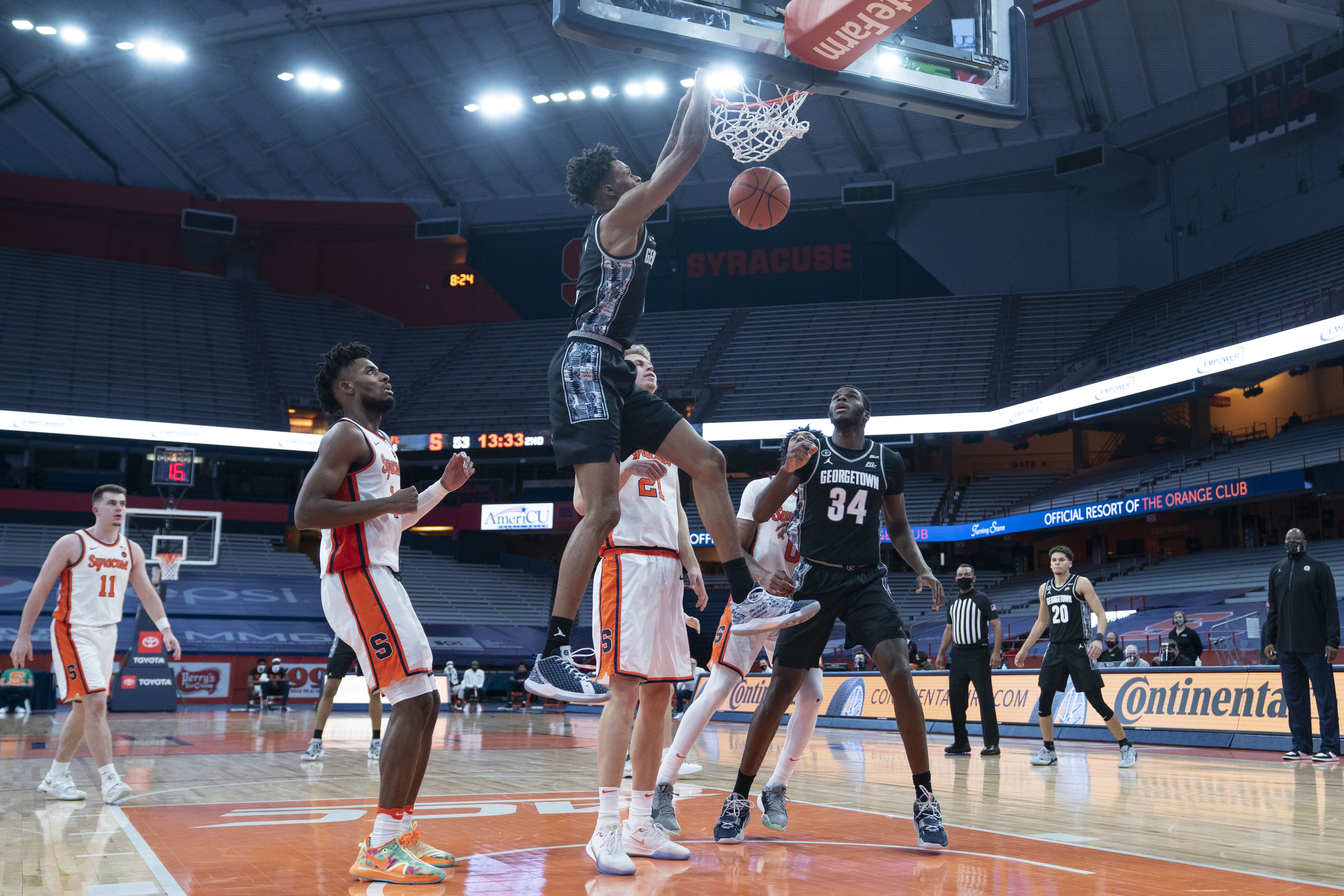 WASHINGTON – A late rally to make it a one-possession game in the dying moments of the second half was not enough for Georgetown as Syracuse earned the 74-69 win Saturday night.

The result is devastating the Hoyas (3-8, 1-5) as it marks their fifth straight loss of the season. What made the outcome worse was losing to their longtime rivals in their 96th matchup. Head coach Patrick Ewing, who played several rivalry matchups in the 80s, said an element was missing in this year’s game.

Georgetown started strong with a pair of dunks from sophomore center Qudus Wahab, but the Orange (7-2, 1-1) responded with a 10-0 run.

Soon, the first half became a back-and-forth affair after Georgetown scored eight unanswered points. Both teams traded shots until the midway point as Syracuse sophomore guard Joseph Girard III fired off a 3-pointer, which would be a start of an 18-3 run. The home team ended the first half with a 43-30 lead, thanks to Girard’s 9 first-half points.

Syracuse would continue its dominance in the second half, with junior guard Buddy Boeheim (21 points) and Girard leading the way, increasing the Orange’s lead by 16 points.

However, a 3-pointer by freshman guard T.J. Berger sparked a 12-3 run for the Hoyas, with seniors Jamorko Pickett and Jahvon Blair adding to the effort. Pickett finished the night with 17 points, nine rebounds and three blocks, while Blair completed his first career double-double with 16 points and 10 assists.

With the deficit reduced to seven points with less than seven minutes remaining, Blair continued to energize Georgetown’s offense as he found Chudier Bile open for a 3-pointer.

However, Georgetown struggled to find the basket late, while Syracuse scored six of the game’s last seven points to secure the win. Ewing said he liked his team’s fight but missed shots, especially in the paint, hurt their comeback bid.

“We only had 20 paint points, but it’s a lot more than we have had in the past,” Ewing said. “We have to shore up our defense and make sure we rebound a lot better than we did.”

Georgetown will look to snap their losing streak at home Wednesday when they play hosts to DePaul. Tipoff is set for 8:30 p.m.