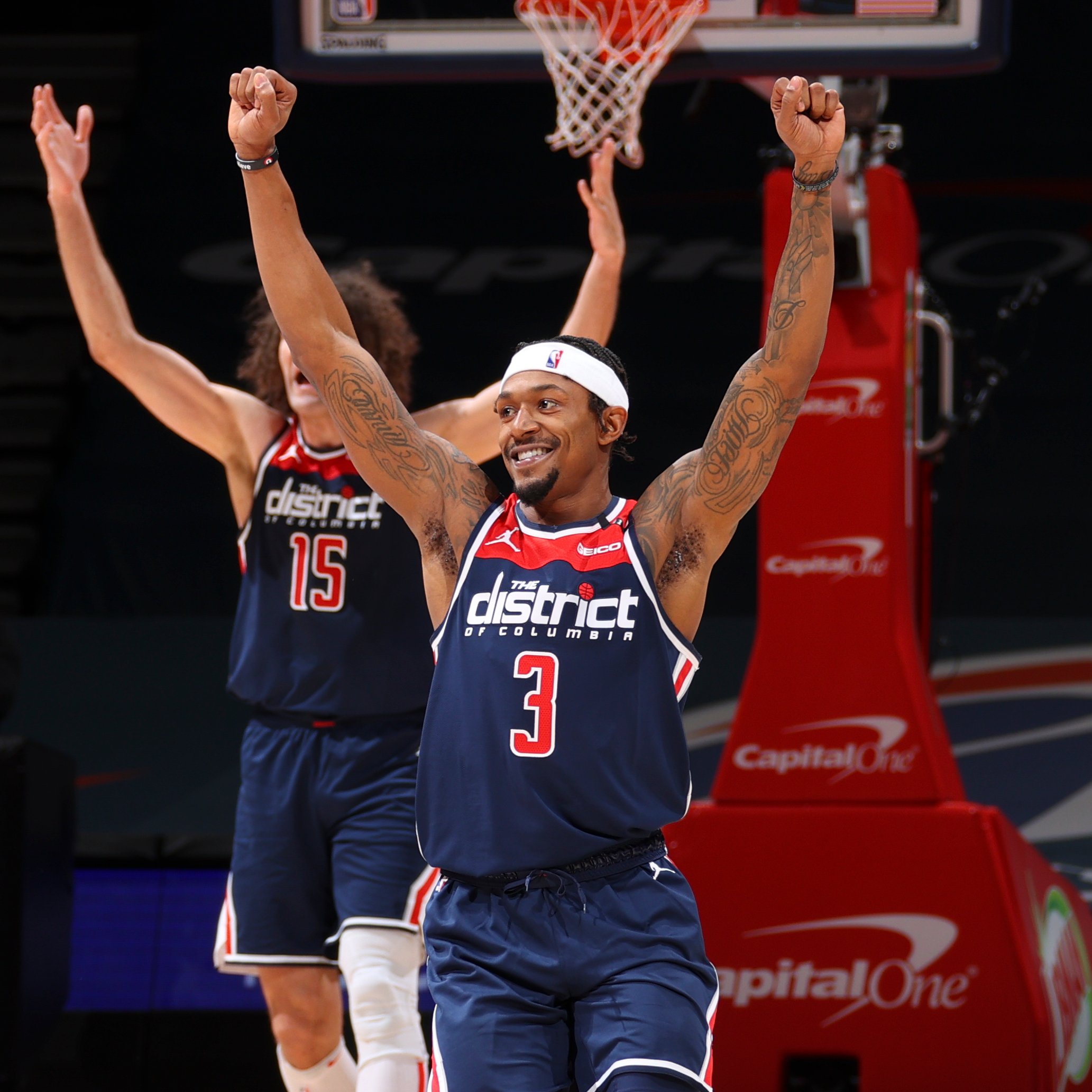 WASHINGTON – The Washington Wizards are finally back to their winning ways after defeating the Phoenix Suns, 128-107 on Jan. 11.

Bradley Beal nearly notched a triple-double, scoring a game-high 34 points, grabbed 8 rebounds, and handed out 9 nine assists after sitting out against the Miami Heat while in contact tracing protocol. Devin Booker led the Suns with a 33-point effort.

“We played with good energy,” Washington Wizards Head Coach Scott Brooks said. “We played like this in spurts, but I thought tonight we played throughout the game like this. Obviously our best, complete game of the season.”

In the shadow of last night’s contest was a showdown between Beal and Booker, arguably the two best two-guards in the association.

Head-to-head, Beal dominates the matchup 7-2, and Monday, the All-Stars wasted no time in exchanging buckets. Beal unfurled his deadly stepback pull-up jumpers and tough finishes at the rim. Booker countered with fadeaways, pull-ups, and layups.

While Booker had no issues scoring, the rest of his teammates did. The Wizards defense turned in a stellar performance, limiting the Suns to just 45.6% shooting from the field and held Phoenix to 14.6% from beyond the arc. For the first time this season, the Wizards were not only stringing defensive stops but played within their roles too.

“On all fronts, we had our hands full,” Beal said of the Suns and their multiple weapons on offense. “But I think we did a good job of defending. Tonight is the first time we guarded the right way. With intensity, with focus, with some IQ. So maybe we can move up from the parked cars now.”

It all started in the first half, leading by five points after Suns forward Cameron Johnson hit a 3-pointer with two minutes remaining. Washington immediately responded with a quarter spanning a 16-0 run, with the exclamation point being a Davis Bertans (18 points, 6-of-9 from range) 3-pointer that gave the Wizards a 36-19 lead in the second quarter.

That wasn’t the last the Suns heard of the “Latvian Laser,” who hit his first five 3-pointers in the second frame. His first miss came after hitting a triple over Johnson thanks to an offensive rebound that Robin Lopez (11 points, 11 rebounds) tapped out to Bertans that grew the deficit to 22 points with five minutes left in the half.

“That’s one of the best feelings you can have on the court as a shooter,” Bertans said. “Knocking down one, two, three, even more in a row, I kinda had that feeling that whatever you just (shoot) in that direction is going on.”

The good times would continue to roll as the Wizards built their lead, ballooning up to as much as 32 points after a layup from Deni Avdija made the score 91-62.

Just moments later, Beal provided perhaps the prettiest finish of the night with a reverse layup over Suns center Damian Jones. Despite being up by so much, Beal played into the fourth quarter. It was only just over four minutes, with Brooks joking that Beal can handle the workload.

The Suns never got closer than 21 after Chris Paul (14 points, 11 assists) hit a one-legged fadeaway deep in the paint. With the dominant win, Washington advanced to 3-8, and Beal won his matchup against Booker and notched another win.