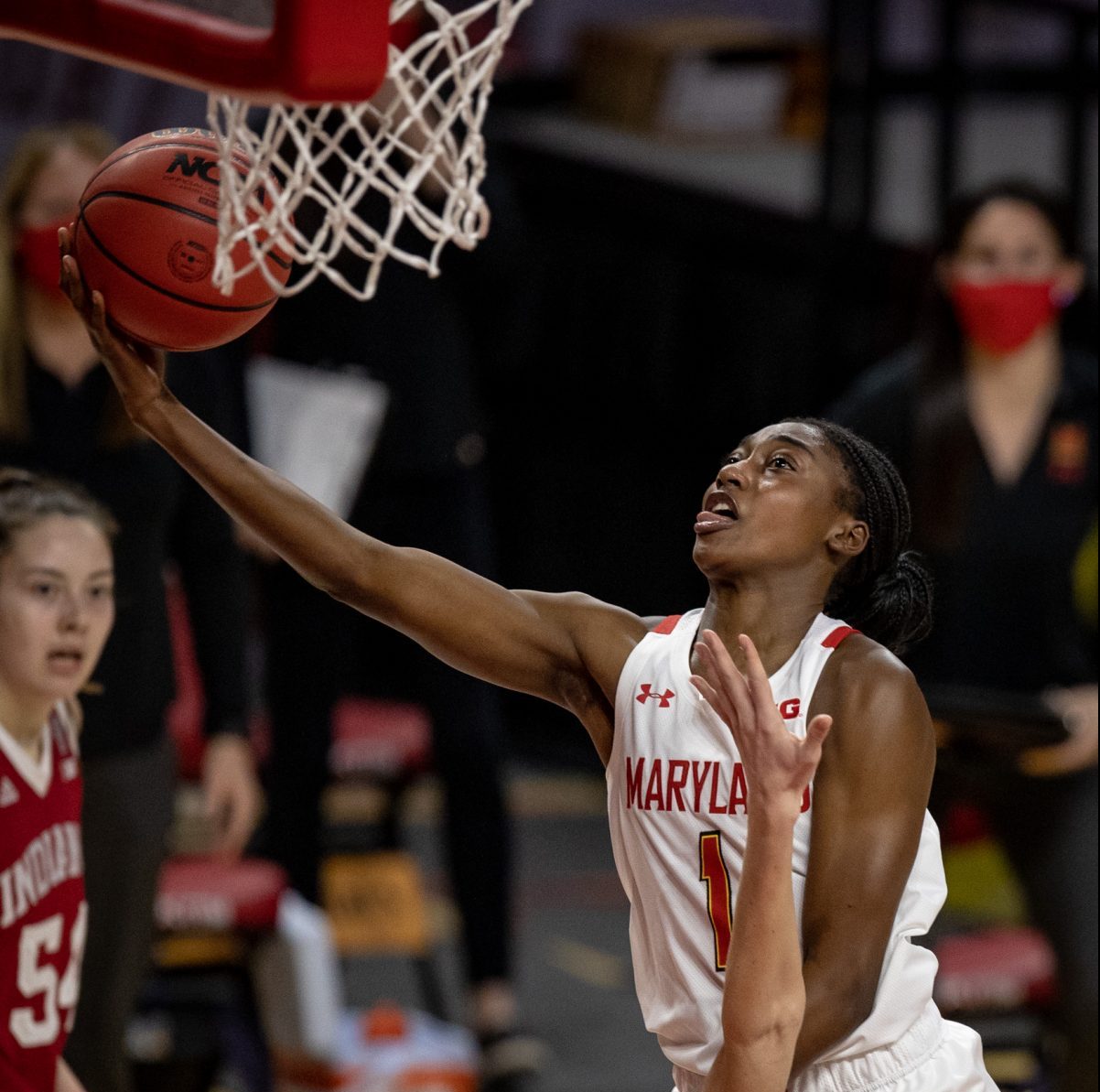 The Maryland women’s basketball team continues to excel while other local programs pause due to issues with the coronavirus.

Here is some key takeaway from local teams in the past week in college sports.

With the win, Maryland (10-1, 6-0) wins their ninth straight game and remain undefeated in Big Ten play. The result also comes after the Terrapins earned their first top 10 ranking in the AP poll this season.

After a slow start for Maryland, Bibby, a 6-foot-1 senior transfer from Mississippi State, fired off a pair of 3-pointers and a short jumper to give her teammates a spark. In the second quarter, she collected a steal and converted a layup to give the Terrapins a 7-point advantage heading into halftime.

After Maryland’s start in the first half, head coach Brenda Frese “got on” her players at halftime to improve their play, Bibby said.

“But that’s definitely what we needed,” Bibby said. “We’re a young team, and we’re still learning. If we do that against a top 10 team, we’re down by 20.”

The game remained close until the third quarter, where the Terrapins began to dominate.

Miller, a sophomore from Somerset, New Jersey, ran through the Minnesota defense with ease to score 7 points during a 10-0 run to open the second half. Katie Benzan (20 points) scored six 3-pointers, including one to end the third quarter to bump the Terrapins’ lead to 19 points.

Maryland’s lead grew as high as 27 points, bouncing back from the minor adversity created by their first-half performance. Going forward, Frese said, those performances could not happen again.

“We took accountability and decided to show up with our effort and intensity,” Frese said. “They were challenged at halftime, and I thought that was a terrific response, but it should not take us 20 minutes to get playing. I liked our response coming out of the locker room.”

Maryland will remain on the road to take on Wisconsin on Sunday.

The Big East Conference has postponed two upcoming Georgetown games after a positive COVID-19 test within the program.

The two conference games against Marquette and Providence scheduled for Jan. 16 and 20, respectively, were on the road. No rescheduled date has been determined at this time.

It is the second time in a week where games were postponed for the Hoyas. Their Wednesday home game against DePaul was called off hours before tipoff for COVID-19-related reasons.

Georgetown is on a five-game losing streak, falling at Syracuse 74-69 Saturday.

The Hoyas will not play until Jan. 26 at Xavier.

American’s season remains on hold after another cancelation

American has yet to play a game this season. It will continue to wait after a member of the basketball team tested positive for COVID-19, forcing Patriot League officials to cancel American’s games against Lehigh for this weekend.

It is the second time a slate of games for American has been postponed. The Eagles had their season-opening games against Loyola on Jan. 2 and 3 postponed due to a positive COVID-19 test in the Greyhounds program.

American will hope to start its season on Jan. 16 and 17 with two road games against Navy.

Last season, the Eagles finished with a 16-14 record and suffered a first-round loss against Bucknell in the Patriot League Tournament.

The Sports Pulse’s Mario Amaya contributed to this story.