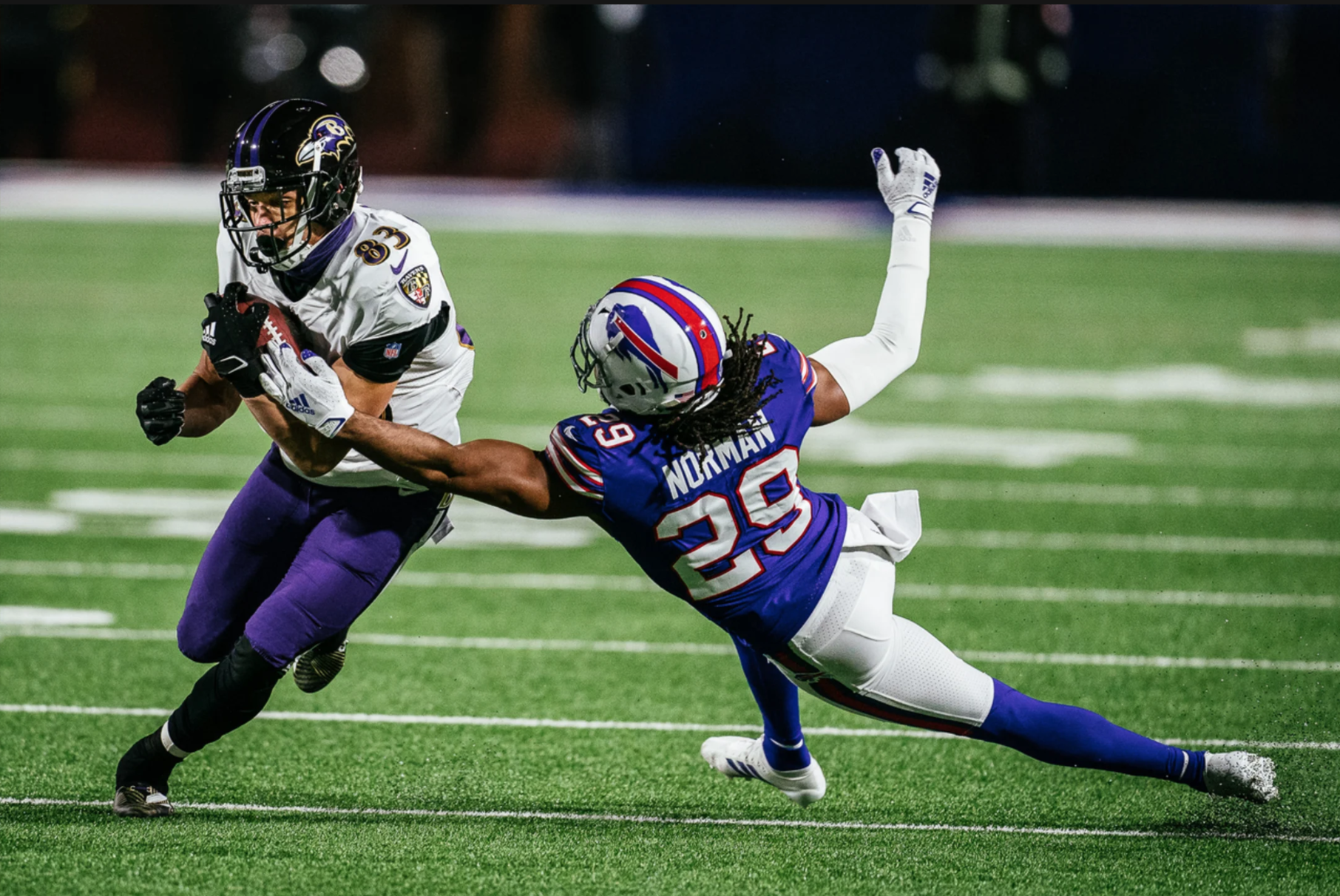 A timely turnover and a strong defensive effort were enough to help the Buffalo Bills defeat the Baltimore Ravens 17-3 in the AFC divisional round of the NFL playoffs Saturday.

Coming off a 20-13 victory over the Tennessee Titans in the AFC Wild Card round, the Ravens hoped to use its defense, ranked No. 2 during the regular season, to stop quarterback Josh Allen and the Bills offense. Entering Saturday, Buffalo finished the regular season with the No. 2 offense in the NFL with 6,343 total yards while averaging 31.3 points per game.

However, an expected offensive battle turned into a defensive war, with both teams averaging less than 5 yards per play.

Baltimore had a chance to strike first, but kicker Justin Tucker missed a 41-yard field goal on their opening drive. Tyler Bass of Buffalo took advantage of Tucker’s miss and scored his 28-yard field goal to give the home team an early 3-0 lead.

Battling windy conditions, both offenses struggled to push ahead, making special team success vital. Tucker missed again from 46 yards early in the second quarter but nailed a 34-yarder before halftime to tie the game, 3-3.

The second half lent its way for Buffalo to break away after wide receiver Stefon Diggs caught a 3-yard pass in the end zone for the game’s first touchdown.

In Baltimore’s ensuing possession, quarterback Lamar Jackson drove the Ravens down to the red zone in 15 plays and looked poised to score. However, a pass to the middle of the end zone was picked off by cornerback Taron Johnson. The Sacramento, California, native scamped down the field to return the interception 101 yards for a Bills touchdown.

Things only got worse for Baltimore on their next drive as Jackson sustained a concussion on the final play of the third quarter and was removed from the game. He finished the game throwing 14 of 24 for 162 yards passing while being limited to 42 yards rushing and sacked three times.

“He said he’s fine from the concussion, but he’s frustrated that we were that close, and we didn’t get to finish drives,” wide receiver Willie Snead IV said of Jackson. “He’s just the ultimate competitor. He doesn’t like to lose, and he knows that he can get better. He sees the plays afterwards; he knows that he has to be better at reading through zones and stuff like that.

Tyler Huntley stepped in for Jackson with Baltimore trailing 17-3. In his two full drives, the rookie led the Ravens into Bills’ territories but could not equalize.

Baltimore’s rush attack, the best in the league during the regular season, could only muster 150 yards, 42 of which came from Jackson.

“The Bills played a very good football game in all three phases. They were mistake-free and capitalized on their opportunities,” said Ravens head coach John Harbaugh. “It’s a tough loss, but I’m proud of the guys none the less.”

Baltimore’s season ends after it overcame a COVID-19 outbreak, critical injuries on both sides of the ball, and Jackson’s growing expectations. It claimed its third straight playoff berth after going on a five-game winning streak to end the regular season and won its first playoff game with Jackson under center.

“This team has been through a lot; it’s a resilient team with COVID and everything that has gone on,” said Ravens tight end Mark Andrews. “This is a special team and a team I will remember forever.”