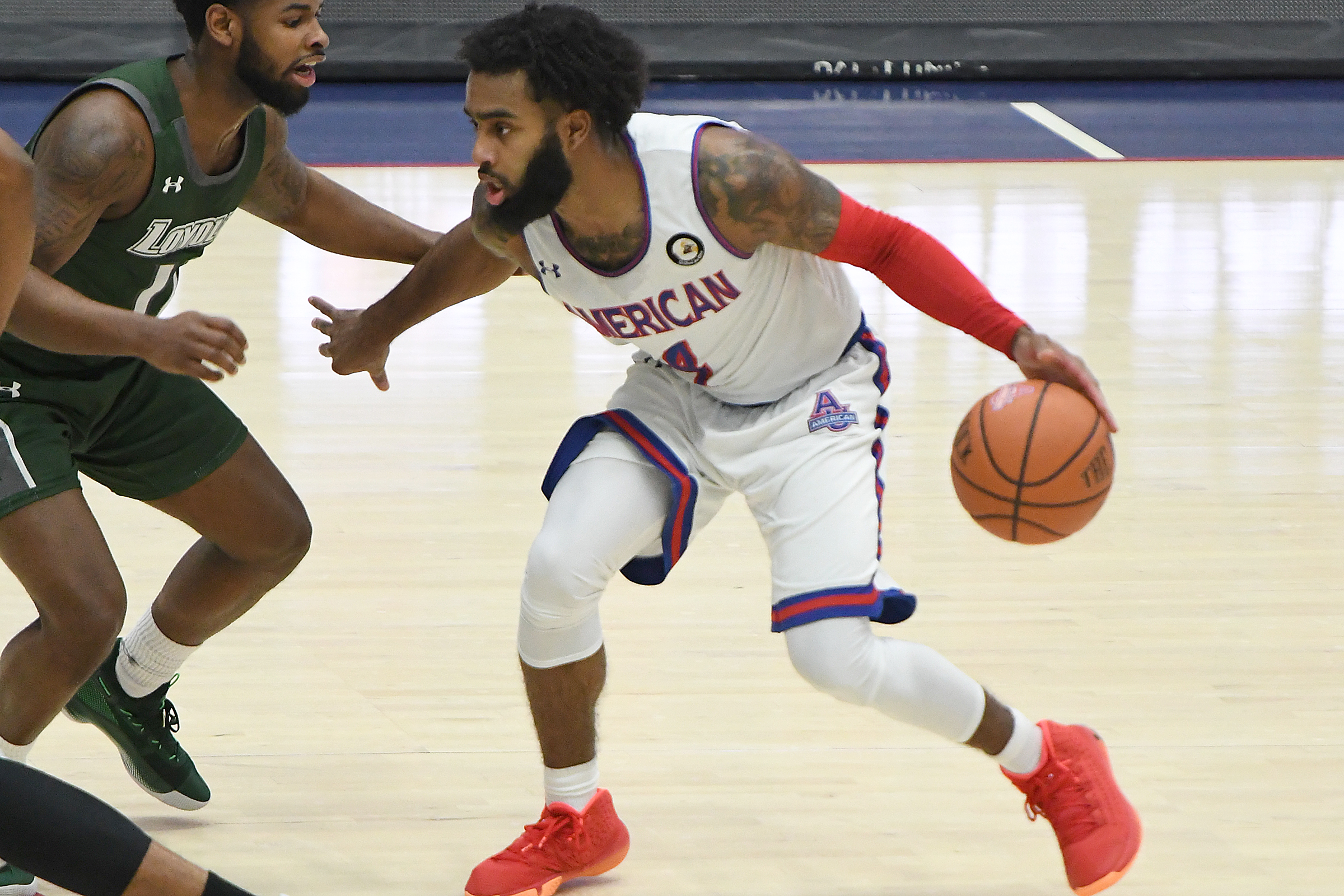 Down a point against Loyola Maryland Sunday with six seconds remaining, American’s Jamir Harris took the ball and knew what to do.

The New Brunswick, New Jersey, native quickly dribbled down the middle of the court unguarded until he passed midcourt. As a player closed in to guard him, Harris launched a 35-foot 3-pointer. The shot clanked off the rim inside the hoop, causing the Eagles’ bench to erupt in celebration.

“We knew he was an elite shooter,” American head coach Mike Brennan said of Harris. “But he’s added so much more to his game, and that’s allowing him to get even more shots and making him a better player.”

Harris’ last-second 3-pointer, along with a career-high 33 points, helped guide the Eagles (2-2, 2-2) past the Greyhounds, 81-79 in triple overtime, to earn the series sweep.

The win came as Harris tied a school record with nine 3-pointers in a single game. It was also the first triple-overtime win for American since 2000.

For the senior, the season has been about embracing a new role. With six freshmen on the roster, American needed a new leader following the graduation of senior Sa’eed Nelson.

After scoring a team-high 23 points in the Eagles’ 71-70 win over the Greyhounds (0-4, 0-2) on Saturday, Harris said he sees his teammates grow with confidence, especially as three of American’s first four games have come down to the final possession.

“It goes a long way, especially with the amount of young guys and freshmen we have,” Harris said. “The experience of those tight games, even if we don’t win, is huge for them. Just to know going to the next game what mistakes you made late in the game that we don’t want to make in the next one. It is a huge advantage for us to go through those hard times as a team.”

Up next for American is a back-to-back series against Lafayette, starting with the home tilt at 2 p.m. Saturday. The second game will take place at 4 p.m. in Easton, Pennsylvania.

After defeating No. 17 Minnesota 63-47 Saturday, Maryland prepares for two critical in-conference home games that could define their role in the NCAA Tournament.

The win against the Golden Gophers was the first time Maryland defeated three ranked opponents on the road in a season. The Terrapins (9-7, 3-6) jumped out to an early 17-3 lead and never trailed for the rest of the game. Eric Ayala led the way, scoring scored 14 of his game-high 21 points in the first half.

Maryland dominated defensively in the second half, suffocating Minnesota (11-5, 4-5), who went over six minutes without scoring a field goal. The Gophers shot 30.4% from the floor, including scoring only 5 of 23 from 3-point range.

“We locked in defensively from the first possession,” Maryland head coach Mark Turgeon said. “Guys were dialed into the game plan…defensively, we were terrific.”

All focus turned to Wednesday when Maryland faces off Wisconsin, whom they defeated at 70-64 in late December. The Badgers (12-4, 6-3) remains one of the top three teams in the Big Ten despite losing 74-62 to Ohio State Saturday. Maryland then hosts Purdue on Tuesday.

While he doesn’t believe his teammates think about their current record or their standing for the NCAA Tournament, Ayala said the next pair of games would be necessary for Maryland in their fight for a postseason run.

“It is important for us to keep getting big wins and rallying together wins away and at home,” Ayala said.

Georgetown prepares for their first game in three weeks as they host Providence Saturday.

The Hoyas (3-8, 1-5) had their season put on hold due to COVID-19-related issues within their program. Four games were postponed, including a home matchup against DePaul on Jan. 13 called off hours before tipoff and, recently, Tuesday at Xavier.

Georgetown sits tied for last place in the Big East, is on a 5-game losing streak, and have not won a game since December. They will be taking on a Providence squad who earned an upset victory over No. 11 Creighton last week and hung strong against No. 3 Villanova on Saturday.

They will need Jahvon Blair to carry the offensive load. The senior guard is averaging a team-high 18 points a game. In the Hoyas’ last game against Syracuse, Blair finished his double-double performance with 16 points and 10 assists while also collecting four rebounds.