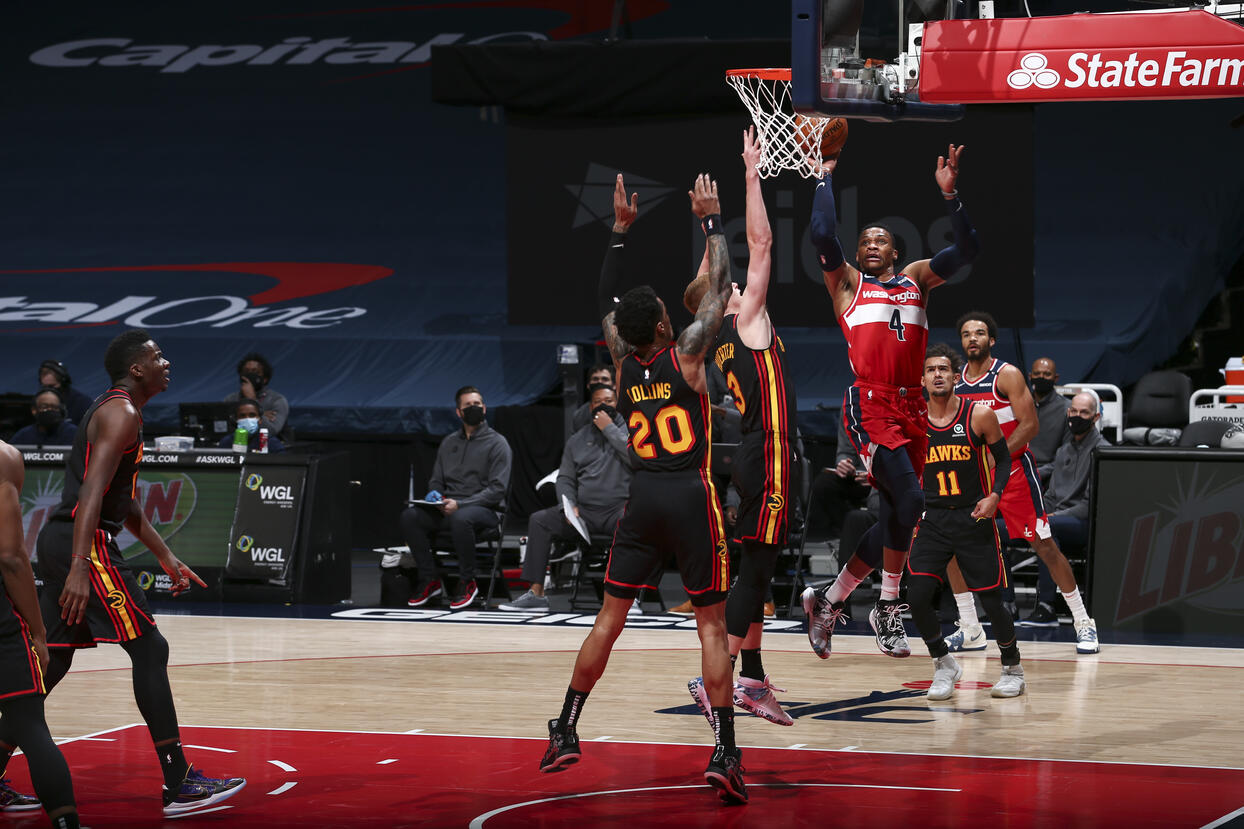 In the first of three games at home, the Wizards (3-12) could not stop Trae Young, who scored a game-high 41 points, including five 3-pointers, and provided five assists.

Washington received positive news before tipoff as Rui Hachimura and Davis Bertans were off the health protocol list and back on the gameday roster. However, in their first game back, both players struggled early.  Bertans missed his first seven 3-pointers, and Hachimura shot 33% from the field in the first half.

Atlanta (10-9) created some breathing room with a 14-5 run, including four 3-pointers, three from Danilo Gallinari (11 points) in the closing moments of the first quarter.

“I had a feeling that this could possibly happen tonight because of all the guys coming back, coming back from a road trip,” Washington head coach Scoot Brooks said of his team’s offensive struggles. “We were just out of sync.”

The Wizards responded and cut their deficit down to three points after Westbrook drilled a 3-pointer on a 9-0 run. The Hawks snatched back the momentum with a 9-0 run and retaking the lead. Despite a late push by Westbrook, Atlanta outpaced the Wizards to close out the half, 14-7, to make it an 11-point game at halftime.

Atlanta opened the third quarter flying away on a 13-3 run and creating an 18-point cushion. Things only got worse for Washington as Beal drew a technical foul after arguing with referees on a no-call decision as he got hit going to the rim for a layup.

Moments later, after drawing a delay of game call at the free-throw line, Robin Lopez defended his teammate loudly from the bench. The interaction with officials led to Lopez drawing two quick technical fouls, ejecting him from the game.

The Hawks’ lead grew as large as 23 points before the third quarter ended. As the game waned on, Washington’s frustration levels grew. Point guard Rajon Rondo prodded Wizards players multiple times, including Westbrook. He was ejected with 10 minutes to go after pushing Rondo following a Garrison Matthews 3-pointer.

“Honestly it’s more on me,” Westbrook said. “I cannot allow myself to stoop down anybody’s level. That’s not my character, who I am…It’s on me to control myself, control my own emotions, so I take full responsibility for all of that.”

Meanwhile, Beal only played 31 minutes and was having a subpar shooting night until the second half. He came alive late in the fourth quarter, scoring 13 points, for a late-game push to get the Wizards within 10 points. However, Young scored 18 fourth-quarter points, including two consecutive 3-pointers to thrust Atlanta’s lead back to 14 with over four minutes remaining.

“I had a horrible night,” Beal said. “Crap night, so I take it on the chin. I gotta be better; I told the guys, ‘I gave them nothing tonight’ so I gotta be a lot better.”

The Wizards expect to have their full roster available against the Brooklyn Nets on Sunday, Brooks said. The team also announced two makeup road games before the All-Star break: against the Miami Heat on Feb. 3 and at the Boston Celtics on Feb. 14.