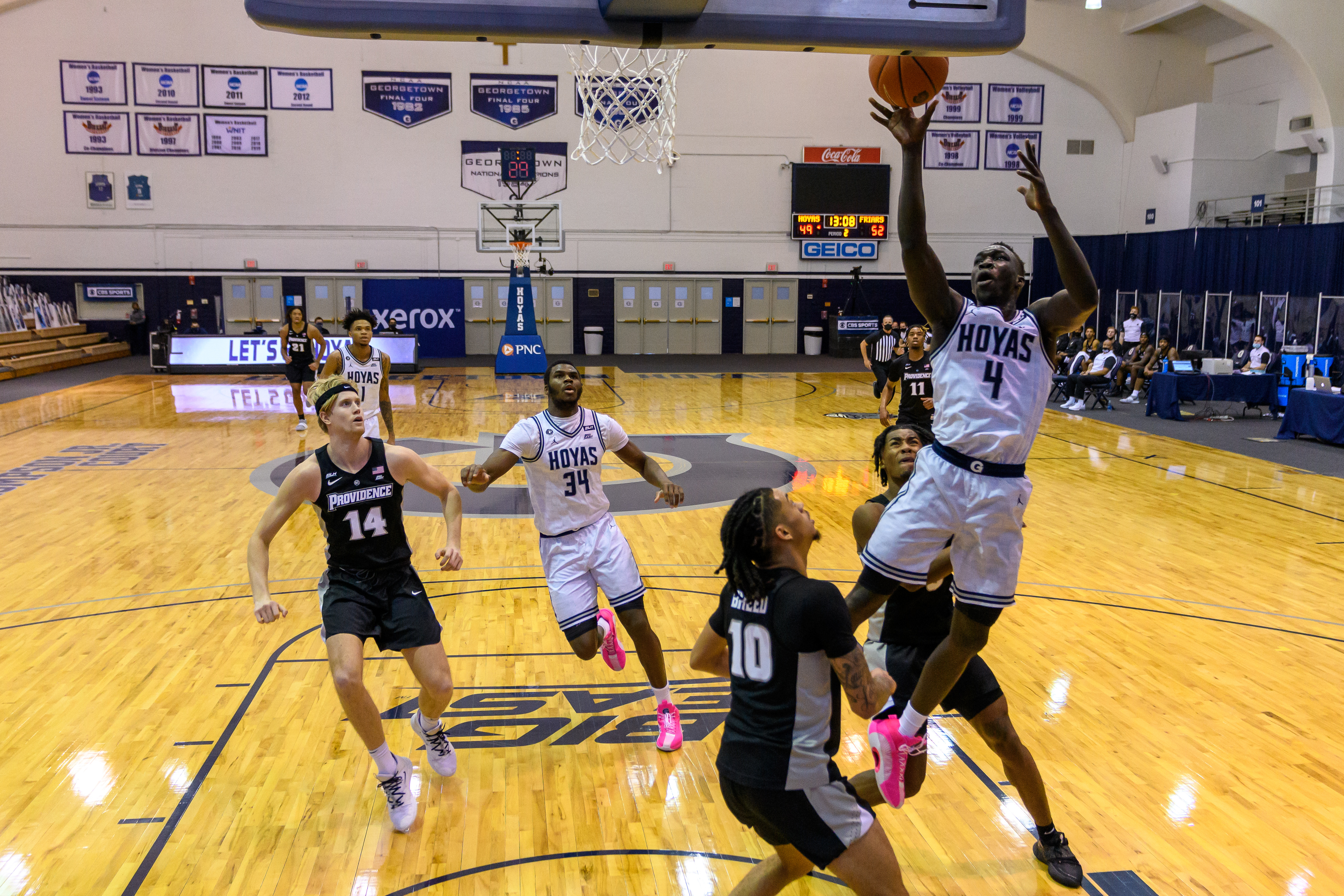 After being down by as many as 15 points, the Hoyas managed to snatch a late victory against Providence 73-72 at home in a thriller.

“It feels good. I am happy that we got the win … I feel that I am starting to get more comfortable with the system and knowing where I am going to attack and get my shots.

It felt good to get this win for sure, to get back on the winning side,” said graduate transfer Chudier Bile who had a big day coming off the bench as he was the team’s leading scorer with a season-high 19 points, including 10 rebounds, and went 10-of-12 from the free-throw line.

It was Georgetown’s (4-8, 2-5) first game since Jan. 9 after putting their season on pause for three weeks due to COVID-19 related issues.

Providence (9-8, 5-6) jumped out to an early lead thanks to a 10-0 run kicked off by a pair of 3-point shots from junior guard A.J. Reeves, and he would finish the night with a career-high 28 points.

In the latter part of the first half, Providence had a 29-14 lead against the Hoyas, which was cut significantly thanks to an 8-0 run by Georgetown.

For the remainder of the first half, Georgetown kept the deficit to seven points until a 3-point shot from senior forward Jamorko Pickett late in the half, which cut the lead to four going into halftime. Pickett finished the night with 10 points.

A bucket from Pickett, followed by Bile’s 3-pointer, gave Georgetown a one-point lead to open up the second half. Providence retook the lead, and the game would go back-and-forth until the final minute of the match.

After the Wahab’s shot gave Georgetown the go-ahead lead late in the game, Providence would have one last chance to win the game after earning two trips to the free-throw line in the dying seconds of the game.

After making the first free throw, the Friars missed their second attempt from the line, and Wahab secured the rebound at the buzzer to secure the win for Georgetown.

“He was huge today. He had 19 points 10 rebounds. He got to the free-throw line 12 times, made ten of them. He did a pretty good job defensively … so he was huge,” said Georgetown Head Coach Patrick Ewing about Bile’s performance after the game.

“I talked to him after the game [and] I said this what I expected from me when I got you, you know, to be able to do things like this, you know he’s that type of athlete.”

Georgetown will travel to Omaha, NE, on Wednesday night to take on Crieghton in the first slate of back-to-back games. Tipoff will be at 9 p.m. and televised on FS1.