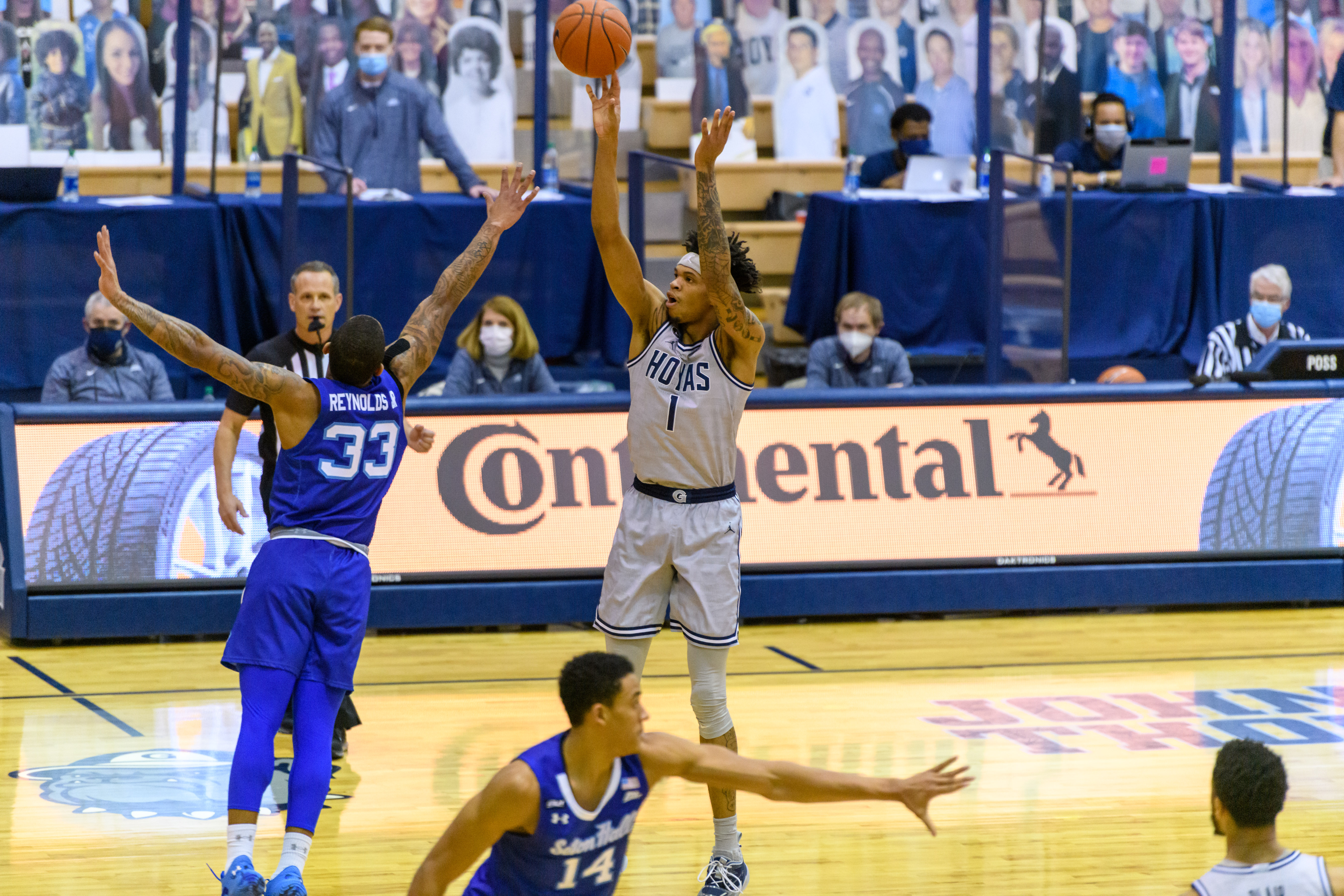 WASHINGTON – For the second game in a row, Georgetown had five players score in double digits as they defeated Seton Hall 81-75 Saturday night.

The Hoyas (7-10, 5-7) outshot their Big East Conference foe for the victory, going 50% from the floor and 62.5% from the 3-point range. Senior Jamorko Pickett led the way, scoring a season-high 20 points, going 8 for 11 in field goals and shooting 100% of his 3-point attempts. The D.C. native added seven rebounds, three assists and two blocks in Georgetown’s win.

Both teams matched each other on their opening possession to start the game. However, a Pickett 3-pointer gave the Hoyas an early lead and a chance to breakthrough. Georgetown led by as much as 12 points before Seton Hall (13-9, 10-6) fought back, thanks to a pair of 3-pointers from senior forward Sandro Mamukelashvili (22 points).

The Hoyas maintained a three-point advantage entering the second half, but Mamukelashvili sparked a quick 7-0 run for the Pirates. The visitors’ short lead did not last as Georgetown fought back to regain control after Pickett scored his second 3-pointer of the contest.

A pair of four-point plays from Donald Carey (11 points) gave the Hoyas a 71-67 lead with just five minutes left in the game. Georgetown sealed their victory in its final moments as it connected with 4 of 6 free throws. With the win, Georgetown has won four of their last six games since returning from their midseason pause due to a COVID-19 outbreak.

“Basketball is a sport of runs. We made our run first; they made their run,” Georgetown head coach Patrick Ewing said. “The team that makes the run at the end is usually the team that wins, and we were able to keep our composure and make our run at the end.”

Following Harris’ standout performance, former Hoya guard Jagan Mosely said on Twitter that he could be one of the best guards in the Big East. Harris agreed with the compliment during his postgame press conference, saying the “sky’s the limit” on his potential.

“I still got a lot of work to do,” Harris said. “I’m never going to be satisfied with one game or one good day, so I want to get back in the gym tomorrow [and] see what I can do better [and] to watch film.”

The Hoyas will end their four-game homestand against UConn Tuesday night. The game, initially scheduled for December, was postponed due to COVID-19 concerns. It will tip-off at 9 p.m. and broadcast on FS1.