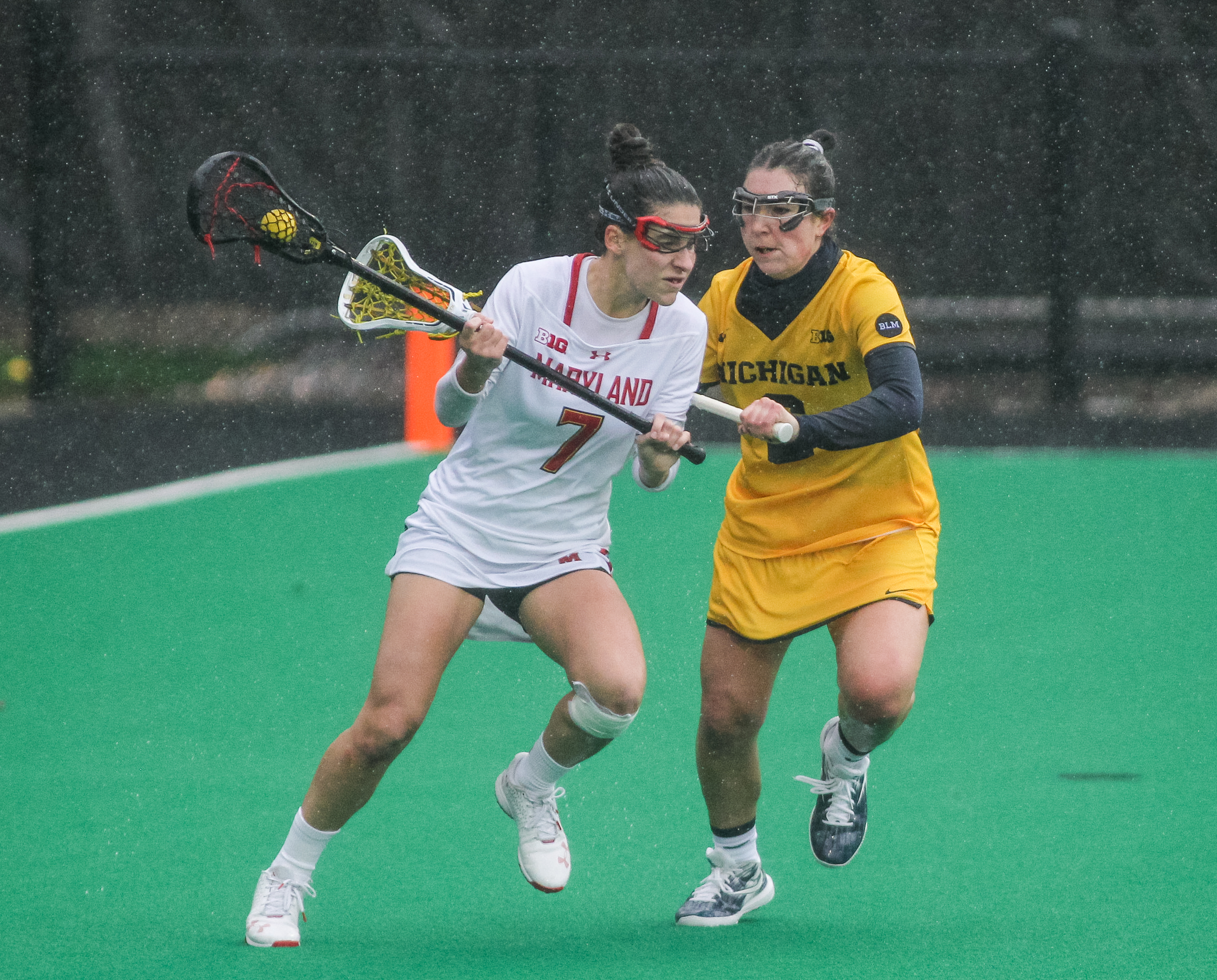 On Sunday afternoon, the Terps took care of business, despite being down 4-1 early on in the contest, as they rallied for the 12-9 victory and the regular season sweep over the Wolverines.

“It wasn’t pretty,” said Maryland Head Coach Cathy Reese. “But I’m really proud of our team for finding a way to pull out a win against a really strong Michigan opponent.”

Within the first 20 minutes of the game, the Wolverines jumped out to a 4-1 lead, courtesy of goals scored by Maggie Kane, Caroline Davis, Annabelle Burke, and Caitlin Muir. Fifth-year student Brindi Griffin scored the first goal for the Terps.

That exact moment is when senior Grace Griffin began her terrific performance with two unassisted goals to cut the deficit to 4-3 with under nine minutes left in the first half.

“We just finally started playing together,” said Grace Griffin. “We finally got our slides figured out. We’re playing for one another, not one-girl focus, and I think that really helped.”

Then, at the 7:30 mark, sophomore Hannah Leubecker made a nice spin move and fired away for the tally to tie the game up at 4-4.

However, Michigan retook the lead, courtesy of a goal scored by Nadine Stewart, but senior Hannah Warther then scored a wraparound goal to tie it back up at 5-5.

Leubecker eventually scored on the free position shot to give the Terps the lead, while sophomore Libby May added another point to the board to extend the lead to 7-5, and Warther scored once again with 22 seconds remaining to make it 8-5 at the half.

However, Michigan didn’t give up as Kaitlyn Mead recorded a hat trick early on in the second half, while Griffin scored for the third time to record a hat trick of her own, with Maryland leading 9-8.

Maryland then went on a three-goal run to put the game out of reach as Griffin added a fourth tally to her impressive performance. Sophomore Victoria Hensh put the ball in the back of the net, and Leubecker recorded a hat trick as well.

“Hannah was hot on Friday,” said Reese. “Then we started to see some doubles a little earlier, which is what we expected.”

Griffin was the MVP of the day with four goals while also scooping up a career-high five ground balls.

“When Grace is over at the midfield, she can control that top area, which is where a lot of our looks were coming from today,” said Reese. “I think she’s one of the top 1v1 defenders out there.”

The Terps defense also stepped up on Sunday afternoon, holding the Wolverines to just 13-of-19 on clears and causing 13 turnovers. May and redshirt senior Lizzie Colson each caused three turnovers.

“We always set goals on defense,” said Colson. “And that’s on the goals chart, in the locker room, and that’s a big focus of ours.”

With the win, Maryland Women’s Lax is now 2-1 and will next head over to Baltimore to face Johns Hopkins on Wednesday, March 10 at 4:00 pm.