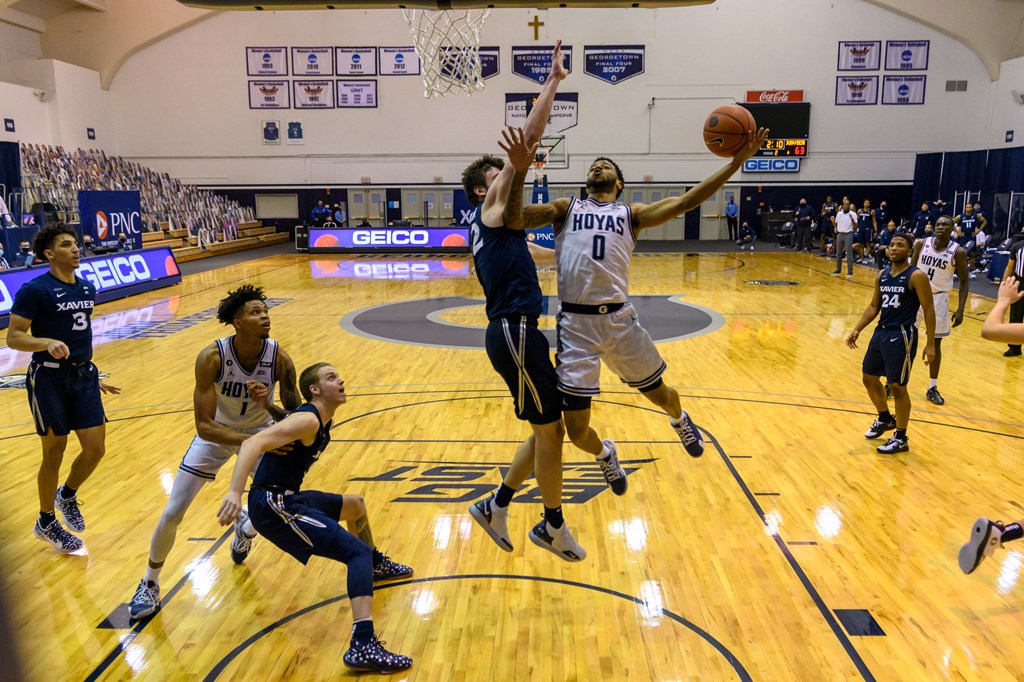 The result is the Hoyas’ (9-11, 7-8) fourth win in five games. It comes after Georgetown’s dominating performance in their 68-60 victory at DePaul Saturday, where they shot over 41% from the field, and three players score in double figures.

All three seniors, Jamorko Pickett, Jahvon Blair and Chuider Bile, provided huge performances in their final home games as Hoyas. Pickett scored a game-high 18 points and collected seven rebounds. Bile became the second Hoya this season to have consecutive double-double performances thanks to his 16 points and 11 rebounds. Blair scored 12 points and led the team with three assists.

After both teams started slow and trading buckets, Georgetown broke free with an 11-2 run, starting with a Qudus Wahab (13 points) layup, to take a 10-point lead late in the first half. Another late burst helped the Hoyas enter halftime with a 38-23 lead.

Georgetown increased its advantage by as much as 17 points early in the second half. Xavier (13-6, 6-6) attempted to rally behind a 12-3, featuring two 3-pointers, to cut their deficit down to nine.

Musketeers’ sophomore KyKy Tandy connected with a 3-pointer with less than five minutes remaining to cut the Hoyas’ lead down to three.

The game suddenly became reminiscent of earlier losses in the season, where coach Patrick Ewing was left speechless in postgame press conferences after the Hoyas lost a big lead.

Against Xavier, Georgetown gave away too many offensive rebounds and second point opportunities in the second half, Pickett said. However, with the experience of losing a big lead, the Hoyas were able to stave off a Musketeer rally to win their home finale.

“It wasn’t our first time in a situation like that,” Pickett said. “Going into the Villanova game, it was the same way; we had a big lead at halftime. [In] the Butler game, going into the halftime or 10 minutes left in the game, we have a big lead, and we just relaxed.”

Georgetown’s regular-season finale will be on the road against Connecticut Saturday at noon. In their first meeting a couple of weeks ago, UConn earned a comfortable 70-57 victory in D.C.

Ewing said his Hoyas must be prepared and practice hard this week to get ready for the Huskers.

“I do believe we’re playing our best basketball,” Ewing said. “Our defense is right there, and if we continue to move the ball and share the ball, our offense will be right there.”