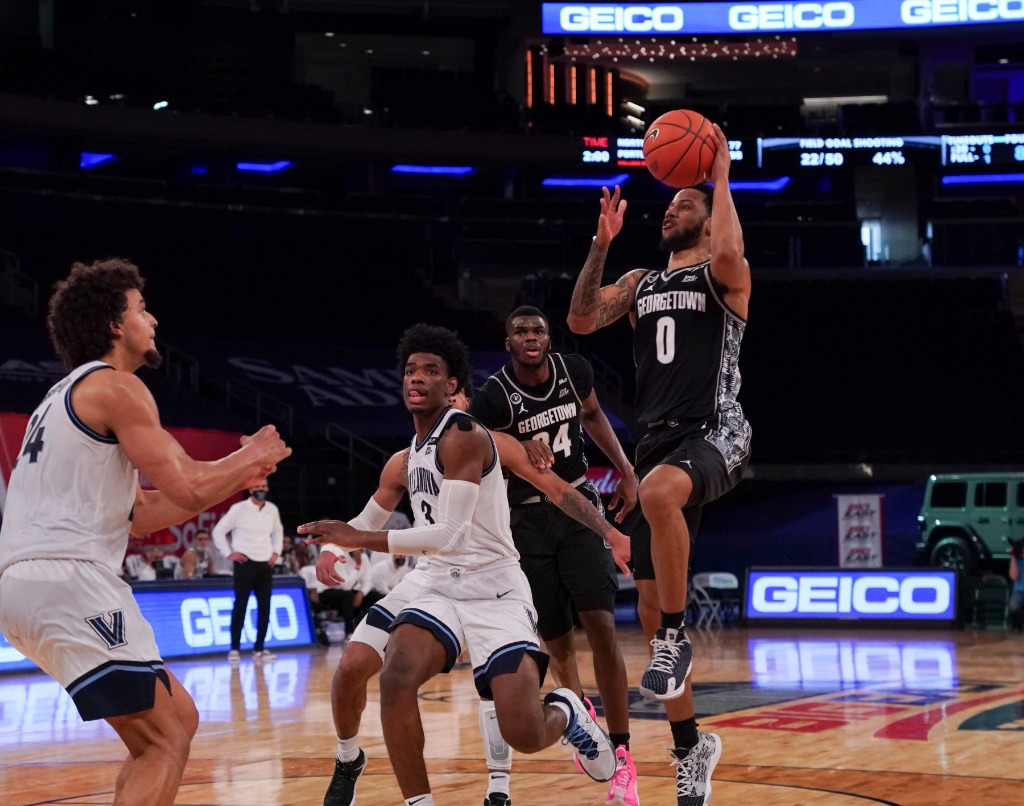 NEW YORK – After an impressive showing in their Big East Tournament debut against Marquette Thursday, Georgetown was looking to make a statement against top-seeded Villanova.

In a game that went down the wire, the Hoyas pulled off the tournament’s biggest upset as they defeated the Wildcats 72-71 Thursday afternoon.

The game’s pivotal moment was in the last 4.7 seconds as freshman guard Dante Harris drew a foul and converted a pair of free throws to give the Hoyas a one-point lead. Georgetown head coach Patrick Ewing was originally set up for Jahvon Blair to take the final shot.

“We did a dribble handoff with Dante, and once they switch to have the big (Villanova forward Jeremiah Robinson-Earl) on him, I told him to go, just go downhill and make a play,” Ewing said. “He was able to go downhill, get contact and get the ball up on the glass.”

Harris’ free throws clinched a perfect day behind the charity stripe for Georgetown (11-12), as they went 23 for 23 from the free-throw line, setting a Big East Tournament record. After Harris sank his second free throw, Villanova attempted a last-second 3-pointer as time expired, but the shot smacked off the backboard and away from the rim, leading to a Hoyas’ celebration.

“We just played together, kept fighting.” Harris said. “I told my guys to never give up, and coach always told us to keep fighting as well, so we just continued to play together and keep fighting, and we can beat anybody.”

Villanova (16-6) started strong by taking a commanding 9-0 lead thanks to a pair of buckets from senior guard Jermaine Samuels (20 pts). Georgetown responded quickly with an 11-0 run, which started after a three-point play from Qudus Wahab (17 pts).

Both teams traded buckets until Villanova regained control with eight unanswered points. Once again, Georgetown pushed back, finishing the first half on a 7-0 run to head into halftime with a slim 37-35 lead.

The Wildcats dominated the start of the second half by scoring 10 unanswered points and looking poised as they possessed an 11-point lead at one point. Georgetown, determined to keep their season alive, fought back, embarking on a 15-1 run, capped off by a Blair (14 pts) 3-pointer to give the Hoyas a one-point lead with 5:06 remaining.

Villanova reclaimed a five-point lead late, but it was short-lived as Georgetown tied the game at 70 with 40 seconds left in the game. With 19 seconds, Wahab fouled out, which allowed Jeremiah Robinson-Earl to head to the free-throw line for the Wildcats. The sophomore forward made one of the two shots, giving Villanova a one-point lead before Georgetown’s game-winning sequence.

Georgetown advances to the semifinals of the Big East Tournament for the first time since 2015. They will face off against fifth-seeded Seton Hall on Friday at 6 p.m. The Hoyas and the Pirates split their regular-season series.