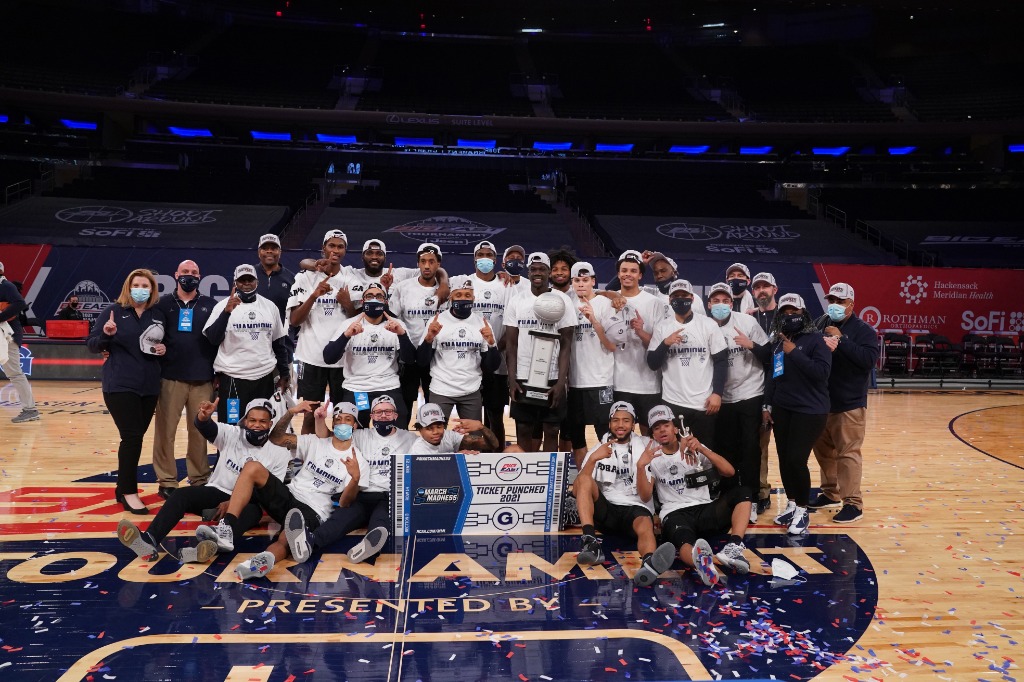 NEW YORK – Georgetown capped off a stunning weekend in the Big Ten Tournament with two convincing performances to capture the title. After taking down fifth-seeded Seton Hall 66-58 in Friday’s semifinals, the Hoyas dominated No. 2 Creighton 73-48 Saturday to win the program’s first Big East Tournament Championship since 2007.

The win also earned the Hoyas (13-12) an automatic bid into this year’s NCAA Tournament. For head coach Patrick Ewing, watching his players celebrate the eighth tournament championship in program’s history, something many did not predict would happen, means “everything.”

“It’s not where you start, it’s where you finish,” Ewing said. “That’s something I’ve been talking and preaching to my kids from the day we came on campus and the day the (coaches’ poll) came out. I can’t do anything but applaud my guys. We’ve been through a lot. We had a (COVID) pause, we came out of the pause with flying colors, and now we’re on our way to the Big Dance.”

After Georgetown jumped out with an early 11-4 advantage in the first half, both teams traded the lead multiple times, with the Hoyas entering halftime with a 36-34 lead. With less than two minutes left in the second half, Georgetown began to pull away after a late 9-1 run, capped off by Pickett making both his shots from the free-throw line to win the game.

“It means a lot,” Pickett said Friday. “We haven’t been to the championship since 2010. So, we’re long overdue, especially with all the adversity we overcame this year.”

In Saturday’s final, Creighton took an early 13-6 lead, but Georgetown quickly responded by scoring seven unanswered points. As momentum began to shift, guard Jahvon Blair scored eight straight points, giving the Hoyas an eight-point advantage late in the first half. The D.C.-based squad dominated possession and completed an 18-0 run to enter halftime with a 36-18 lead.

Georgetown’s offensive prowess continued into the second half as they went on a 16-3 run, including scoring 14 straight points. Chudier Bile, who scored a team-high 18 points, was key during the streak with a pair of 3-pointers.

While the Blue Jays found their scoring touch midway through the second half, Georgetown refused to surrender. A putback dunk with less than a minute to go solidified a 25-point win, the second-largest margin of victory in a Big East Tournament Championship game.

Blair scored 18 points coming off the bench, while Qudus Wahab recorded his seventh double-double of the season with 11 points and a game-high 12 rebounds.

“It means the world,” Blair said about winning the Big East Title with Ewing. “It’s his first time. It’s my first time, Jamorko’s first time. We started with him on day one. Just to see how happy he is just makes me happy. Everyone’s happy.”

Dante Harris added 10 points and a career-high eight rebounds before being awarded the David Gavitt Trophy for the tournament’s most outstanding player. He became the 10th Hoya player to win the award and the first since Jeff Green in 2007.

Georgetown will enter its first NCAA Tournament since 2015 as a No. 12 seed and will take on fifth-seeded Colorado Saturday at 12:15 p.m. It has been a long process for the Hoyas, but Ewing said he believes his players are on a path of success going forward.