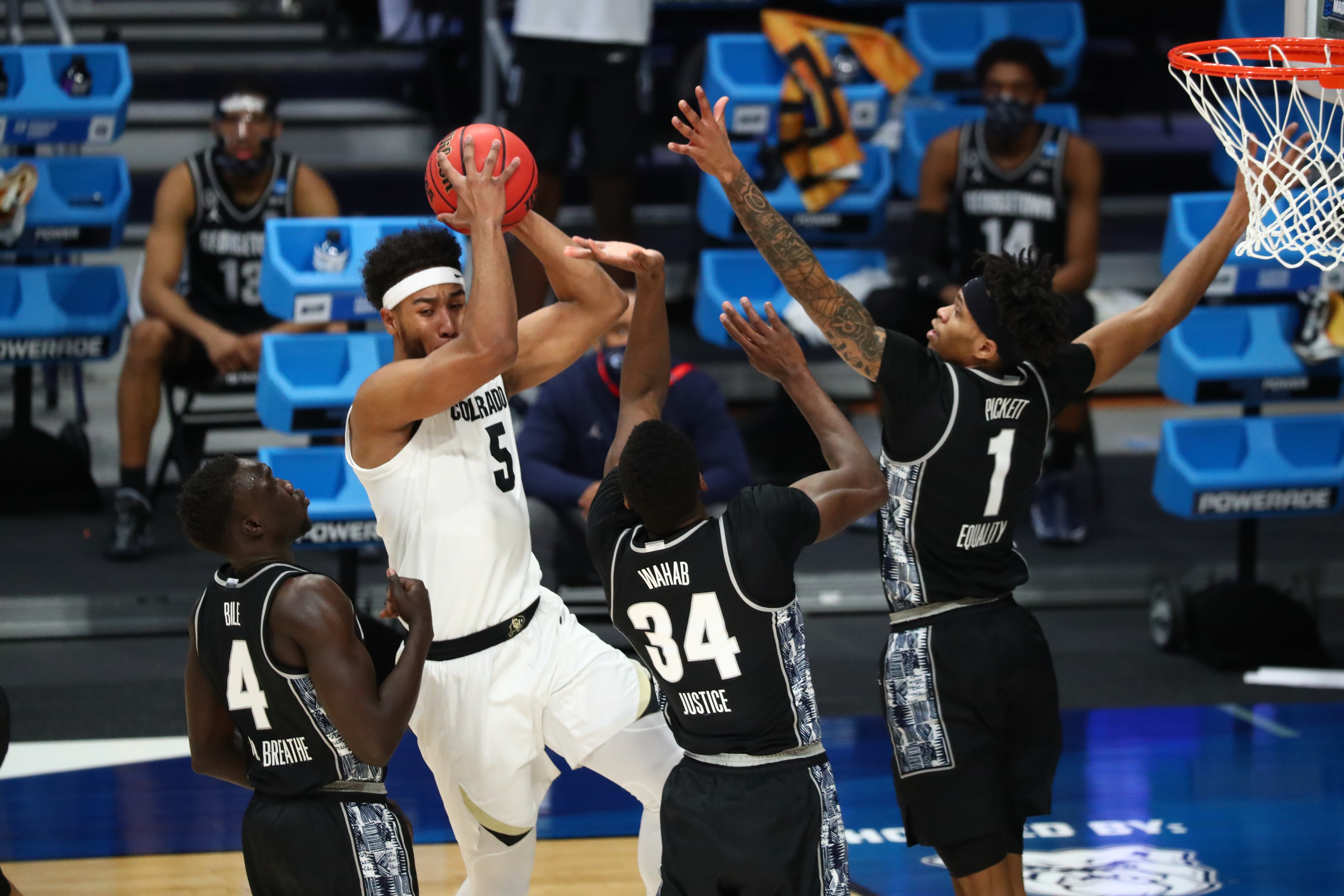 INDIANAPOLIS – The Georgetown University Basketball squad rolled into the 2021 NCAA Men’s Basketball Tournament in Indianapolis this week with their confidence at an all-time high.

After stringing together four games in four days to win the Big East Tournament in New York last week, the Hoyas were looking to continue their momentum into the tournament coming in as a No. 12 seed.

The Hoyas looked to get another statement win against the No. 5 Colorado on Saturday.

However, that was not to be as the Buffaloes steamrolled past the Hoyas 96-73, ending their run in the NCAA tournament prematurely.

“We didn’t bring our ‘A’ game, both offensively and defensively,” said Georgetown Head Coach Patrick Ewing. “The things that we were doing great in the Big East tournament, we didn’t do well today.”

Qudus Wahab and Donald Carey led the way in the scoring department for Georgetown (13-13). Wahab finished with his seventh double-double of the season, recording a career-best 20 points and recorded 12 rebounds. Carey scored 17 points, going 9-of-9 from the free-throw line.

Colorado (23-8) got big scoring help from freshman forward Jabari Walker, who scored a career-high 24 points, shooting 5-for-5 from the 3-point range.

Guards McKinley Wright IV and D’Shawn Schwartz combined for 30 points in the victory for the Buffaloes. Wright IV recorded a double-double with 13 assists to go with 12 points.

In the first few minutes of the game, both teams kept the contest close and struggled to get points on the board early.

However, Colorado jumped out to a 10-0 run to give them a 10-point lead early in the first half. Three Carey free throws and a layup from Wahab cut the Buffaloes lead to five points. Colorado would catch fire from 3-point range scoring an unanswered 11 threes to end the first half, to take a 47-23 lead into halftime.

“I would just say the one thing that surprised me was how well they shot the ball,” Carey said. “I think that was shocking to all of us. Credit to them for shooting the ball well, but on our end, we just didn’t defend as we should have defended the three-point line.”

Three consecutive Georgetown threes sparked a Hoyas 10-0 run in the second half gave them some hope to mount a comeback.

However, Colorado went on a 14-2 run to seal the win for the Buffaloes. At the end of the game, Georgetown went on a late 10-0 run to cut Colorado’s lead by 20, but that is as close the Hoyas would get in the score sheet.

“Overall, I’m very proud of our guys,” said Ewing. “Considering where they had us ranked, considering the obstacles that we had to overcome to get to this point. Naturally, I’m disappointed in the outcome, I’m disappointed that we didn’t play our best game, but I also have to take my hat off to Colorado. They played an outstanding game.”

This was Georgetown’s first appearance in an NCAA Tournament since 2014-15, finished at .500 with a 13-13 record, going 7-9 in Big East Conference play this season.